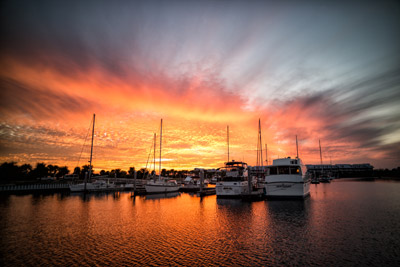 There is no beauty greater than this found anywhere else in the world. The warm weather in South Hillsborough is rivaled only by the warm spirit of the people who live there. I ask myself, “How could I leave such a place?” Mitch Traphagen photo.

A bare curly fluorescent bulb protruding from the ceiling lights the apartment across the street. I walk out of our apartment and look up and it seemed so stark and lacking in … joy. It actually depressed me to see it.

Walking out into the darkness of an unusually warm and humid Christmas Eve in the New York City area didn’t help. I step out our front door and there it is — the stark, bright, bare bulb. Even on Christmas Eve, there was no joy there. Especially on Christmas Eve.

And then I saw a flash of light down the street. Near the end of the block, a man was putting up Christmas lights on his balcony. That was nice to see. I then turned around and in doing so cast my eyes up to the apartment across the street. From that new perspective, a few dozen yards from my doorstep, I saw it: beneath that bare bulb protruding from the ceiling was a small Christmas tree, beautifully and colorfully lit, placed near a window at an angle that was not visible from my doorstep.

There was joy in there. Christmas was in there. It was the most beautiful thing I had seen that day.

That was a lesson for me — a life lesson. And now on the dawn of 2015, I believe I’ll be happier carrying forward the knowledge that a simple change in perspective can change everything.

This past year was a difficult one. I lost a very good friend in Brenda Knowles, the former editor and publisher of these newspapers. Later I lost my mother. Entertainers that I grew up with passed on, offering reminders both of life’s unforeseen troubles and the incessant passing of time. We left our longtime home in Florida to try a life in the New York City area. None of that has been easy; all of it demanded a change in perspective, although perhaps my changes weren’t for the best.

With the end of the year nigh, and all that comes with it, Michelle and I have been discussing whether or not we should move back to South Hillsborough. We’ve had the opportunity to experience life up here, it is in my opinion the greatest city in the world, but are we happier and better for it? There was no clear answer — which is remarkable because the New York City area and the Tampa Bay area have about as much in common as Venus and Mars.

I’ve not hidden my love for Florida, and South Hillsborough in particular. I miss much about living there. But just about the time we’ve decided it’s time to go home, we traveled to Manhattan on a warm evening before Christmas Eve and attended a wonderful and intimate show in a small theater — it was a show for artists to share their talents, all members of an organization called Artists Without Walls, and it opened with the co-founder of the organization, Niamh Hyland, signing “Have Yourself A Merry Little Christmas” and inviting the audience to join in, ringing with her beautiful voice. As I watched this — and felt it — I thought to myself that I really wanted to watch her sing it again next year. How on earth could we leave this?

But then I think back to the sunsets, palm trees, warm air, water and spirits of the people back in our home of 20 years and wonder, “How could I have left that?”

At the dawn of 2015, I find myself in need of a change in perspective — finding the ability to see reality (and beauty and friendship and so much more) for what it really is.

I am not protecting and serving, nor rushing forth in ambulances or fire trucks to save lives. I’m not laying a foundation for the future of this nation by teaching our children in schools. I have never been in combat. I have never offered the last full measure of my devotion. Many of you have. I am and shall remain eternally grateful to you all. I have, however, witnessed sadness, poverty and near hopelessness, and sometimes I’ve tried to help. I know that I am a blessed man in a blessed nation and that should be all the perspective that I need. But it isn’t. It’s time to walk down another sidewalk, to look at what I’m seeing in a new way. I know there is much to be learned. Not everything is as it appears to be — it’s often better.

One thing, however, is certain: I wish you joy, love and peace for 2015. May this year be your best ever. Whether or not we realize it, we are all on a journey to somewhere. Godspeed.