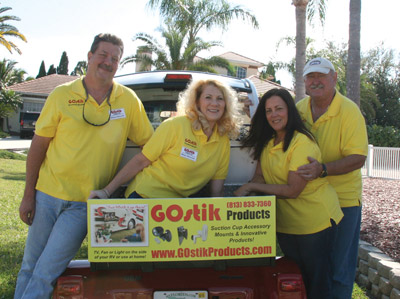 It all started in the garage of Apollo Beach resident Jody Whitmyer, a mechanical engineer, when his friend, Wayne Edmunds came to him asking for help on a sticky problem.  A mutual friend of theirs had purchased a brand-new RV, and was complaining that there was no TV on the outside of his coach, and no way to mount one without destroying the surface of his shiny new rig.

“I’m always up for a challenge,” said Jody, so he set to work helping to solve his friend’s problem.

Putting their heads together, and using industrial-strength suction cups, Jody and Wayne came up with a way to mount a flat-screen TV to the outside of their friend’s coach without drilling holes through its gleaming new exterior. Soon their other RV friends took notice and began requesting their own TV mounts. In no time, GOstik Products was born. 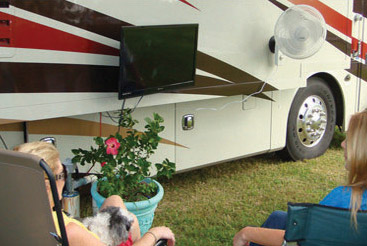 Today, with less than a year in business, GOstik is going national, expanding on its original suction-cup idea to develop other products, such as an oscillating fan and a motion-detection security light, both of which can be mounted to any smooth, nonporous surface. Jody and Wayne have included their spouses, Grace and Molly, respectively, as partners in the business, adding a unique blend of impressive skills and expertise to the GOstik mix.

Jody Whitmyer is a mechanical engineer and former owner of Whitmyer Biomechanix, a custom-fit wheelchair and rehab products company that manufactures head-support devices.  Gaining worldwide recognition, Biomechanix was on Inc. Magazine’s annual list of the 500 fastest-growing private companies in the United States in 1997.

Since moving to Apollo Beach in 1998, Jody sold his business to a large corporation and became “semi-retired” with wife Grace, a former occupational therapist specializing in quadriplegics.  A past president of the Apollo Beach Chamber of Commerce, Jody enjoys experimenting with new product designs and small-business ventures.  “People have no idea how many great companies start out as garage businesses,” he said. 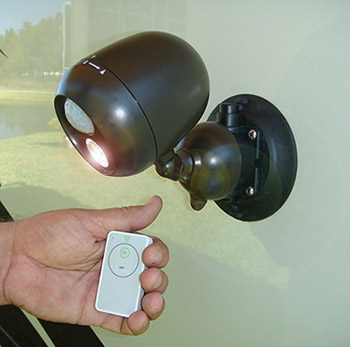 Expanding on its original suction-cup idea, the group is also developing other products, such as a motion-detection security light, which can be mounted to any smooth, nonporous surface.

Jody’s GOstik partner is Wayne Edmunds, who also owns and operates Universal Power Solutions LLC, which is currently designing an innovative power plug and receptacle that prevents people from plugging the wrong things into business outlets and potentially damaging computers and critical machinery.  Wayne is negotiating with a large corporation on purchasing his product, which will give him mass national distribution. Meanwhile, his wife, Molly Maxwell Edmunds, is the owner of Sure-Shut LLC, the manufacturer of a unique double-door security device. People may also remember Molly as the former mayor of Apollo Beach.

Even with their diverse backgrounds, the members of the GOstik team have one thing in common — they all love RVing and camping. Their development of new products is geared largely toward this favorite pastime.  GOstik has now penetrated the national market by making products available through Camping World, the nation’s number-one retailer of RVs, RV accessories and RV-related services. With more than 100 locations all over the U.S., plus thousands of high-quality RV, camping and outdoor products, Camping World offers everything imaginable to enjoy any outdoor adventure.

At www.campingworld.com, customers can browse through thousands of new and used RVs for sale, plus top-quality sporting and camping gear.

When asked when he finds time to enjoy his “golden years,” Jody just laughed and said: “Retired people aren’t just sitting around with their toes in the sand.  It’s a matter of staying active.”

For more information, or to order GOstik products, visit their website  at www.GOstikProducts.com.