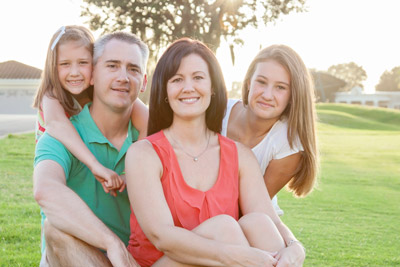 Friends have set up an account to raise money for the Reed family after the sudden death of 41-year-old Brian. He leaves behind two daughters, Marissa and Allison, and his widow Christie. Photo provided by Christie Reed.

Friends and family of Brian Reed, 41, who died earlier this month, are trying to raise $10,000 to help the family of the well-known manager of Weichert Realtors’ Apollo Beach Office.

Reed, who is survived by two daughters, Allison, 14, and Marissa, 9, and a wife, passed away Dec. 7 after a stroke.

“It’s so hard to put into words just how close our little family was,” said Christie Reed, Brian’s widow. “Brian and I tried to spend every waking moment together from work to any other activities we did. I was truly blessed to have spent 21 wonderful years with him.”

Brian and Christie worked for 13 years at Weichert Realtors Yates & Associates, where friends of the couple have established an online fundraising campaign to defray the Reed family’s huge medical bills and funeral costs.

Brian “worked mostly in Apollo Beach, Ruskin, Riverview and the Brandon area, so he will be very familiar to people there,” said Jeanette Yates, owner of Weichert Realtors Yates & Associates.

“He was just an awesome, honest, down-to-earth person,” Yates said. “He was fun-loving and was always joking and had a smile on his face.”

Reed starting working for Yates in 2001 as a Realtor before taking over the company’s Apollo Beach office Sept. 1. “He was extremely dedicated and loyal. People loved him,” Yates said.

Specializing in corporate relocation, Reed rarely returned to the office without a listing. “People knew he would do what he said he would do. He was very sincere,” Yates said.

Reed was also one of Yates’ top performers during often turbulent years in the Florida real estate market. “The relocation [business] was extremely important to us,” she said. “It got us through. He was a very big part of that.”

Reed’s passing came very suddenly. Suffering heart palpitations in 2012, he was prescribed a blood thinner after friends forced him to see a doctor. The medicine appeared to be working until he suffered a stroke Dec. 5 at work, where, according to doctors, a blood clot in Reed’s heart moved to his brain. He was dead within 48 hours.

“Shock would be an understatement,” Yates said. “He was probably the most most-loved Realtor in our company, and the outpouring from other agents in the office has just been incredible.”

Reed’s wife, who worked in the same office, was at school picking up their children at the time of her husband’s stroke.

“Her faith is the thing that is holding her together right now,” said Yates, “but [the family] is just making it day by day.” She said their girls “have not been able to go back to school. They just want to go to the cemetery every day.”

All funds raised for the family will go first to medical and funeral bills, but Yates would also like to help the Reed children. “We are hoping we can also help those little girls,” she said.

“The amazing thing about him is that the people who he worked with, buyers or sellers, didn’t just become a client to him, they became a friend,” said Judy Canup, the office relocation manager who worked closely with Reed. “He just had this way of getting to know people.”

While some couples might look askance at working with a spouse, the Reeds enjoyed it, Canup said.

“I would ask them if they ever got tired of one another, but they would say ‘no.’ They just got along beautifully and did everything together.”

“Brian was my best friend, so any chance I had to be around him, I was,” Christie Reed said.

The couple met while working at their first jobs. “We went on one date and that was it. He had a very loving and kind heart and I just knew he was the one.”

Aged 20 when she married the man she describes as her “soulmate,” there was no doubt among Christie’s family or friends when she introduced her future husband. “They knew we were meant to be.”

To contribute to the online fundraiser, visit Youcaring.com and search for the “Reed Family Fund.” You can also call Weichert Realtors at 813-933-1761.