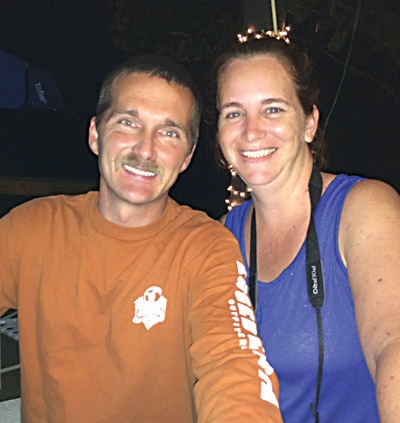 Ruskin residents Jeff and Stacy Anderson can be seen every Monday and Tuesday night at Sunset Grill in Little Harbor, running their karaoke show for loyal patrons.  But it is their day job — that of certified Wildlife Chasers — that pays the bills and puts food on their table.

Aptly named Bacon Chasin’, their wildlife removal company has been the family’s mainstay for many years, and is licensed by Florida Fish and Wildlife. Their job primarily entails the removal of feral hogs that present a hazard to local farmers, residents and businesses. Bacon Chasin’ is also called in to remove racoons, opossums, armadillos and even dangerous bobcats. “It’s not a job for just anyone,” says Jeff, citing some of the large, ferocious animals they deal with on a daily basis.  “It’s not just something you watch on TV and decide to do. For instance, today we captured a 400-pound feral hog with three-inch tusks, and he was mean.”

The Andersons are members of the NWCOA, or National Wildlife Control Officers Association, and hold a transport and dealer card for feral swine by the State Licensing Board of Florida.  The Andersons estimate that a single feral hog can destroy up to one acre of property per night, which explains why their removal service is of such value to local farmers and businesses. 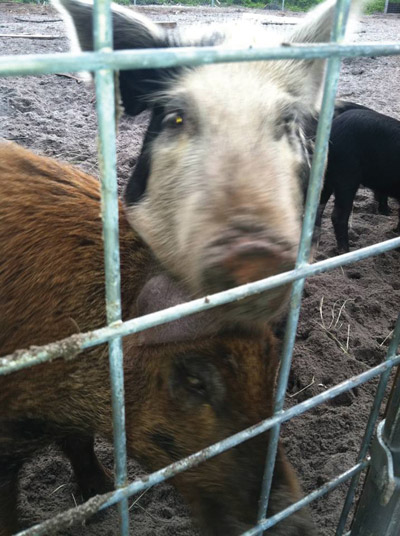 Feral hogs are very destructive and cause problems throughout Florida and the Southeast. The trapped hogs are penned on the Andersons’ property.

One of Bacon Chasin’’s largest clients is the Sarasota-Bradenton International Airport on U.S. 41 in Sarasota, where hogs and armadillos pose a hazard to the grass runway so critical to the safety of private planes that land there.  A single feral hog can produce a new litter of babies every three months, making it all the more necessary to keep the population under control.  Left unchecked, these animals also destroy valuable crops for area farmers who rely on fruits and vegetables for their living.

When asked what happens to the animals they capture, the Andersons said that smaller animals, such as racoons and opossums, get released into safe environments on private property where they can thrive without threatening human pursuits.

Others, like the large feral hogs, are kept on their affiliate property in Ruskin, off U.S. 41, which has the facility to hold them until they can be transported for other uses. Last week, the Andersons captured a large “Trophy Hog,” which was transported to an outfitter in northern Florida to be released on thousands of acres of land and hunted by “Trophy Hunters.” Other treacherous animals that are ultimately destroyed are confiscated by the University of Florida for medical study.

“Being a hunter and a trapper is my livelihood,” says Jeff.  “I’ve been doing it ever since I can remember.” He said that he learned all about wildlife trapping and hunting as a child, growing up in a family of hunters. Using his John Deere Gator UTV 4-seater, he has similarly made hog-hunting into a family affair.  “Our children love going along on hunts,” says Stacy, whose three daughters, aged 4, 13, and 19, have become active in the family business. “The girls especially love trapping the little piglets,” she said, describing how often these piglets end up being raised in the family home, “being bottle-fed and bathed in our family bathtub.” 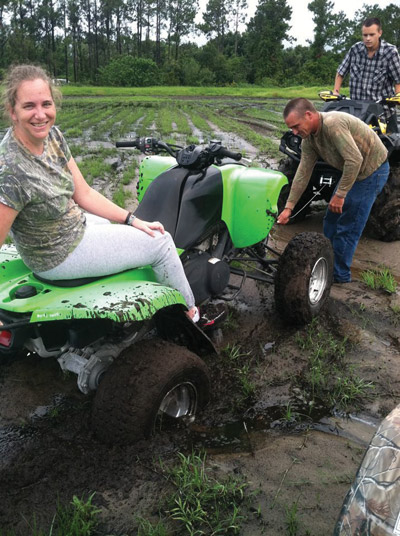 There are certainly advantages to having the family involved in the business, says Stacy. “We’re always together as a family.  Most people don’t get that.”

Adds Jeff: “We don’t have to deal with bosses because we are each other’s bosses.”

Asked when they find time to run their Digitrex-certified Karaoke Jockey business, the couple says they have extended that to be a family endeavor as well.  “We have a musical family,” said Jeff, who has invested $20,000 into equipment for the sideline karaoke business. “We play at family-oriented venues,” such as parties, weddings and at the Sunset Grill at Little Harbor and Terra Ceia. “If I can’t bring my kids, it’s not a venue we’re interested in playing,” he said.

As if they aren’t busy enough, the Andersons also donate their time and equipment to a variety of community events, such as holiday parties at the VA Hospital, several veterans events and the Hillsborough County Animal Control “Adopt a Pet” drive.

“Anything that benefits children, animals, or men and women in uniform, I’m on board,” said Jeff.