SCC Parade was a celebration of Christmas and sunshine 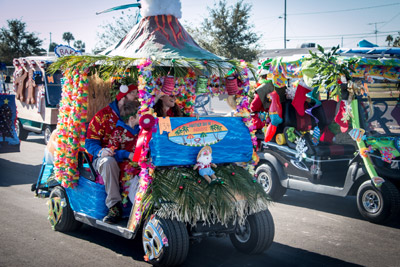 Chase Kendall won top honors and an $800 prize in the individual category for his volcano cart.

It was a celebration on Saturday in Sun City Center. Certainly a celebration of the joy and good will found in the Christmas season but there appeared more to it; the Sun City Center Golf Cart Parade had a distinctive tropical feel to it. Considering a fair number of residents of the community hail from more northern climes, part of the celebration may well have been that there was no snow to shovel, no ice to slip on and no seriously cold weather to endure.

Or, perhaps, it also had something to do with the official theme of this year’s parade: Holiday Fun in the Sun.

The parade of golf carts, many elaborately decorated, took off under a sunny blue Florida sky with cool temperatures for the area but not so cold in comparison with much of the nation. No one was shivering, and everyone, from young to old, biped to quadruped, and even a feathered friend or two, seemed to have a great deal of fun.

“Although the quantity of carts was down from last year, the creativity and craftsmanship has never been better,” said parade organizer Dave Birkett. “Once again we appreciate Minto Community’s sponsorship, and everyone seemed to be having a fun time at both the parade activities and the Winterfest that followed.”

The decorated carts were vying for a share of $6,000 in awards, donated by Minto Communities, which were given out in three main categories. In the business category, the Sun City Center Chamber of Commerce took home top honors and $300 for their Bad Santa Kop Car; in the group category, consisting of community organizations, the winner, collecting $800, was the Irish Connection with an actual working merry-go-round; and among the individual winners, Chase Kendall took home $800 for his volcano cart described as “another day in paradise.”

The grand marshal for the event was scheduled to be Reginald Roundtree, WTSP Channel 10 news anchor, but a last-minute change turned that honor over to Major Ronald Hartley, commander of Hillsborough County Sheriff’s Office District IV. 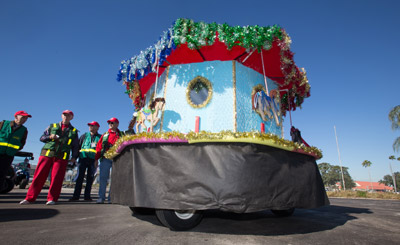 The winner in the group category, taking home $800 in prize money, was a working merry-go-round from the Irish Connection.

The Winterfest event that followed, held in the plaza near the Rollins Theater, included live music, food and beverages, area business and organization booths and other events.