A shot at the $1 million spot! Local man shoots for Super Bowl commercial 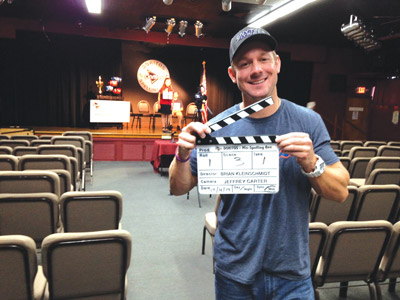 Brian Kleinschmidt said they taped for eight hours to get the 30-second commercial to enter in the Doritos “Crash the Super Bowl” contest. Of the 4,900 entrants, Kleinschmidt, of Riverview, is in the final 29 now being graded by viewers online.

Brian Kleinschmidt of Riverview has produced a Doritos commercial that may be one of the company’s two paid spots that will be shown at Super Bowl XLIX on Feb. 1, 2015.

It all depends on how many votes his commercial gets between now and the end of January.

Kleinschmidt, 32, studied mass communications with a focus on television and radio at the University of Central Florida after graduating from Riverview High School, but then he went into the fitness business.

He and his fiancée, Mika McGee, who is a fitness trainer, own three Anytime Fitness centers; one near Riverview High School, one near Winthrop Plaza on Bloomingdale Avenue, and the third on Brandon Boulevard.

Although he’s involved in Brandon’s and South County’s business communities, he’s never lost his love of video, or the theater.

One of 4,900 people from seven countries who entered PepsiCo’s Doritos “Crash the Super Bowl” contest, he is now one of 29 finalists gathering votes on line in hopes of winning $1 million and a chance to work at Universal Pictures in Hollywood, lending his creative talent to new movie  releases.

He said it took more than eight hours of taping — plus the video editing time— to get the 30-second video exactly as he wanted it.

“It’s up to the public now,” Kleinschmidt said in an interview Dec. 8. “Whichever commercial gets the most fan votes will win the prize.”

According to PepsiCo, the 29 finalists are located in the United States, United Kingdom, Australia, Germany and Egypt.

People may visit crashthesuperbowl.doritos.com/gallery/submission/1397?share=true and vote for the commercial, and are encouraged to share the link with their friends.

“They’re going to show the two commercials that get the most votes during the Super Bowl, and people watching will vote for the winner,” said Kleinschmidt. “But they [the winner] won’t be notified until the next day.”

He said he is honored just to be among the finalists when so many entered, but it wasn’t as though it was a simple task.

“It was a real family affair,” he said. “My mom and dad and I were sitting on their back porch having dinner, brainstorming ideas. When I hit on the idea for the one I made, they both cracked up. Then we were all laughing. I knew right away it was the right one.”

His mother, Ellen Kleinschmidt, has taught music privately and with the school system for many years, and is well-known in the South County arts community. One of her students, Alex Council, and Kara Chung, a friend of Alex, act in the commercial, along with Brian’s dad, Kevin. Both Kara and Alex are studying performing arts at Blake High School, a magnet school for the arts in Tampa.

The idea of students deliberately losing a spelling bee to win the “second-place prize” — bags of Doritos — was written and directed by Kleinschmidt and put to video by Brandon videographer Jeff Carter.

People have until the end of January to view the video, but Kleinschmidt says he hopes they will do it now so it won’t slip their minds.

“I don’t know what I’d do with a million dollars,” he said. “I’d probably be tempted to give a lot of it away.”

Having recently played the role of Tarzan in a play performed by the Manatee Players, of which he is an active member, Kleinschmidt said it could have a lot to do with the arts.