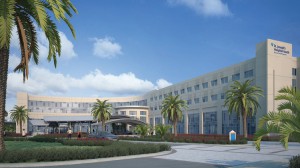 St. Joseph’s Hospital South is preparing to host a community event Jan. 17 to show South County what it will have to offer when it opens next February.

BayCare Health System is spending $237 million on the 72-acre site for the hospital being built as an extension of St. Joseph’s in Tampa. The hospital in Tampa opened in 1934.

The hospital’s South branch is at 6901 Simmons Loop in Riverview. Construction of an entrance road has been completed,  with its main drive just west of the BayCare Family Care center and diagnostic laboratory that opened in July of  this year on Big Bend Road.

The Tampa St. Joseph’s was founded by the Franciscan Sisters of Allegany, N.Y., who brought their medical ministry to Florida in 1934.

For more than 80 years, St. Joseph’s has relied on philanthropic gifts as its main source of funds, and it may be supported by calling 813-872-09079 or visiting www.SJHFoundation.org.

The new hospital promises a 90-bed, full-service medical program and acute care that not only has cutting-edge advanced technology in all its fields but also features high-efficiency systems that reduce energy consumption.

Building materials with recycled content are being used; materials and furnishings that minimize toxic chemical emissions, and reduce water use while improving air quality, she said.

Besides St. Joseph’s, the BayCare group also owns and runs the well-known Mease Countryside Hospital in Safety Harbor; Mease in Dunedin; Morton Plant Hospital in Clearwater; and St. Anthony’s Hospital in St. Petersburg, among others.

Patients will have the benefit of fully digital systems connected to electronic medical records, which will give them fast access to their test results, radiologic images and transcribed reports.

According to a press release introducing Michael Hance, who will be director of operations at St. Joseph’s South, BayCare promises the most advanced technology, including “a completely reinvented clinical platform for cardiac care for patients in need of the most sophisticated diagnostic and acute care.”

The outpatient center, now open since July, has a full-service laboratory and imaging services on site, including MRI, CT, digital mammography and bone density. This 85,000-square-foot medical office building is part of the land that was purchased for a hospital in the mid-1980s, but no building on the site began until 2012.

Dr. Fredrick Taylor, D.O., who has been a longtime physician in Apollo Beach, has moved his staff to BayCare outpatient services and is in charge of the outpatient facility.

The medical group states that it will have experts in 18 different fields, a list of which is available at www.sjbhealth.org/homepage.cfm?id=584, along with many other details about St. Joseph’s past, present and future.

As of Tuesday, Nov. 25, the name of the Chief of Staff for the hospital had not yet been released.