Home News On Thanksgiving: one nation, one voice
News 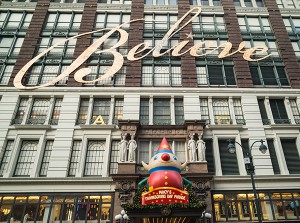 The Macy’s flagship store on 34th Street in Manhattan is gearing up for the 88th annual Macy’s Thanksgiving Day Parade. It is expected that more than three million people will attend and millions more will watch on television. The parade has been nationally broadcast for 62 years. Mitch Traphagen Photo

Much has changed in the four centuries since what we accept as Thanksgiving began, but the tradition remains.

There were no 24-hour supermarkets. There were no web cams to share moments with far-flung family and friends. There almost certainly wasn’t enough sugar or other staples to make things like cranberry sauce or pumpkin pie. There may not even have been turkey. And even if turkey was on the menu, they certainly weren’t the Butterball turkeys that we know of today. And, no, any birds that came back from the “fowling mission” ordered by Governor William Bradford to help supply the three-day feast, didn’t have the nifty little pop-up timer. But then again, the ovens, such as they were, didn’t have timers, either.

For that matter, what is commonly considered the first Thanksgiving, a three-day feast in the late autumn of 1621 in Plymouth Plantation, which included at least 90 Native Americans and 50 or so Pilgrims, may well not have been the first Thanksgiving at all. Although Massachusetts holds the historical title, other states, including Florida, have reason to lay claim to the founding of what has become one of America’s most cherished and deeply loved holidays. After all, pretty much everyone who survived the trip across the Atlantic and made it off the boat alive practiced rituals of Thanksgiving — giving thanks. That happened in Florida long before 1621.

But back in Plymouth Plantation, only half of the original Pilgrims survived to attend the three-day celebration of Thanksgiving. No one knows exactly when it was held, but the consensus is that it was sometime between late September and mid-November in 1621. According to what records do exist, four adult Pilgrim women cooked the feast for the 140 to 150 guests.

As written by the chronicler of the time, Edward Winslow, the four men sent on the fowling mission killed as much fowl in one day to serve the normal needs of the settlement for a week.

So there was fowl, likely including turkey, there would have been corn porridge and other vegetables from the successful harvest. Seafood was a near certainty to be on the menu.

Governor William Bradford said, “They began now to gather in the small harvest they had, and to fit up their houses and dwellings against winter, being all well recovered in health and strength and had all things in good plenty. All the summer there was no want. And besides waterfowl there was great store of wild turkeys, of which they took many, besides venison, etc. Besides, they had about a peck a meal a week to a person, or now since harvest, Indian corn to the proportion. Which made many afterwards write so largely of their plenty here to their friends in England, which were not feigned but true reports.”

In New York City, the barricades are going up to help contain the three million or more people expected to attend the 88th annual Macy’s Thanksgiving Day Parade. It begins at 9 a.m. on Central Park West in Manhattan and winds through the city past the Macy’s flagship store on 34th Street and then down 6th Avenue, also known as the Avenue of Americas. Even for a city accustomed to large events, hosting the parade is not a simple task. Known for spectacularly large balloon characters, any obstructions, such as hundreds of traffic lights, need to be moved or removed.

Around the nation, millions more will watch it on television. The parade, which began in 1924, has been broadcast on NBC for 62 years.

Three hundred and ninety-three years after that Thanksgiving celebration in Plymouth, it is likely many will send back reports to friends and family via email, text messages, Facebook posts and tweets, written largely of the city of plenty, in a nation of plenty. Still, after nearly four centuries, the reports will be not feigned, but true. 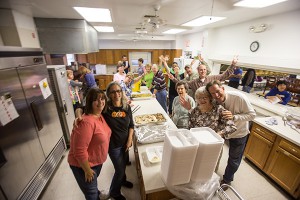 Thanksgiving Day volunteers at the United Methodist Church of Ruskin were among the many at area churches helping to make Thanksgiving special for those in need of either dinner or simply companionship. Beanie’s Sports Bar and Grill provided 900 meals. Mitch Traphagen file photo

From that feast of giving thanks in 1621, Thanksgiving, while always supported for celebration, would not be an annual agreed-upon holiday for centuries to come. During the Revolutionary War, the Continental Congress created one, sometimes more, days of thanksgiving each year. In 1777, from a government largely in exile with the British occupying the American capitol of Philadelphia, Samuel Adams penned what would become the first National Proclamation of Thanksgiving:

It is therefore recommended to the legislative or executive Powers of these United States to set apart Thursday, the eighteenth of December next, for Solemn Thanksgiving and Praise: That at one Time, with one Voice, the good People may express the grateful Feelings of their Hearts, and consecrate themselves to the Service of their Divine Benefactor…

Twelve years later, in the first U.S. House of Representatives, Congressman Elias Boudinot from New Jersey proposed that President George Washington proclaim a day of thanksgiving, “offering an opportunity for all the citizens of the United States of joining, with one voice, in returning to Almighty God, their sincere thanks for the many blessings he had poured down upon them.”

On October 3, 1789, President Washington signed the first fully American proclamation of Thanksgiving. In 1795, he signed the second.

Just as they did as colonies, the newly independent states largely celebrated a day of thanksgiving as best suited them for the next several decades.

Seventy-four years to the very day of President Washington’s first Thanksgiving proclamation, President Abraham Lincoln declared a day of thanksgiving as “the last Thursday of November next,” signing it on October 3, 1863.

Since then, Thanksgiving has been observed each year without fail. In 1939, President Franklin D. Roosevelt made the first modification to the tradition: that year November had five Thursdays, and thus the day was changed to the “next to last Thursday.” The next year, the president declared it to be the third Thursday. It didn’t necessarily go over well with the opposition party or the public, despite the hope that merchants would appreciate the lengthening of what had already become defined as the shopping season before Christmas.

By 1941, however, Congress resolved that Thanksgiving would be held on the fourth Thursday of November. 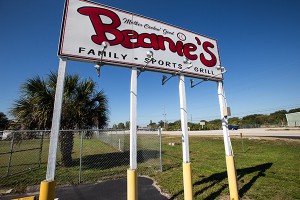 When it comes to their hard work at making Thanksgiving a true day of thanks, Beanie’s is publicity shy. They do it only to help. Last year they provided 900 meals. Mitch Traphagen Photo

Millions of people will see an enormous SpongeBob SquarePants, among dozens of other elaborate balloons, float among the pure objectification of plenty — the gleaming towers of Manhattan on Thursday; millions more will sit down to their own feasts of plenty, joining with family and neighbors for a day of Thanksgiving, an American tradition of four centuries.

This is a nation of plenty the Pilgrims and early Native Americans could not possibly have imagined. While some of the faithful may well consider President Lincoln’s words, “[These] are the gracious gifts of the Most High God, who, while dealing with us in anger for our sins, hath nevertheless remembered mercy,” it remains a day of acknowledging that mercy rather than focusing on the sins.

On one day in one nation, a nation of plenty, with one Voice: Happy Thanksgiving.