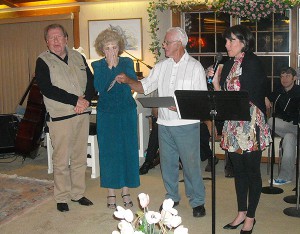 Bob Tiberio, second from right, owner of the former Thunderbird Lanes bowling alley and restaurant in Ruskin, celebrated his 85th birthday with a party that was filled with surprises as he donated large sums to charities. Here Bobby and Sherry Burnette, founders of Love a Child Inc., react to the generous donation given to the organization. At right is Jill Kelly of Wells Fargo Advisors. Milton Brown Photo

The sign outside by the circular drive said, “Birthday Party Here,” but the event was far more than a birthday party. At least 60 people came to pay tribute to Bob Tiberio as he turned 85 on Nov. 22.

Tiberio, with his late wife Lucille, was longtime owner of the former Thunderbird Lanes bowling alley and restaurant in Ruskin. They were members of the First Baptist Church on College Avenue near their home.

The church provided music and song led by the Rev. Jim Farr, its music and drama leader, helped by its trombone-playing Senior Pastor, Dr. Barry Rumsey.

Hosted by Jan Liles, Linda Tate and Michelle and Maria Brown, friends came and went all afternoon, bringing food and gifts but mostly love and gratitude for things past, present and promised for the future.

You see, this birthday party wasn’t about celebrating Bob Tiberio’s 85 years as much as it was a thanksgiving for a life well lived; a life much appreciated by the many to whom his consistent charity has helped throughout his life.

This day was about Bob’s love of missions and missionaries.

It all started when he and his cousin Julia Yost and their friend Becky Ott graduated from high school together in 1947 and all went into mission work.

Yost stayed in the Philippines 25 years; Ott in Nairobi, Kenya, for 30 years; and a third friend, Cecil Himes, is currently in Johannesburg, South Africa.

Although Tiberio did not leave the states to do mission work, he moved to Ruskin went into business, and stayed in contact with missionaries and donated to missions most of his life.

During the Nov. 22 party, Tiberio donated $75,000 to Love a Child ministry in Haiti — and then pledged to donate a similar amount every year until it reaches a million dollars.

Alerted that this gift would be given, Bobby and Sherry Burnette, founders of Love a Child, and Rod Hazelip and Sandra Smith, former directors of the ministry, were on hand to receive it. At times, Sherry Burnette sat with her eyes closed and her hands folded in her lap, listening to the music and prayers, looking as if one man’s generosity was almost impossible to believe.

So why did this man choose to donate to a ministry as a birthday gift to himself?

“Bob has a heart of gold,” said Jill Kelly, who has been Tiberio’s financial advisor since 1984. The certified financial planner and vice president of investments for Wells Fargo Advisors said that Tiberio has given to charities for as long as she has known him. “He’d give away everything he had, if possible. He thinks of everyone before himself,” she said.

“It’s a hand-up, not out,” Sherry Burnette said.

According to the website www.loveachild.com, the ministry feeds more than 7,000 children a day in Haiti, one of the poorest countries in the world. Founded 40 years ago, the charity now has 25 employees in Fort Myers and 450 in Haiti. It is always looking for donors and people to “financially adopt” a child through its website.

The gift to Love a Child given, and thanks received, more surprises were revealed as the afternoon passed and Tiberio donated $25,000 to the First Baptist Church. A telephone call to the church office the following day revealed his gift would be used toward the fund to renovate the sanctuary in the church founded 78 years ago.

Then donations to missions supported by Yost, Ott and Himes were presented as well, although no specific amounts were publicly announced.

There may have been an orange-and-brown décor with a turkey on one of the tables and other Thanksgiving decorations spread around, but the party’s theme was “Missionary Mingle to Music and More” — the “More” extending from the heart of a generous Ruskin man, Bob Tiberio, to help the poor.

What better way to celebrate life, and Thanksgiving — than giving thanks in a tangible way?