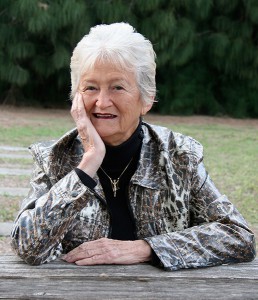 Mavis Johnson wears a tiny gold trapeze artist on a chain around her neck, reminiscent of her years with the circus. Lisa Stark, Stark Images Photography

Mavis Johnson is a regular on the local Ruskin scene, where she works as a kitchen aide at the Moose Lodge on Shell Point Road every Friday night.  She can also be seen many evenings in the local clubs and VFW, boogying on the dance floor and chatting with local residents.

So it comes as no surprise that this vivacious 83-year-old grandmother of 10 has a colorful past as a trapeze artist with the Ringling Bros. and Barnum & Bailey circus.

“Dancing and staying active keeps me going,” said Mavis, who divides her time between caring for grandchildren, donating her time to the Moose Lodge, and getting involved in community activities that benefit local charities.  Her current project is performing in the Christmas variety show to be held at the Moose Lodge on Saturday, Dec. 13. “I’ll be dancing a country line dance and also be part of the Andrews Sisters act,” said Mavis.

A 45-year resident of Gibsonton, Mavis smiles modestly when you bring up her fascinating career with the circus, where she performed from 1954 to 1969 in trapeze, balancing, and magic acts alongside husband  Richard.  Mavis continued to work for the circus for many years afterward, even getting her three children involved in the act.

Today she loves taking her grandchildren to the circus, while her daughter, Lisa, carries on the family tradition with a Christmas tree decorated entirely in circus-themed ornaments. Mavis enjoys the elaborate jeweled costumes of the modern-day circus but sometimes misses the simplicity of the homemade costumes she used to sew for herself and her family.

Dancing, especially country line-dancing, is one of her favorite pastimes,  She names George Strait, Luke Bryan and Darius Rucker as her favorite country artists.  “One of the biggest thrills of my life was meeting George Strait,” she said, giggling and proudly showing off a photo of herself with the country star, taken backstage in the late ’50s.

Mavis wears a tiny gold trapeze artist on a chain around her neck, reminiscent of her years with the circus. She credits her past for giving her the drive and inspiration to stay young at heart. “The secret of staying young is to always be doing something, not sitting at home watching TV,” she said.