Reader on the roof 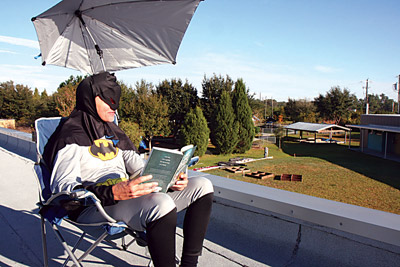 “I like to take my time when I read,” said Mark Haggett, anticipating a day free of his normal responsibilities as director of the charter schools. The students had other ideas.
Carol MacAlister photos.

Batman, aka Mark Haggett, director of the Academies of RCMA charter schools in Wimauma, spent all day last Thursday on the roof in hopes of winning 101 books for his school, the coveted prize in Pizza Hut’s Principal Challenge, part of National Young Readers Week.

All principals who complete the challenge can tweet or post a snapshot of their day and enter for a chance to win 101 copies of Jeff Kinney’s ninth book, The Diary of a Wimpy Kid: The Long Haul, for their school.

“I tell my students they’re all superheroes, so I thought I’d dress as one,” said Haggett, explaining his choice of costume for roof-sitting. He was comfortably ensconced in an umbrella-shaded beach chair — sunscreen, cooler, additional books and a loaded Kindle by his side.

Batman started the day reading The One and Only Ivan, about a captive gorilla. Among the other books on his agenda were Middle School: The Worst Years of My Life by James Patterson (yes, that James Patterson), Timothy Tolliver and the Bully Basher by Aaron Shepard, and The 7 Habits of Highly Effective Teens by Sean Covey.

Haggett was looking forward to the day of uninterrupted reading, a change from his normally busy schedule running two A-rated schools dedicated to low-income families in the farming community.

“Can you fly?” yelled a middle-schooler from down in the school’s courtyard. 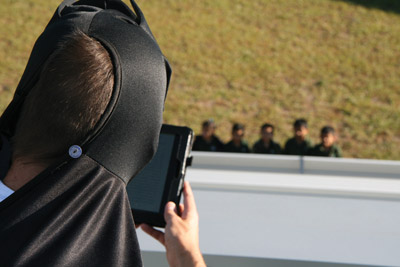 Perhaps not, but Haggett could read to the students … and he did, regaling a group of younger students with a version of Jack and the Beanstalk.

National Young Readers Week is an annual event co-founded in 1989 by Pizza Hut® and the Center for the Book in the Library of Congress. Five years earlier Pizza Hut had created BOOK IT!, a program that motivates children to read by rewarding their accomplishments with praise, recognition and pizza. According to the Pizza Hut website, BOOK IT! “currently reaches over 14 million students in 38,000 elementary schools annually.”

Haggett plans to take the Accelerated Reader program test on each of the books he reads during his roof day. “My goal is to get 100 percent as a good example to my students.”

Haggett joined the school as a teacher in 2000; this is his third year as principal. 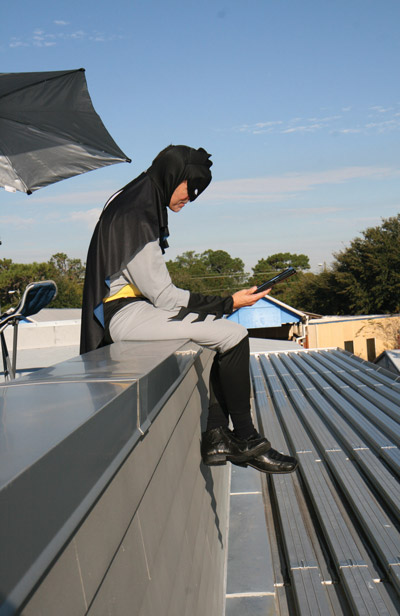 Observations: Capturing the beautiful you