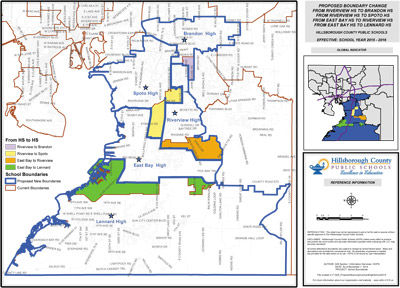 Serious overcrowding at East Bay and other high schools have caused the Hillsborough County School Board to plan a vote on attendance boundary changes early in 2015. A definite date for that vote has not been set.

The projected increase in school population is so sharp that it will impact not only other high schools but many middle schools as well. And there are three important informational meetings scheduled in December when parents and others may voice their opinions.

A third meeting on Friday, Dec. 12, at the Florida State Fairgrounds from 3 to 7:30 p.m. will be for discussion of “Choice” options available online.

Currently, East Bay High has a capacity of 2,017 students  but actually has 2,332, and according to new homes platted by developers, the county’s school district expects approximately 500 new students to enroll there in the next five years.

“We can only go on what is platted,” said Lorraine Duffy, the school system’s general manager for growth management. “Based on what we know now, Riverview [high school] is expecting more than 480 new students in the next few years as well.”

Riverview’s capacity is 2,566 and its enrollment is 2,385. But the 480 new students expected will soon throw classroom attendance over its capacity.

“The Waterset development [being built along Big Bend Road] will bring in many,” Duffy said. But it is impossible to know just how many until the homes are sold.

Meanwhile, the relatively new Earl J. Lennard High School at 2342 E. Shell Point Road, Ruskin, is undergoing an addition of 20 classrooms that will enable it to add more students, including some new students from Riverview and East Bay high schools under the proposed new attendance boundaries.

Right now, Lennard is also listed as overcrowded with a capacity of 1,967 students and an enrollment of 1,981, and the county has projected by new-home platting an additional 360 students there in the next few years. Lennard’s new classrooms, however, will add 475 to its capacity.

“It is very hard to keep up with the tremendous growth in the area and we must go by platting for our projections,” Duffy said. “We don’t just use a count from when a developer changes zoning.”

The attendance boundaries of Spoto and Brandon high schools will also be affected in trying to balance enrollment among the schools, said school district spokesman Steven Hegarty in a press release dated Nov. 16.

The two meetings scheduled Dec. 8 in Riverview and Dec. 11 at East Bay High will be informal question-and-answer sessions with no formal presentation. People may arrive at any convenient time, and staff members from school transportation and school choice at all the affected schools will be present to answer specific questions. Maps of the proposed changes also will be posted for review.

The Hillsborough School District will also make information available for students at Eisenhower, Dowdell, McLane, Giunta, Barrington and Rodgers middle schools, where 8th graders will be impacted by the changes.

South County has seen many new elementary and middle schools go up in the last 10 years as the area has continued to grow.

There will be yet another elementary school opening in August: the Dr. Jack R. Lamb Elementary School, located close to the Progress Village Middle School in the Magnolia Park/Progress Village communities just west of U.S. 301 at the Bloomingdale Avenue/Progress Road intersection.

To submit questions about boundaries, or to make comments before the public meetings, email boundaries@sdhc.k12.fl.us.

Those who would rather receive a telephone call may leave their name and telephone number at 813-272-4608.

Reader on the roof

Losing senses: How ‘Dining in the Dark’ opened my eyes to blindness