Home News Losing senses: How ‘Dining in the Dark’ opened my eyes to blindness
News

Losing senses: How ‘Dining in the Dark’ opened my eyes to blindness 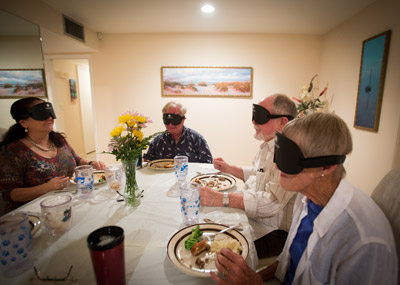 Dining in the Dark, with hosts Nancy and George Cottrell, along with friends Susan Taylor and Beth and Joe Glenn, was in parts difficult, frightening, enjoyable and delicious. It was an evening with caring people and an experience that opened my eyes to blindness. Mitch Traphagen photos.

Dinner was delicious — but I never saw it. I was told what was on the plate, I was told that the broccoli was in the three o’clock position, the meatloaf was at six o’clock and so on, but I really didn’t know what it was and the face of the clock soon jumbled together into meaninglessness. Except for the dinner roll at twelve o’clock.

When sighted people cover their eyes or find themselves in a dark place, this is something that’s very terrifying for us. And so in general, we assume that this is what blindness means. But of course, it isn’t. For people who were born blind or who go blind at a very young age, that’s not at all what blindness means.

– Rosemary Mahoney, author of the book For the Benefit of Those Who See: Dispatches From the World of the Blind.

My dinner was a learning experience, certainly, along with an opportunity to meet people committed to making life better for those with a disability. It was called, “Dining in the Dark,” and we were asked to dine together wearing black masks, enjoying a full meal that none of us could see.

It wasn’t easy. And for me, Rosemary Mahoney was partially correct in her quote — there was an element of terror. I am profoundly hearing-impaired, and losing my vision as well was something to dread.

Nancy and George Cottrell of Sun City Center were the hosts of the dinner. They are volunteers with Southeastern Guide Dogs, and while neither is visually impaired, they do have personal experience with it. Their passion and empathy were obvious and translated to my difficulty in hearing as well. The Cottrells knew there was something to be gained in learning about the challenges faced by others. It is a challenge that, frankly, any of us could face at anytime. There but for the grace of God, go I.

But when the world went black, my hearing began to fail as well. According to Nancy, despite what some consider conventional wisdom, she knew of no one who was visually impaired who was magically granted an increase in hearing acumen in partial compensation for the loss of vision. I certainly wasn’t. The tiny microphones on my hearing aids aren’t directional, so, once in the dark, when I, too, was visually impaired, voices came from everywhere and nowhere. The clock face of my meal disappeared into the darkness I was experiencing. Reluctantly I stuck my fingers into the food on my plate and began what so many take for granted but so few can appreciate — that a simple, necessary, supposedly even enjoyable task could possibly be so daunting.

Think about it for a moment: Imagine yourself visually impaired with friends who are sighted. Would you order what you may want? Mashed potatoes and gravy? Broccoli, spaghetti? Would you take the risk that a dinner roll, served by a sighted waiter, may not be available to be your friend? Even the hardiest self-esteem could suffer from a simple meal, something so commonplace, so central to our human connections. No, you’d likely order a very ordinary sandwich, forgoing what you may really want.

Although the dinner roll did indeed help, it didn’t take long for me to lose track, and much of what I was able to pick up using fork, when I picked up anything at all, soon became a surprise. Would it be meatloaf? Sometimes but often not. The last bite, a tender piece of steamed broccoli, was a complete surprise. I was certain I had already finished my broccoli. 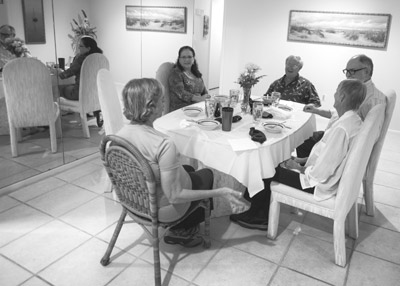 After dinner, we had the advantage of returning to the world of the sighted. But sighted or not, the humanity, compassion and human connection never changed.

For an hour before dinner, all six of us, Nancy and George, Susan Taylor, Beth and Joe Glenn and I enjoyed a free-flowing conversation ranging from guide dogs, even to hearing ear dogs, along with random observations about life in South Hillsborough. The company was charming and laughter came easy. All of us sighted, about to be temporarily blinded.

I cheated a little. As we sat at the table with masks in hand, before dinner was served (we were not allowed to see the actual dinner), I tried to memorize the exact location of my already-placed water glass. I reached for it, touched it. I tried to remember.

Conversation at dinner was a different matter — it occurred more in fits and starts in our blindness as we all had to concentrate more on the simple act of eating. It wasn’t easy. At one point I decided to attempt to reach for my glass of water but my bearings had been lost, the cheating had been for naught. I decided a warning was in order, so, in one of the moments of silence, I called out that I was going to reach for my water glass now and if anyone felt anything wet as a result, that would be why. There was a short pause of silence as my dinner companions considered that, followed by laughter. It was by no means the only laughter over dinner.

We could afford to laugh, of course. We were able to remove our blindfolds and return to the world of the sighted. We were able to see what we had wrought with dinner, something I had previously only taken for granted. I was surprised to see that while my plate was relatively clean, my fingers and napkin were less so. Some may not be comfortable with resorting to such a solution but I had no choice. I suspect many others who are visually impaired have no choice, either.

Dining in the Dark was much more than a learning experience. And although it was a highly enjoyable evening with wonderful hosts and friends, it was far more than that as well. It opened my eyes, allowing me to see that sight, while not to be taken for granted, isn’t among the definers of humanity or what makes us human. Understanding, empathy, even laughter and simple communion are things that make us human, none of that involves sight. The author Rosemary Mahoney was right — while blindness may no doubt be terrifying at times, that is not at all what blindness is. Blindness is simply another trait of humanity.

Dessert was served fully sighted. Beth then went on to tell a story of a woman who had lost her sight and continued to golf. She said she was and remained a spectacular golfer. More stories came out, there was more laughter. It was a delightful evening, despite that some of it was never seen, and one coupled with moments of discomfort. It was felt, both literally (in my case, at least) but mostly figuratively. Sighted or not, deaf or not, we are largely who we choose to be, and we are all in this together.

Nancy and George Cottrell, along with their friends at dinner are all volunteers with Southeastern Guide Dogs. They are also involved with helping to raise puppies to grow up to be life-changing guide dogs. For information about SouthShore Puppy Raisers, visit www.southshorepuppyraisers.blogspot.com.