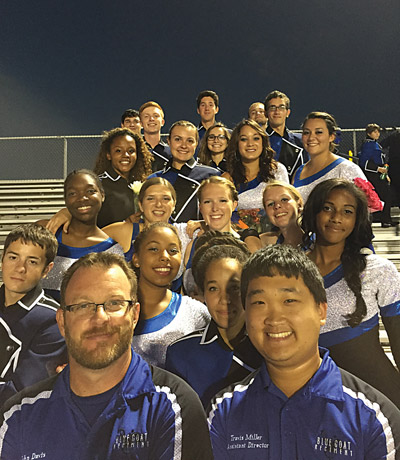 A team of mostly freshmen and sophomores making it to the high school football playoffs?

Suggest that at the start of football season, and you might get a few polite smiles and a couple: “Well, it’s always good to hope.” Any sane odds maker would happily take your money.

But that’s exactly what the Riverview High School Band has done this year. The band will be competing in the state finals, the band version of playoffs. The finals will take place Nov. 22 at Tropicana Field in St. Petersburg. Some 120 bands will compete in the state finals, with the competition staged across four locations in the Bay area.

“I think that will be really cool for the kids to perform in a professional stadium,” said band director John Davis, who has been teaching at Riverview for eight years and seen student interest in the activity mushroom over the last couple of years.

“We are predominantly, 75 percent or so, freshmen and sophomores, and for a group so young to qualify so high — that is a really big deal,” Davis said. So how did this group of relatively inexperienced youngsters make it to the elite level of marching band competition in Florida?

“They are just a bunch of great kids with a great attitude who have been really easy to work with,” Davis said. “Sometimes things just click with a group and that’s what happened with this one. I am very proud of them. Their parents have also been very supportive.”

A commitment to the marching band is no easy task for the young musicians. They practice twice a week for three hours at a time, Monday and Thursday nights after school.

Reed Shaw, who plays baritone horn with the band and is one of the few seniors among the group, has been playing with the Sharks since he was a freshman. This will be his first taste of postseason competition. 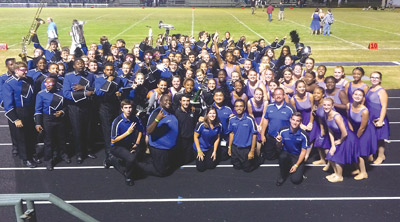 The Blue Coat Regiment after their victory at the Chamberlain Invitational on Oct. 18.

Finally getting there “is very, very cool,” Shaw said. “It’s the greatest feeling in the world.”

Once they made it, the whole band was “exuberant,” Shaw said. “We just threw up our arms and freaked out.”

“I wasn’t expecting us to place as well as we did,” said assistant band director Travis Miller. “We were going up against a band [Lakewood Ranch High School] who has been a state finalist every year for the last 10 years, so I was expecting a really close second-place finish to them.”

When the Sharks heard they had taken first place over Lakewood by two points — a substantial differential when it comes to band scoring — “I was ecstatic,” Miller said. “It’s really hard to remain professional when stuff like that happens. We have an extremely talented young bunch with us.” 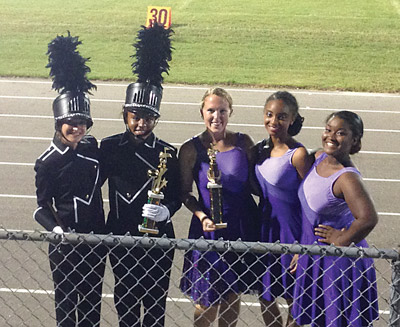