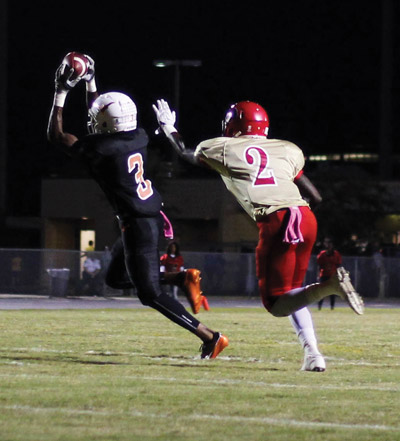 Resilient is the word of the week in the Lennard Longhorns locker room. A week after a difficult 56-0 loss to Armwood, one of the top teams in the state, it would have been easy for the young Longhorns to fade and rest on the laurels of what has already been the best season in their school’s history.

But this team, and its coaching staff, would not allow that to happen.

Instead Lennard bounced back, handing out their own blanking to Leto, 49-0.

Perhaps a mark of how far the team has come this season and the standards they have set, their coach was not entirely pleased with the team’s performance.

“I don’t want to sound like sour grapes, but we didn’t play great, but we did enough,” said coach Keith Chattin. “We started off really slow in the first quarter and just didn’t do anything a whole lot right. I think the kids were still shellshocked by what happened last week because it wasn’t until the third quarter that they realized we have to start playing football. It was good for them because they started having fun and made some plays.”

The loss to Armwood was tough to take, especially for a group of young players, Chattin said. “They are 16-, 17- and 18-year-old kids, so sometimes it takes the next Friday to put it behind you.

“Resilience is a word we have used all season,” Chattin said. “We had a hard loss against Hillsborough (a 32-26 loss) and we were resilient coming back from that one (with a 41-23 win over Robinson), and then we get beaten pretty bad last week against Armwood, but then we bounced back against Leto.”

The Longhorns are now 7-2, the best record, by far, in school history.

“That’s something for the kids to be proud of,” said Chattin. 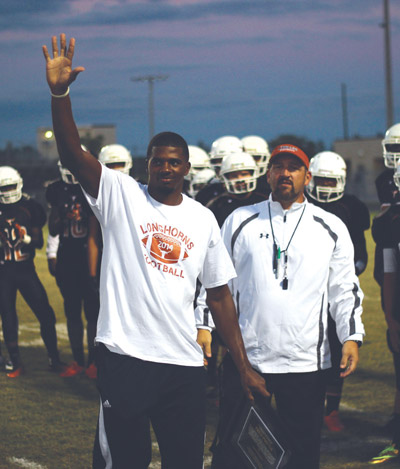 Fred Porter, above left, was honored at the Lennard-Leto game last Friday. He is the first Lennard High School graduate to play for a Division 1 college. Porter is a wide receiver at Florida International University in Miami. He played youth football for the Progress Village Panthers and the East Bay Buccaneers.

Out of the playoffs

With Hillsborough holding the tie-breaking win over Lennard, the playoffs are now beyond the Longhorns.

Lennard’s last game of the season will be Spoto at home.

“I still think we are a playoff-caliber football team, but the way that things are decided we will be sitting at home for the playoffs,” Chattin said.

Perhaps once they can sit at home and let their record-breaking season sink in, the players will realize what a remarkable turnaround they have had this season.

“It’s remarkable for the kids and I give them all the credit,” said Chattin. “They have worked and really shown that they want to buy into the process. We have come a long way from 0-10 [in 2012] to 1-9 [in 2013] to the possibility of being 8-2. Now we have set the foundation for the program. We are going to be alright going forward.”

The end of the season may be in sight for the Longhorns but their achievements may still be recognized at post-season award ceremonies. Stay tuned.

Riverview went down 35-28 against Alonso.

“We also didn’t take advantage of being inside the red zone. We just didn’t play efficiently on offense early in the game. I knew, even being up 14-10 at halftime, that we would be looking back on that first quarter and wishing we had played better because by the fourth quarter it was obvious we needed [to capitalize on] those chances early in the game.”

On the positive side, the coach said, the Sharks played well on defense at times and got after Alonso’s quarterback pretty well. “But when we couldn’t pressure him, he picked us apart,” Thornton said. “We were winning at halftime but we didn’t seal the deal.”

Next up for the Sharks is a game against rival Newsome.

“Newsome being right down the road is a natural rival for us and [a game] I would expect us to play well in. They are a quality football team, but if we play at a high level it could be real competitive.”

East Bay, who had their playoff destiny in their hands, suffered a tight 28-17 loss to Brandon. 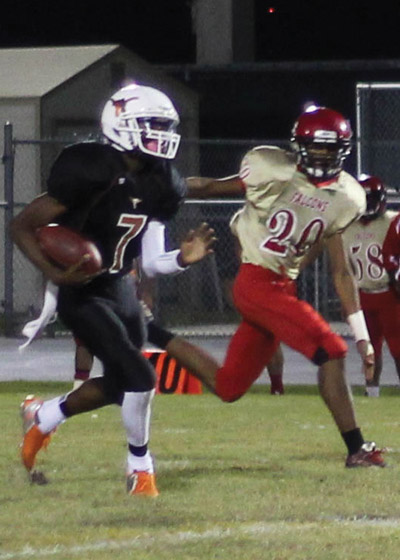