Heroic deed honored. Man who saved couple’s lives says “Anybody would have done it” 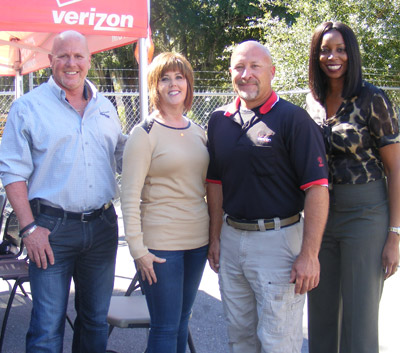 Verizon officials honored local fiber optic technician Troy Hamrick, a veteran of 16 years with the company, who recently came to the aid of Lois and Ed Guerin of Kings Point in Sun City Center before they were taken to Tampa General Hospital by ambulance. Hamrick’s quick thinking had him devise a tourniquet out of available materials in his truck. On Oct 27, Verizon officials (from left) Bill Guess, local manager; Jeanmarie Milla, Florida regional president over a 6,000-square-mile area; Hamrick; and Melanie Williams, regional director of operations, were on hand in Ruskin to present Hamrick Verizon’s Presidential Heroes Award. Penny Fletcher photos.

It isn’t every day that top state officials of a company come together to honor a heroic deed performed by one of its employees. But that’s exactly what happened at the Verizon building in Ruskin on the corner of U.S. 41 and Second Avenue SE on Oct. 27.

Not only did the whole local team from Verizon turn out to give kudos to Troy Hamrick for his heroic actions but supervisors of every rank, including Jeanmarie Milla, Florida regional president over a 6,000-mile area; regional director of operations Melanie Williams; area manager Shawn Stevenson; local Verizon manager Bill Guess; and the South County Verizon team held a barbeque to honor Hamrick and meet the couple whose lives he saved.

Their numbers were matched by friends of Lois and Edward “Speed” Guerin, the Kings Point couple whose golf cart struck a pole in the cart pathway as they went home from grocery shopping at Walmart, July 30, rendering them in immediate need of first aid, ambulances and other kinds of help.

“Speed” and his wife Lois swear his nickname had nothing to do with his accident. “We were just driving home from Walmart in our golf cart, and the front of the cart struck a pole in the middle of the path,” said Lois. “People really need to know it’s there and be careful to watch out to go around it,” she said when first interviewed for a news story Oct. 1.

The couple, originally from Michigan, bought a condo in Kings Point in Sun City Center in 1979 and often shop using their golf cart as do many others in the small retirement community where it is legal to use the carts for transportation on all streets except state highways.

But this particular day, although neither could explain exactly what happened, their cart struck a pole on the front driver’s side, ejecting them both into the brush.

As Speed became airborne, he tore his leg so badly he was pouring blood. Lois struck her head and was bruised and dazed.

“There was so much blood I was terrified,” Lois said, remembering looking up from the ground at her husband, who had ripped his skin as it was pulled between the cart and the pole.

A man came to their aid, bandaging Speed’s leg with a T-shirt and stopping the bleeding with a tourniquet made from gear from his truck. Two women came and stayed with Speed and Lois until ambulances came. 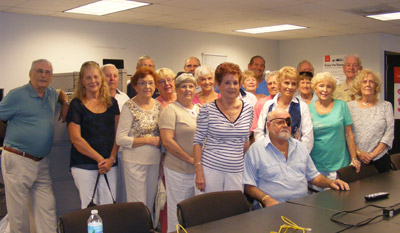 Many friends surround Lois and Edward “Speed” Guerin, all saying they are grateful to Troy Hamrick, who helped save their lives after their golf cart crashed into a pole in July.

When a news story titled “Who was that man?” ran Oct. 9 in The Observer News, The SCC Observer and The Current about the Good Samaritans, the newspaper was contacted by Bill Guess, Verizon’s local manager.

What the Guerins did not know yet was that at the exact time they hit the pole, a Verizon fiber optic technician of 16 years named Troy Hamrick had just settled down in his truck in a woodsy area nearby to eat his lunch.

“I heard the commotion and ran to see what had happened,” Hamrick said as his peers, supervisors from all over the southeastern part of the state and many friends of the Guerins surrounded him Oct 27. “Anyone would have done it.”

The Guerins, however, know that without Hamrick’s immediate,  fast thinking, Speed would have bled to death.

“I wrapped him in the T-shirt first because the cut was so deep and very long,” Hamrick said. “Then I taped it all around with easy wrap — I call it Saran Wrap™ on steroids. It’s a tape we use. I knew I had to makeshift something fast because of the bleeding.”

Hamrick made sure the couple was stable, and left them in the care of three more persons who stopped to help. Hamrick quietly went on his way without telling anyone his name.

Someone called 9-1-1 and two ambulances were dispatched, taking the couple to Tampa General Hospital. Speed was treated and released, but Lois, who had suffered head injuries, stayed two days. 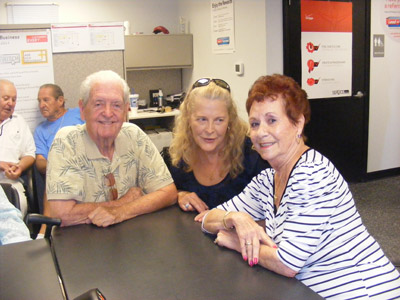 Lois Guerin, right, thanks Bo Dalgren and Fettie Bottoms for coming to her aid after her accident in July at the barbeque held at Verizon’s Ruskin office Oct. 27.

Betsy Brownell and Fettie Bottoms were out walking and came upon the scene at just the right moment, as did Bo Dalgren. But the Guerins did not know any of their names until after they came home from the hospital.

Dalgren called for the cart to be towed. Then he took all the Guerins’ belongings and got them to their house. “They had golf clubs and a lot of things besides their groceries in the cart,” he said.

The two women stayed with Lois, who got the second of the two ambulances.

“They made sure I stayed calm. I don’t know what I’d have done without them,” Lois Guerin said. Dazed and having hit her head hard, all she knew was that her husband was bleeding profusely and was taken first.

When the couple finally returned home, Brownell and Bottoms showed up at their house with all the groceries the Guerins had bought that night at Walmart. They had taken them home and refrigerated them and checked to find out when the couple was released.

When the news story ran saying the Guerins wished they knew who the man was who had bandaged Speed’s leg, which doctors later said had saved Speed’s life, Verizon supervisors decided to thank their employee and give him the company’s Presidential Heroes Award — which only eight people in Verizon have ever received.

This was done as part of the Oct. 27 event to honor his heroism in front of the Guerins, their friends, and Verizon’s areawide team.