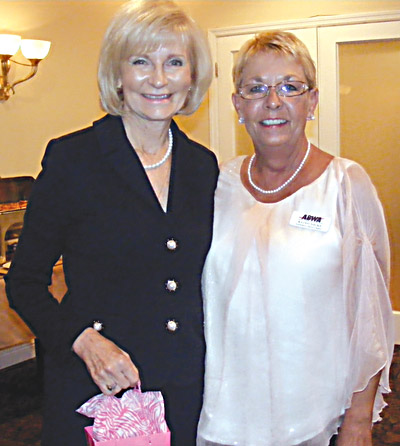 County Commissioner Sandra Murman, left, is thanked by Kathy Hicks for her presentation on county growth. Hicks is president of the Southshore Charter Chapter of the American Business Woman’s Association.
Penny Fletcher photo

A shock was delivered at the laid-back monthly meeting of the Southshore Charter Chapter of the American Business Woman’s Association held at the Sandpiper Grille restaurant in Sun City Center on Oct. 20.

For business, it came as a welcome shock.

But unless much work is done, the revelation will bring with it traffic jams and congestion.

“This area is about to explode, and I don’t just mean because of Amazon,” said County Commissioner Sandra Murman as she began her talk about Hillsborough County staff’s projections for South County. As written previously in The Observer News and The Current, Amazon’s new warehouse in Ruskin is expected to bring more than 1,000 new jobs to the area. “We have the largest port in the state and 5,000 acres of developable land,” Murman said. “We’ve projected 300,000 new people moving into the South County area in the next 20 years.”

Manufacturing companies and other large industries are now questioning the county about starting up or moving here, she added.

“The county is working in harmony with the City of Tampa in a way that has never been done before,” said Murman. “And we have a board [County Commission] that has been together for four years and in all that time have only disagreed on one thing. This is the way to get things done. The downtown area as we know it now will be shifting completely. I sit on the Port Board, too, and I know their plans to show off that hidden jewel.”

There will be 80,000 jobs when those plans — which include making beach area and tourist attractions all along South County’s shores up to and including the Port of Tampa — are put into action.

“Transportation is such a big part of this,” said Murman. “I grew up in a place where you could count on bus service to get you anywhere, and this board wants that to happen here. We know that whole areas of South County have inadequate — or no — public transportation. We have a Comprehensive Mobility Proposal in the works now that started with the Economic Prosperity Committee. We cited areas needing improvement so people can live, work and play where they want to, using public transportation.

“The county hasn’t invested a lot of dollars into planning for transportation needs, but this board has a vision that hasn’t existed before. We want to fix roads and widen and repair them where necessary. We want communities to be pedestrian-friendly and our intersections to be safer. We have a backlog of these things now because the property values and revenues plummeted in 2007.

“The recovery is slow, but is steady,” Murman added.

Murman said that Hillsborough has the strongest job growth in the state, as well as the lowest unemployment.

The Transportation Committee is working with both county and state officials to plot principal travel corridors — like between downtown Tampa and Brandon; and from downtown Tampa and downtown Brandon to the University of South Florida, Murman said.

“Eventually we want to have managed lanes for these, a fixed transit system,” she said. “But that costs a lot of money. Presentations are being made at different locations and at different organizations around the county, asking for feedback. We need to know what you want to get from the tax dollars you spend.”

In South County, an extension of Apollo Beach Boulevard from U.S. 41 to Waterset (east-west halfway to U.S. 301) is on the plan, as well as more improvements to Big Bend Road, and circulator buses for state roads 674 and 672 (aka Big Bend Road).

“We need buses people can use to shop or go to medical appointments,” Murman said, “and so that kids can go to schools.”

More than $600 million is needed to do what is necessary to make the improvements and prepare for the new residents over the next 20 years, but the budget now is $3.5 billion.

Murman said, “We have to use $1.8 billion of that [the $3.5 billion] to go to fire and law enforcement — to protections we all need. We’re only left with a small amount for parks and recreation and other things. Still, we’re working on a Master Plan to develop beachfront from Little Harbor all the way to the port and make splash parks and real tourist destinations here. “

Ways they are trying to save money were also discussed.

“This Board [Commission] has taken 270 misdemeanor offenders from jails and gotten them into housing,” Murman said. “But we need to have a community center and services for the homeless in this area.”

Murman also talked about several public/private partnerships that are working on the Apollo Beach Nature Preserve; the ferry project from South County to MacDill Air Force Base; and new systems to keep beaches from eroding, all of which are being continuously covered by The Observer News, The SCC Observer and The Current.

Residents have until Nov. 6 to cast their vote for Faces of Courage

Dreaming your way to a happier life