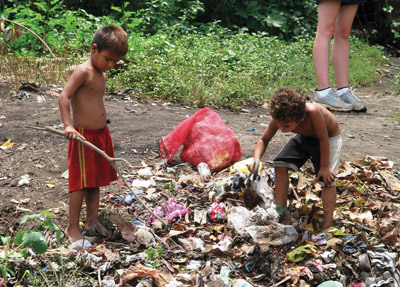 Children, many without any parents following a hurricane, sifted through garbage, foraging for something to eat. Photos courtesy of Sarah Woodard.

Sarah Junkin Woodard took on the job of eradicating poverty when she first helped found the Jubilee House Community Inc. and carried on her work with the Center for Development in Central America that operates under the umbrella of Jubilee’s 501(c)3 tax-exempt organization.

In a talk in Brandon, Sept. 14, Woodard explained how a few individuals and businesses are helping while many are making the problem worse every day.

“But it doesn’t have to be this way,” Woodard said. “Another world is possible.”

People who make donations as small as $100 a year form most of the charity’s base.

“These are not the wealthy few but those on the edge themselves who understand poverty,”
Woodard said.

Nothing in this country can compare to the poverty in underdeveloped countries like those where Woodard lives and works.

Meanwhile, Woodard said, many companies are moving their corporate headquarters out of the United States and paying wages of as little as $1 a day overseas in very poor countries.

The problem would seem insurmountable, except that her organization has found a way to help and is spreading the word so others can do the same.

“Don’t support those who move their factories overseas,” she said. “Find out who they are and buy elsewhere. There are 2.4 billion people in the world living on less than $2 a day and 936 million suffering from malnutrition while … 85 of the richest people in the world own more than what 3.5 billion of the poorer people own? That means 85 individuals own more than half of what the world’s population owns?

“One in every two children live in poverty, but I’m part of the Jubilee House Community trying to build another kind of world,” she said. “A more just, fair world.” 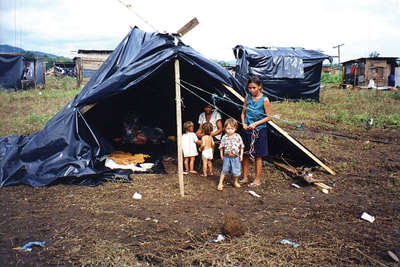 When shelter was finally provided for the people who suffered a loss of everything they had from Hurricane Mitch in October 1998, it was nothing more than these tarps. There was no running water and very little food.

Woodard knows about these things firsthand. She has lived and worked in South America for more than 20 years. Near where she lives in Nicaragua, Woodard said, one out of six people live on less than $1.25 a day even though the United Nations says that nation has done more than any other Latin American country to lower hunger.

Woodard showed photographs of beautiful fruits and vegetables grown there and in other places in South America. “The land is rich,” she said. “It can grow a lot of food. But big companies come in and buy it for nothing and then resell it for big prices other places — including the United States.”

There are, however, individuals and companies now beginning to help the poor populations,
Woodard said.

“They help them start small businesses. They give them animals, and seed, and some equipment. We must learn which companies these are and how to purchase from them. We must also purchase some of the beautiful handicrafts these [poor] people are capable of making.”

Woodard said we are not told facts that allow us to put things into perspective. That is one of the reasons she is now touring the United States, speaking about the Center for Development in Central America.

“In the last 15 years, Nicaragua has had two Category 5 hurricanes,” she said. “Although Superstorm Sandy was the largest on record, it had only Category 2 strength when it hit the U.S. Northeast coast, and 235 people in seven countries died from it. Hurricane Katrina was a Category 5 and 1,833 people died. Most in the U.S. know the horror of that.

“Yet when Typhoon Haiyan hit Southeast Asia in November, 6,241 people died and 1,785 went missing in the Philippines.

“And when Hurricane Mitch hit Honduras and Nicaragua in 1998 as a Category 5, 11,000 people died and another 11,000 were missing. When the people who lost everything finally got aid,” Woodard said, “it was just a tarpaulin and the bare minimum of food, and they stayed that way a long, long time. In fact, many have never recovered.”

Yet these nations have many natural resources, like clean water from large lakes and aquifers and beautiful beaches as well as mountains.

Unfortunately, the rain forests are disappearing at a rate of 500 acres a day with people illegally exporting wood, Woodard said. 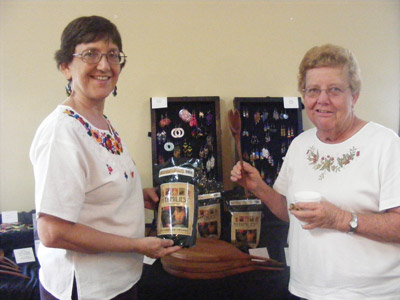 Sarah Woodard, left, of the Nicaraguan Mission, shared the story of how some people are helping eradicate the extreme poverty in South American countries like Nicaragua that was hit with Category 5 Hurricane Mitch in October 1998 and has never really recovered. Betty Morrow is pictured at right.
Penny Fletcher photo.

“But we have found some really good people who are helping and we want to add more. That’s why I am touring and speaking at this time,” she said.

Woodard said that if people would buy the products from companies helping, that would be a great start. “Businesses like Once Again Butter in New York and Nuts to You in Canada and Their Bucks Coffee in South Carolina are helping the people out of poverty.”

You can do as they do and help the farmers while growing your own business, she said.

“We have started a cooperative that made organic clothing, created sustainable jobs that pay fair wages, and now work with a cotton gin and baling project.  We have also started a fund called the VIDA Fund that finances start-ups, at a low interest rate.”

Past projects have included building solar composting latrines and low wood-use cookstoves. The fund is also responsible for growing fish in aquaponics tanks that feed and water plants, which in turn clean and aerate the water for the fish.

Solar and wind power are in heavy use. In fact, Woodard said, Nicaragua even uses the geothermal energy found in its volcanoes and has come up with ways to sustain a 50 percent renewable energy rate.

To find out how you can help our South American neighbors, visit http://jhc-cdca.org/or find the Jubilee House Community on Facebook.

To donate online, go to http://tinyurl.com/5rwxa.

Medical supplies and people in the medical community are always needed as well. 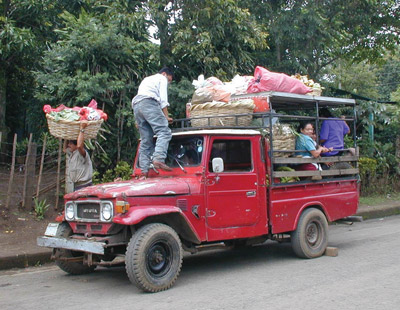 People loaded up what they could after the rain stopped and the area dried out.