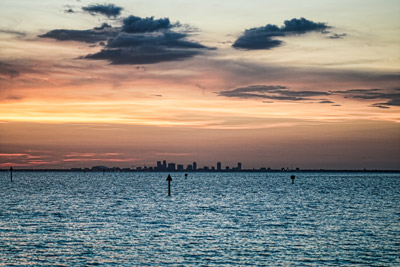 I withered through the better part of 20 Florida summers, always longing for the cool weather of autumn in paradise. And now it is upon me in the city — and I find myself missing the heat. Mitch Traphagen photo.

I gazed down 34th Street in Manhattan toward the Empire State Building reaching for the heavens, and could see the heat shimmering from the pavement into the humid air. I love that view — it’s magical. It was a rare hot day in the city. It seemed last summer there was news of heat wave after heat wave, an event roughly defined as three or more days with high temperatures over 90 degrees. This year there have been none, or perhaps one, depending upon what newspaper you read.

But now it is September, and there are no longer stories about heat waves or the lack thereof. The coming of autumn is everywhere, it is in the prose on pages printed daily, it is in the leaves that I could swear began falling in late July from the trees along the Hudson River, trees beautiful enough to be in competition with the wall of skyscrapers just across the water. Even for a day like today, autumn is in the air.

But autumn’s arrival in Florida is a number of weeks off, despite what the calendar may say. When I landed in Tampa late on the first day of September, it was a balmy 87 degrees and humid. There are those who enjoy summer’s heat, just as there are those who claim to love the below-zero temperatures and snow in Minnesota. My preferences tend toward the more moderate.

The cool and wonderfully comfortable summer in New England is thought by many to portend another cold and snowy winter, perhaps even worse than last year’s winter with phrases such as “snowpocalypse” and others unprintable as descriptors. New York City itself is largely separate from New York state in weather (and many other things) and, depending on varying definitions, is considered “temperate continental with subtropical influences.” Last winter did much to suggest otherwise.

And now, after withering through day after day of 90s for the better part of 20 Florida summers in the wait for autumn in paradise, it is upon me in the city. Without warning, without ceremony — it’s like someone just flipped a climate switch. September is here and people speak of the last days of summer, some wistfully, some apocalyptically. It seems the entire summer was autumn. I’m not complaining.

But after a week in Florida, I realized that I have been missing the warm temperatures and thick air that feels good in my lungs.

Upon my arrival back in South Hillsborough, one of the first things that I look forward to is having dinner at the lounge and tiki hut at Little Harbor. I love watching the sunset there, and perhaps as much, watching the tourists watching the sunset. More often than not this time of year, the hot time between summer and fall, the sunsets are truly amazing and, to me, proof that God is the artist of inspiration for all artists. Deep blues, pink, gold and sometimes ominous grays and blacks paint the sky in ways that can crack open my limited imagination. My camera can marginally capture the colors, but it can’t adequately capture the feeling of standing alone on the beach seeing the cosmic art exhibit play out, only for mere moments, around and above me.

Heather is a wonderful waitress. She went above and beyond to ensure our order was just what we wanted. She is pleasant, attractive and attentive; she has all the ideal qualities. But without giving any direct indication of such, she also seemed … somehow sad. Six months ago, perhaps, I would have understood that sadness. As studies and polls have shown ad nauseum, sadness is something that is somehow ensconced in the Tampa Bay area in larger numbers than in other metropolitan areas. But now, as a visitor as much as a resident, I look out the window and see the palm trees, the beach and the water and the amazing sunset and wonder, “How can anyone be sad in paradise?”

It’s likely that after a day of serving tourists she was more tired than sad. It’s equally likely that I simply read her wrong. Regardless, if the former, that is understandable. I would probably be homicidal.

The life in Florida that Michelle and I made for ourselves had been interrupted before, since we originally moved here in 1994. Once we went cruising for six months to the Bahamas and beyond. Once we moved back to Minnesota to help take care of her father. Minnesota. In October. That lasted less than two months. Once, during the very height of the insanity of the housing boom, we moved to Iowa for nearly two years. Yes, Iowa — to a small town that seemed much like Mayberry. Although in reality it was roughly the distance of Ruskin to Brandon to Iowa’s second-largest city and the largest university in the state (which is quite large), it had the feel of being in the middle of nowhere in a flyover state — to the degree that if nuclear war had broken out, I’m not sure that we would have known about it.

But none of that, small town Iowa included, was a bigger cultural shift than Florida to the New York City metropolitan area. Our life up there and my life down here are so vastly different in every possible way — it’s amazing these two places are on the same planet, let alone in the same nation. Yet somehow thousands upon thousands of snowbirds make that cultural shift each winter. For me, making that jump between places is both difficult and incredibly stimulating. The first few days are hard, and then I get settled in and don’t want to leave. Only to do it all over again a few weeks later. My internal compass is, apparently, a bit fickle. Perhaps that’s how the true snowbirds (and transplants) feel, as well. If so, I’d love to hear from you about your experiences.

I handed the check back to Heather and she smiled and thanked me. I thanked her (it’s called Minnesota Nice — a Midwestern thing). She is a pretty young woman and suddenly I was no longer sure about that trace of sadness. Perhaps she came from somewhere else and was struggling to adjust. We all have our own struggles, and sometimes they come to the surface — an occasion that, in my opinion, should bring out empathy for the challenges of our fellow travelers in this fleeting time and place. We are in this together, and, to me, we’ll get through this so much better if we try to stay together, to help one another. That’s what it’s really all about, I think.

Or, perhaps, I was just wrong about her and there was no sadness at all.

I walked out the door and onto the beach just as God was getting out His paintbrushes, preparing for the largest work in the universe as yet another stunning and all-too-fleeting abstract canvas of indescribable beauty. I gazed at the sky and hoped I was indeed wrong about any sadness.

I love looking down 34th Street and seeing the Empire State Building — it is a view out of a storybook. I love the city — the parks, the neighborhoods and the people. But right then I felt great about being here, breathing the warm humid air so thick I could feel it and watching God paint the sky. With that, any thoughts of sadness evaporated into the heavens.