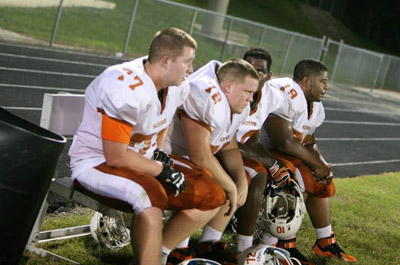 Bad weather or good weather, it doesn’t really matter to the Lennard Longhorns, who took their record to 4-0 Friday night with an 8-0 win over Blake High School.

On a night when the heavens opened up with a biblical downpour that lasted throughout the game, the Longhorns held firm, limiting Blake to virtually no yardage in what quickly became a test of each team’s running game. With a soaked football and wet field making passing difficult, this was a ground war that Lennard won convincingly, extending the team’s record start to the season.

“The conditions were horrible, an absolute mess,” said Lennard coach Keith Chattin. “It rained the whole time, the field was in bad shape, the footing was terrible; so the weather really watered down the game plan.”

The Longhorns got a safety in the first quarter to take the lead, 2-0. Later in the quarter, Diontae Johnson took a punt 75 yards into the end zone for a touchdown. “Both offenses couldn’t do anything because the field was in such bad shape, so we really just tried to grind it out and run the ball,” Chattin said.

The Longhorns had tried to throw the ball early, “but,” said Chattin, “the ball just became wet and then it got heavy, so we just had to run the ball. When we got up 8-0, we knew they had to score and get a two-point conversion to tie, so we just kept running the football.” 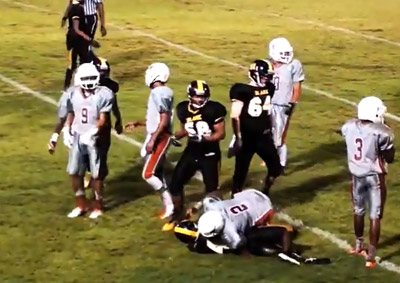 Lennard scored a safety and ran back a punt for a touchdown to defeat Blake 8-0. Big County Preps photo.

“They played lights out,” he said. “It was the best the defense has played since I have been here over the last three years,” Chattin said. “This team can have a really special season if they stay together and remain focused.”

Chattin and his coaches never thought about records at the start of the season, but, he said, “we thought if the kids played hard and stayed focused we would have a pretty good season. But you can never speculate on wins because we are in a really tough district [6A].”

Giving up just a little more than 100 yards a game, Riverview is just a few plays away from being a 3-0 team. The Sharks also had to contend with bad weather in their 7-6 loss to Wharton. But no one on the team is letting their heads drop, knowing the team could easily have several more wins under its belt.

“I was very disappointed we couldn’t move the football well enough to seal the victory,” said coach Mike Thornton. “Our kicking game is an area we need to improve on. I think we have to be one of the scrappiest 0-3 teams in the area, no doubt that.”

The stats bear Thornton out. The Sharks gave up only 117 yards against Wharton. Thornton said, “We are giving up less than 120 yards a game over three games. I would guess we are one of the toughest defenses in the area.”

Thornton and his staff preach “play well and the scoreboard will take care of itself.” He said,  “I think it got through to the players. They were down that we lost, but they were understanding the adversity we had to face with the weather and they kept their heads up, and I was proud of them when they walked off that field. It’s a scrappy group. We are playing several guys both ways and they are playing at a high level. We just have to find a way to move the football.”

Riverview will be looking for some home comfort Friday night when they host Middleton.

“Last year, we showed signs of playing well at home, and obviously it’s nice to play at home,” Thornton said. We will have a little bit more time before the game to prepare and have some quality meetings. At the high-school level, it’s very advantageous to be at home.”

A week after leaving high-school football pundits with egg on their faces with a one-point win over heavily favored Alonso — a game some predicted they would lose by 40 points — East Bay played tough again against a favored opponent, losing by one point to Spoto.

One-point games are becoming a habit at East Bay. The team beat Riverview by a single point a week before their victory over Alonso. This time, however, they were on the losing end, going down 13-12. East Bay is now 2-2 for the season. 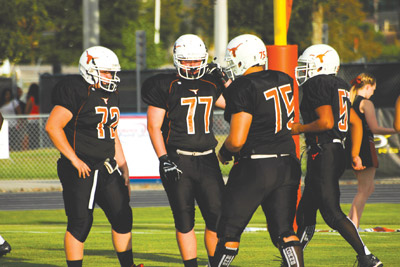 The next four weeks will be a real test for the Lennard Longhorns as they face Hillsborough, Robinson, Jefferson and Armwood. Jacob Council photo.