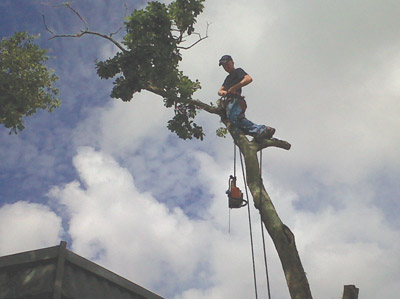 T.J. Stinson has traveled as far away as New Jersey for his tree business. Sunni Stinson photos.

Sunni Stinson has some advice for anyone trying to start his own business: Plan carefully and do everything by the book.

Sunni is the successful owner of TJays Tree Service in Ruskin with her husband, T. J. The couple started from the ground floor in the highly competitive tree business and three years later they are still growing strong.

A combination of charity work, careful planning, a willingness to go where the work is and operating fairly with customers has been the key to their success, according to the couple who thrive in a business that is all too often plagued by fly-by-night operators who take advantage of customers and who carry no licensing or insurance.

“There are some fly-by-night companies out there that prey on people, especially older people, telling them they need to get things done,” Sunni Stinson said. “They really like to go out to Sun City Center and hound the older people there, and some of the people don’t ask for licenses and insurance. But in our case, we always have that stuff on hand.”

Fewer than half of small businesses started in the last four years are still operating, according to the Small Business Administration.

Among the reason cited for the high rates of failure are lack of funds, lack of a strong business plan, no strong marketing plan, and lack of proactive, continuous, interactive customer dialogue to build understanding.

Having hung out their shingle for more than three years now, the Stinsons have avoided many of those early pitfalls, and it started early, according to Sunni.

“We didn’t know too much about starting a business in the beginning, so the first thing we did was go to a certified accountant to make sure we set up everything properly. We wanted to make sure we would be doing everything correctly from the start. I had seen other people struggle.”

Starting out with fewer than 15 customers, the company has grown to almost 100. They are currently one of the main tree service providers for Kings Point.

“In the beginning, we just went out and knocked on doors and made sure we did quality work and went from there,” said T.J. Stinson, who grew up in the tree business, working for his father who ran a local tree service business in South County for almost three decades.

“We had done volunteer work for the Ruskin Woman’s Club, and we got the word out, and it really went from there by people passing on our name by word of mouth,” Sunni said.

Treating customers well is also a key to the company’s success. “My husband is always very honest with customers. He treats them like family so they go back and tell other people.”

Sunni is also very adamant about letting customers know there are alternatives.

“When we bid a job, I always tell people they don’t have to go with us. But if they do pick someone else to make sure they are licensed to do what they are doing. I would hate to see someone hire someone who is not insured and then they cannot pay for the damage they have done.” 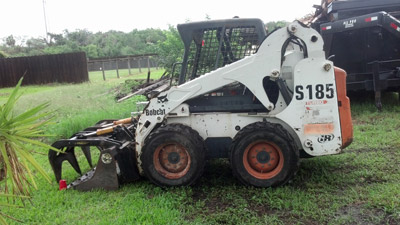 TJay’s Tree Service grew from fewer than 15 customers three years ago to nearly 100 today, thanks in large part to word-of-mouth advertising.

While most of their work is in the Ruskin, Riverview, Sun City Center area, T.J. Stinson doesn’t think twice about jumping in his truck and taking to the road for work.

“I travel all over the place,” he said. “When the hurricanes come, I will travel there. Wherever there is an ice storm up North, I will go there when there is no work down here,” said Stinson, who took his truck and equipment to New Jersey after Hurricane Sandy devastated the East Coast in 2012. “I am mobile, so I can really go anywhere.”

Stinson is also insistent that his customers get other estimates on his work, even his repeat customers. “I always tell them I don’t want to take advantage of them. If I can compete with someone else’s price I will. If not, call [the other company] and let them do the work, and I will be there next time.”