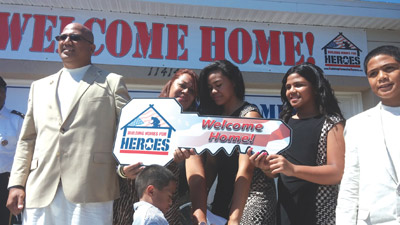 U.S. Army Sgt. Visala Tui and his family are handed ceremonial keys to their new home in the Hibiscus Island community in Riverview. Kevin Brady photo.

There’s a welcome home — and then there’s what happened last weekend in Riverview.

U.S. Army Sgt. Visala Tui and his family were handed the keys to a new mortgage-free home in the Hibiscus Island community as thanks for his military service.

“It’s just amazing,” said the publicity-shy Tui as he entered his new home for the first time.

Tui joined the military in 1997, serving 14 years as a combat medic in Afghanistan and Iraq. While serving in Afghanistan, Tui and his best friend, Cpl. Billy Gomez, were the victims of a bomb attack on their vehicle. Gomez died in the attack, which left Tui needing numerous surgeries.

The welcome-home party drew hundreds to the quiet community off Symmes Road, including Gov. Rick Scott and Louisiana Gov. Bobby Jindal. Onlookers applauded Tui as he arrived in a motorcade complete with a band and motorcycle escort.

“I just wanted to be here to support the sergeant and this wonderful organization today,” said Riverview’s Sonny Green, one of more than 200 people who lined the street in this quiet suburban neighborhood to welcome the soldier to his brand-new home. “These types of things are very important, especially to look out for the guys that are coming home. A lot of them are injured and they need our support.”

The event was organized by Building Homes for Heroes, a nonprofit group that gives mortgage-free homes to wounded veterans who have served in Iraq or Afghanistan.

“This rebuilds the lives of our veterans and makes our communities better places,” said Andrew Pujol, president and founder of Building Homes for Heroes. He said an additional 35 mortgage-free homes will be built in Florida, five in the Bay area, within the next year.

One of the fastest-growing charities in the country, the group handed out keys to 17 mortgage-free homes in 2013 and hopes to give away as many as 30 this year. The group’s expense percentage — the percentage of expenditures that goes directly to program-related activities — stands at 95.

“This is not only a great day for the Tui family, it’s a great day for Florida and our country,” Scott told the audience. “These are days you feel good about because our country cares about our veterans. We are all only here today because someone was willing to sacrifice and put their lives on the line to defend our freedom. Just since Sept. 11, 2001, we have lost 344 military personnel from Florida overseas.”

Vickie Montgomery, who attends First Baptist Church in Gibsonton with the Tuis and is herself a veteran, said she wanted to show her support for the family.

“The [troops] are not getting recognized like they should,” Montgomery said. “There are a lot of people getting wounded and dying over there, and it’s important we recognize them because they are protecting our country. I served at the end of the Vietnam War, and things like this did not happen. So this is very important to show them we appreciate what they are doing.”

The event showed the nation’s appreciation for its military, said Major General Aundre Piggee. “As we see the terrible events unfold in the news every day, you can take confidence from the fact that people like Sergeant Tui are working to keep us all safe. As President Obama said in his address to the nation just the other night, ‘Our own safety and security depends on us doing what it takes to defend this nation and uphold our values.’ That is exactly what Sergeant Tui has done in service to his nation.”

Founded in 2006, Building Homes for Heroes gives mortgage-free homes that are designed to meet the needs of the men and women who have been injured while serving in the military. “These homes not only help to remove the family’s financial burden, they help to restore the individual’s freedom and enable the veteran to lead a more independent and productive civilian life,” according to the group’s mission statement.

Neither the president nor board members at Building Homes for Heroes are compensated for their duties.

For more information on Building Homes for Heroes, visit www.buildinghomesforheroes.org. 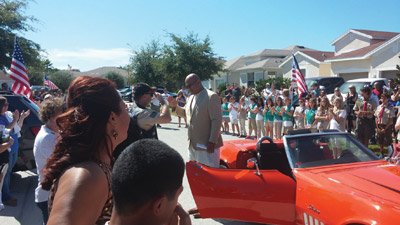 Sgt. Visala Tui and his family arrived in style for the ceremony, ushered in by a procession of classic cars.
Kevin Brady photo. 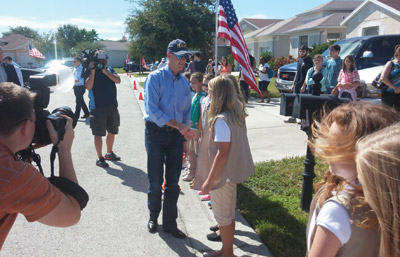 Florida Gov. Rick Scott was on hand for the ceremony and praised the service Sgt. Tui and others have given.
Kevin Brady photo.

Some members of the Tui family could not hold back their emotions during the ceremony. Kevin Brady photo.

Home is where the love is