Fourth in a series of stories highlighting sponsors/participants in the Alzheimer’s, Dementia Hospital Wristband Education Project 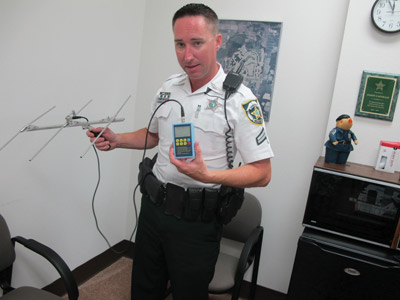 While hospitals may use the Alzheimer’s/Dementia Hospital wristband to identify patients who have dementia-related concerns, the Hillsborough County Sheriff’s Office’s Safety Net team has technology to track people and children who have gone missing.

HCSO added Safety Net, a program and technology devised by LoJack in 2009 to help find and rescue missing persons, whether they were children with autism, adults who have dementia-related illnesses, or war veterans with brain abnormalities. LoJack is the company that also offers technology to track stolen vehicles.

According to Cpl. Eric Powell, the HCSO used Safety Net because the nationwide program can be used with other policing agencies if and when a person goes missing outside Florida. LoJack also handles the administrative details, enabling the Safety Net-trained team of 18 deputies and two supervisors to concentrate on search and rescue.

“Our goal is to have a Safety Net-trained team member on each shift,” Powell said. “They are already working. Time is everything with a missing-person call.”

Safety Net uses radio-wave technology because it can work almost anywhere. It does not use GPS technology. The wristband is worn 24/7 by patients and is changed monthly; its batteries are replaced every six months.

Safety Net training consists of two 12-hour classes, one using training techniques to find people by a land search. The other trains  deputies to execute an air search using helicopters. In a “callout,” ground and air searches alike are used. The Safety Net air-search tool can track up to seven miles away a missing person who is wearing a wristband, while on the ground it can track the wristband up to a full mile away.

The program was successful enough in the last year to find 11 missing persons in the countywide area in an average time of 28 minutes.

Two weeks ago, Powell said, they received a callout for a missing person in District 3. Immediately there were three Safety Net-trained deputies in that district, quickly followed by three more.

“I had six deputies on the ground,” Powell said, “able to respond immediately. It took 11 minutes to find the missing person instead of hours. This system saves us money, and we find the people quicker than a traditional search.”

Powell said that currently they have 75 clients registered for Safety Net. There is a charge. There is a one-time enrollment fee of $99, and there is a $30 monthly fee to be on the program. However, according to Powell, the Hillsborough County Sheriff’s Office has acquired funds to make sure that the cost to some families is not prohibitive. There are specific requirements necessary to be added to the program. A person must have a cognitive disorder and be likely to wander without having a sense of the danger he or she could be in by straying from the protective custody of their family or caregiver.

In the past year, the list of Safety Net clients has risen by 20 percent because the team is being more proactive in alerting the community. What Powell wants to emphasize is the peace of mind the wristband can give family members or caregivers, who also use chimes on doors and other devices to tell them if a person is trying to leaving the safety of his or her home.

Powell says there is more to this assignment than search and rescue. Deputies recruited to be Safety Net team members are chosen because of their personalities and their potential to be good with the recovery of people who have special needs. Powell explains a police uniform could make people, especially children, fearful, so extra care must be taken in approaching missing wristband-wearers. Team members often speak to patients in low, soothing tones.

Powell said of the wristband-wears: “Maybe it [a Safety Net team member’s calm approach] gives them a sense of peace. Maybe in the back of their mind they can feel a little more comfortable.”

For more information on the LoJack Safety Net program, call the Hillsborough County Sheriff’s Office at 813-247-8567.

Home is where the love is