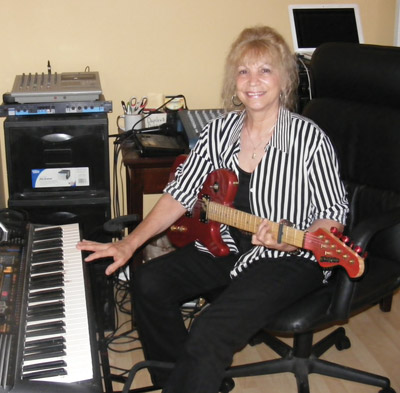 Cyndi Burger plays guitar, keyboard and harmonizes with herself. Thanks to new technology that allows her to lay down tracks for any instrument she wants to accompany her, she sounds like a whole band as she performs songs from the early 1900s through current songs of today. Penny Fletcher photo.

She sings and plays songs popular more than 30 years before her birth and still knows many of the most popular songs of today.

Listening to her is like hearing nearly a hundred years of music.

Remembering the old songs her parents taught her, Cyndi Burger sat in her home in Sun City Center and talked about how her life has always been filled with music.

She moved to Sun City Center only three weeks before her interview Sept. 5, yet the home looked like she had been there for years; no boxes, no signs of moving and everything in place.

Her workroom is in a sunny front corner of the home and is filled with computerized musical equipment, instruments and hi-tech sound devices. With these she is able to sing both melody and harmony — harmonizing with herself — while playing a keyboard and a guitar. As she plays back her tracks, she re-records them while electronically adding other instruments.

“I lay down my own tracks,” she said. “I don’t want to use a Karaoke machine because then I wouldn’t be doing the whole vocal myself.”

In fact, she said one night in the mid-1980s while she was performing, a friend came and told her there was a club nearby where people were doing “ka-roke.” It was the first time she had heard of such a thing.

But Karaoke isn’t a rival for Burger. She’s a real entertainer on a mission to make her audiences happy.

Born and raised in Saint Louis, Burger was 10 when her mother died. But well before that, her mom had taught her what Burger now refers to as “the old songs” like Bill Bailey Won’t You Please Come Home and Let Me Call You Sweetheart.

“My dad played harmonica at nursing homes in the area just to make people smile,” she recalled. “I would tell him I wanted to sing an Elvis song, but he’d always say something like ‘no, let’s do Let Me Call You Sweetheart or something like that because he’d say ‘that’s a nicer song.’ So my sister Rita and I learned all those songs from a generation or two older than we were.”

At 65, she still keeps up with current trends and performs some of today’s music. “Most of my music comes from the doo-wop of the ’50s through the ’90s, but I love all the real old songs, too, because the audiences can’t seem to get enough of that kind of music.”

In her early teens, Burger was part of a nine-piece band in the mid-1960s called Cyndi and The Coachmen that played a lot of Motown and Ike and Tina Turner tunes.

During that period, her cousin was strumming a broomstick one day and said, “I’m going to learn to play a guitar and have a band and you’re going to be the singer.”

Burger says if it hadn’t been for that, she probably never would have taken her music really seriously.

For years, she worked off and on in various duos and trios but didn’t go all the way as an entertainer until after she retired from her full-time job with the St. Louis Police department. That was when she first started playing a guitar while she sang.

Before moving to Florida in 1980, she worked as a police recruitment coordinator, the job from which she retired.

“It was kind of like a teaching position,” she said. “I’d make up their tests while they were in training, do their paperwork, and even type up their diplomas.

“I moved first to Tampa because I knew some people there, but ended up moving to Auburndale and until recently drove back and forth to this area two and three times a week to play,” she said.

When she first moved to Florida, she said she had imagined doing the Jimmy Buffet beach-bar scene, but lugging her equipment across the sand under a blazing sun wasn’t all it was cracked up to be.

“It was hot, and I played mostly to tourists, many of whom were inebriated,” she said, laughing. “I learned very quickly who my real audience was after a friend had me booked at a local restaurant where he knew somebody.”

She said she didn’t even have a repertoire yet and had thought she would need a partner to start getting  booked.

“They usually want to hear more than one person. The people who do bookings usually say they want a band.”

At first, she thought she needed a partner but she said the audiences seemed to like her the way she was. “Then it was just me and my guitar.”

Gradually, though, she learned about drum machines and multi-track recorders where she could make her own background and harmony tracks and sound like a full vocal group.

“I realized I could actually support myself with the old songs I sang with my father. Florida is a mecca for people who love those old songs,” she added.

Just recently she realized all her bookings were in the South County area and the 60-mile drive from her former home didn’t make any sense.

“I love it here,” she said, looking around at her new home in Sun City Center. “My first exposure to boomers and seniors here was at the fraternal organizations, like the Moose and Elks and American Legion.”

Then she started at Danny Boys’ restaurant, and played there eight years, until it was sold.

“I still play there some, for the new owners, and I was thrilled when I was picked up at Nick’s Alpha House in Apollo Beach to play on Tuesday nights. People have room to get up and dance there so that calls for a different kind of music.”

Burger can also be heard weekly at the Bella Cucina restaurant in Sun City Center Plaza on Thursday and Friday nights. She is also available for bookings by individuals and groups and often performs at Cypress Creek Assisted Living and Aston Gardens.

“For me, there has never been a truer statement than ‘do the thing you love and you’ll never work a day in your life,’ ”she said. 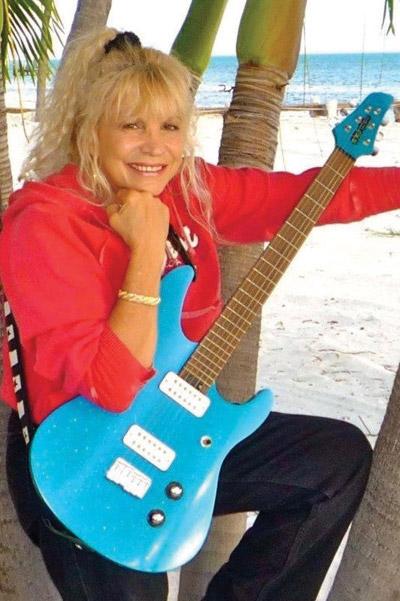