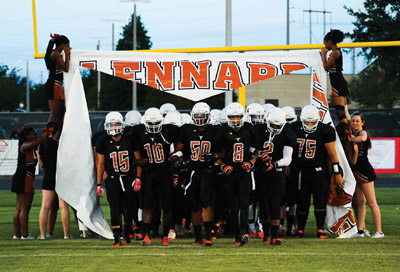 Some high-school football pundits didn’t expect much from East Bay High School when they matched up against Alonso High. One local paper predicted East Bay would lose 55-9. But someone forgot to tell the East Bay players they were supposed to lose. Instead, East Bay walked away with a 16-15 victory over the Tampa powerhouse.

“Someone thought we were the underdog, but we sure didn’t,” said East Bay coach Frank LaRosa.

“It was another typical East Bay one-point victory,”  he joked.

It’s the second straight week East Bay has won by one point. They downed Riverview 7-6 in their previous game.

With Alonso scoring on an 80-yard run to put them ahead 15-9 with five minutes left, other teams might have dropped their heads, casting their minds back to the 35-3 drubbing Alonso inflicted on East Bay last season. But this is a different East Bay team that is proving it fights to the final whistle.

Immediately after the Alonso touchdown, East Bay drove down the field and scored the go-ahead touchdown on a quarterback sneak.

“We had patience on offense and we were very methodical and we stayed with what worked,” said LaRosa. “They have a great quarterback at Alonso, but although they had a couple of big plays on offense, I thought our defense did a great job of holding them in check. I was very proud of how the entire team played.”

Next up for East Bay is Spoto, a team that regularly figures in the postseason playoffs.

“They are a super talented team with some athletes in the skill positions, that is for sure,” said LaRosa. He said the key for East Bay is to play “a well-disciplined game and not to make many mistakes and give them any big plays.”

Just down Interstate 75, the Lennard Longhorns continued their history-making season with a 27-13 victory over Chamberlain. The team is now 3-0, its best start in school history. 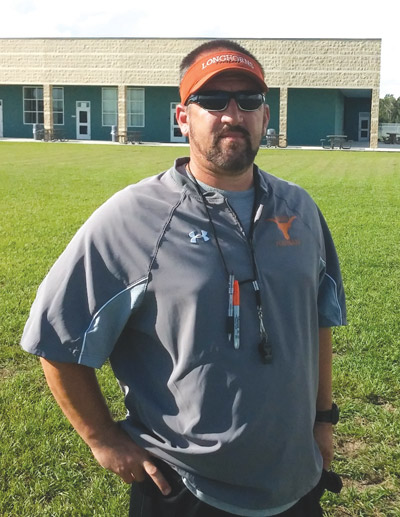 Third-year Lennard coach Keith Chattin said Chamberlain has “a very solid team, but our kids played hard, as usual, and they found a way to win.”

Lennard went 1-9-0 last year and 0-10 in 2012. “We have been through it the last couple of years,” said Chattin,  “so winning is a new thing for them. I was fortunate enough in my playing days that we won a few games, so I am used to it. But they are just now getting used to winning, so they have to learn how to live with that and still come to games hungry and ready to go.”

Chattin sees the team coming together as a complete unit now.

“The last couple of years we had one or two players that could actually play. But now they are depending upon each other, and when things get hard, they are sticking together and playing harder and finding a way to win.”

Chattin wants his team to enjoy riding the wave of success but, come Monday morning, “I want them to stay focused on the process and to keep practicing hard,” he said.

Chattin is also starting to see the value of his three-year plan paying off. He said, “When I got here, they didn’t lift weights the way they should, they didn’t have a strict practice schedule or an off-season plan, and, as I told them, their bodies have to mature in the weight room and get ready for their opponents. But they have just grasped everything, and, honestly, it’s a pleasure to work with them because now they understand what it means to be a winning football program.” 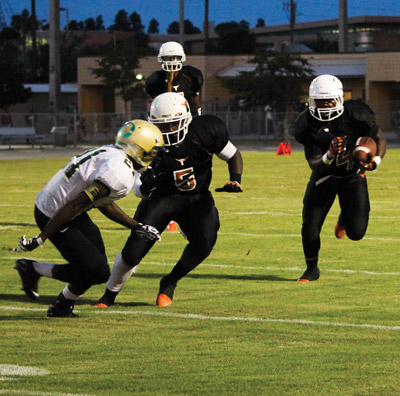 Next up for Lennard is Blake High, a high-powered athletic team that has had Lennard’s number in the last couple of seasons. “I told our kids we are not going to get beat up anymore,” Chattin said. “We are not going to win every game, but we are definitely going to be competive and play hard.”

Riverview’s 14-7 loss to Brandon could have been a very different game had the Sharks taken advantage of turnovers during the game, said coach Mike Thornton.

“This was the second week in a row that we failed to take advantage of opportunities that were given to us by our opponent,” said Thornton, pointing to four turnovers by Brandon that the Sharks failed to capitalize on. “When you do that, you are not going to win. Our defense was playing outstanding football. I am very proud of them giving up just over 100 yards a game, but our offense needs to find a way to score some points to give us a chance to win.”

Turning that around will take practice and attention to detail, the coach said.

“Our quarterback played well, but we need to get some offensive urgency inside the 20,” Thornton said.

Coming on the heels of a one-point loss to East Bay, the 0-2 record is not indicative of the team’s ability, Thornton said.

“We are a kick or two or a play or two away from being 2-0. We are playing very competitive football.”

Next up for Riverview is Wharton at home on Friday night.

“We want to establish some long drives and give our defense a chance to stay off the field and get some points on long possessions and try to keep the clock in our favor,” said Thornton. “We need to regroup … and talk about our progress and our improvements. This was a program that was unsuccessful for several years, but we have cut our deficits in half and our defense has been outstanding. We just need to find a way to score some touchdowns and we will be fine.”