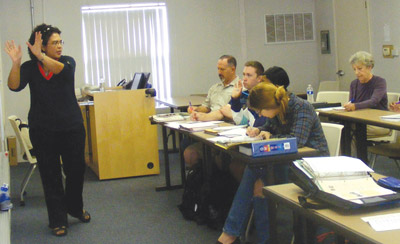 Mixing 18- and 80-year-olds in the classroom is a win-win situation for students and teachers alike.

A special program at Hillsborough Community College in Ruskin allows Florida residents 60 years and older who have lived here more than one year to attend classes without charge. To register, the elder students must show two forms of identification and Florida residency such as a driver’s license, voter’s registration card, vehicle registration or home purchase as proof.

They must also agree to “audit” the classes for school administration.

Allen Witt, president of the South County HCC campus, says the senior tuition waiver is a win-win for both the college and the community.

“It fills classroom seats that would otherwise have gone empty, while providing an educational service for our seniors,” Witt said.

He explained that while many other Florida colleges offer senior waivers, few of them publicize the service, and few eligible elders take part.

“We here at the HCC campus decided right away that it was very important to get the word out. We understand that our classes benefit from the rich life experience of area senior citizens. So beginning in January 2010, we alerted the local press of the waiver, and since that time, hundreds of seniors have enriched our classrooms, and our younger students owe them a debt of gratitude.”

Professors and students of all ages were interviewed for this story and not one disagreed with Witt’s assessment of the opportunities that came from mixing the generations.

Mary Perkins, now 80, was born in Ontario, Canada, and raised in Buffalo, N.Y. She attended the University of Chicago on a scholarship right after high school and has studied both Latin and French.

“But for more than 50 years I’ve had it on my bucket list to learn Spanish,” she said in a telephone interview Sept. 9. “We have many different ethnicities in our family, and I have always wanted to speak Espanol.”

Perkins said she first heard about the chance to attend HCC in The Observer News.

“I saw it in The Observer News on the last day of sign-up for this semester and rushed right down and enrolled,” she added.

Alex Schmokel has worked with Perkins on projects and says he enjoys it very much. Currently he drives to class from his home in Dade City and has a job with Anita’s Accounting Solutions. “My goal is to be a Chief Financial Officer for a Fortune 500 Company,” he said.

Perkins said she often talks to Lindsey Brown, who reminds Perkins of her daughter.

During one of the classroom interviews Sept. 10, professor Veronica Bradley said she enjoys mixing the generations in her classes. She said that she’s been at the campus for about five years and likes the rapport between the older and younger students.

“They blend very well,” she said. “The younger students help the older students figure out the issues regarding Internet accounts and Web access to submit online homework, and the older students are a tangible reminder to the younger ones that hard work leads to professional success and, in time, to retirement.

“I personally love to see the interaction between the wisdom of the older students and the energy of the younger ones,” Bradley said.

Some students in Anthony Sardone’s sociology class were even closer.

Edgar Herrera has been in the Army and is now in the National Guard. He and Foster Klaiman, 78, often talk about the military — how it has changed and how it still remains the same.

Professor Sardone has been at HCC in South County since 2010 and says that from day one he has seen diversity in the classrooms.

“It’s rare if we don’t have at least three generations present in any particular class,” he said. “I’ve found the more diverse the particular class is, the better the class discussion and the overall atmosphere within the class will be.”

Sardone said that when he took sociology classes as a graduate student he learned more when three or more generations were present in the room.

His students agreed that they learn a lot from one another.

The sociology class is Klaiman’s fifth since he found out about the tuition waiver.

Even though he went into the Army, he still attended college in the 1950s and earned a Bachelor of Arts degree. He goes now because he just loves to learn.

“I love this because I’m able to mingle with young people and keep my brain active,” he said. “This is such an excellent facility. These people could teach at any big Ivy League school, at any big university. It’s obvious they love to teach.”

“We don’t have to take the tests. We just get to enjoy learning,” Klaiman said.