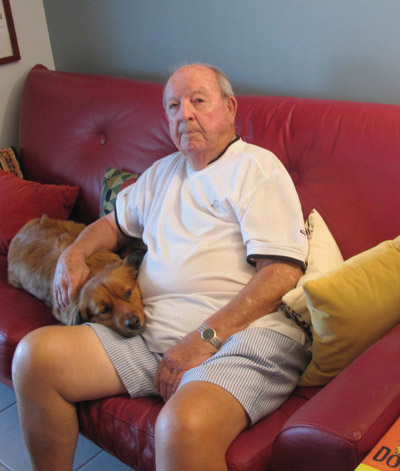 It was our former president, John F. Kennedy, who said, “Change is the law of life. And those who look only to the past or present are certain to miss the future.”

His parents set the tone early in his life. Goodman’s father was 12 when he stowed away on a ship that sailed from England to America. He felt limited by his family, who were Jewish and traditional. He wanted more, Goodman says. Working hard, he bought old petroleum drums, reconditioned them, then sold them to refineries. He became a patriot, loving his adopted country, serving in World War I. Goodman’s mother was Irish and worked hard raising their four boys, but could have worked in a factory for a time.

“She was a Rosy Riveter,” Goodman says, vernacular for an emancipated woman of that time.

The family worked together and played together, building a life in the hard times and the good times.

“We had a wonderful, wonderful childhood,” Goodman remembers, “picking tomatoes and caddying [on the golf courses].”

Goodman did the usual things: He served in World War II as a Navy Seabee with a construction battalion. Goodman said he never saw action, but he was involved in the cleanup at Okinawa.

Returning home, he worked with his father hosting wrestling matches at a kosher hotel and casino in Spring Valley, N.Y.

“We formed a corporation,” Goodman says. “If we had television there, we would have made it. Wrestling was the big thing on television in those days.”

Goodman went on to create a career in the carpet and tile business. He acknowleges that he was a “man about town,” not marrying until he was 40 years old. He bought a yellow Mercury convertible from a car dealership, after he’d done a tile job for them. There is no doubt he enjoyed that convertible. There was a sparkle in his eye when Goodman told me about his adventures as a young man.

It appears that Goodman never turned down an opportunity, or a fresh challenge.

A local restaurant owner in Nanuet, N.Y., needed a new partner and asked Goodman: “Do you know a young man who could partner with me?”

Goodman answered, “What about me?”

He had modest means, he said, at that point in his life, but his parents believed in him. They mortgaged their home and gave  him $35,000.

“That was a gamble,” Goodman says, so many years later.

Born was Bill Goodman’s Restaurant, the home of the “Ginerous Martini.” It was a fine dining establishment with a crystal chandelier and fine linens on the tables, a well-stocked bar and fine cuisine offered on the menu, which advertised the house specialty as veal parmigiano for $1.75. The most expensive item on the menu was Live Maine Lobster with crabmeat for $6.75, which included an appetizer, soup and dessert. He had the restaurant from 1958 to 1964.

The restaurant became a family affair.

His father ended up being Goodman’s “salad man,” and his brothers would do everything from washing dishes in an emergency to tending the bar.

Not long after, Goodman met a woman 10 years younger than he when she came to the restaurant one day. The woman, Kathy, became his wife and ended up working in the restaurant herself as the hostess.

“I was getting more particular,” Goodman admits, “and less desirable.”

One day, the bartender became ill and Kathy called her husband, who was away from the restaurant. “What do I do?” she asked.

“Get behind the bar,” Goodman said. “You can only make one drink at a time and they will tell you how to make it.”

Goodman moved to Sun City Center six or seven years ago and has been volunteering ever since. He began helping the children with their reading lessons at the Redlands Christian Migrant Academy, just outside Sun City Center. 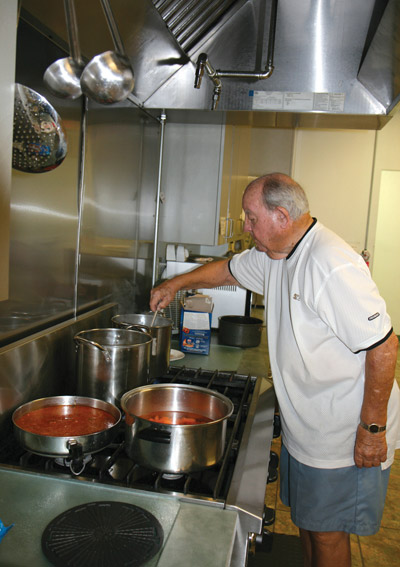 Bill Goodman makes lunch once or twice a month for volunteers at the Sun City Center Emergency Squad. He recently received the “2014 Certificate of Grateful Appreciation” award from the squad.
Carol MacAlister photo.

He has been making lunch once or twice a month at the Sun City Center Emergency Squad, where he recently received the “2014 Certificate of Grateful Appreciation” award.

“They have squads. I am on the No. 6 squad,” Goodman says. “You get a budget and do the shopping. Every day there is a menu. They work 12-hour shifts. About 11:30, I get the food ready and just about the time they would eat, the phone rings and there is an emergency! They are so appreciative.”

The volunteers can expect him to make anything from kielbasa sausage and peppers to Hawaiian pork chops.

“Our cooks spend many hours planning, shopping and preparing our meals,” Robin Watt of SCC Emergency Squad says of Goodman. “They are important members of our teams, as they allow the ambulance crews to focus on patient needs and not worry about burning lunch! Bill has been a wonderful volunteer and we appreciate the many great meals he has made for us.”

Of course, a story about Bill Goodman would not be complete if you didn’t talk about Cookie, a Dalmatian owned by Goodman. Cookie passed away.

Goodman had found her in Sarasota when he was visiting his niece.

“That Dalmatian looked at me and I could see Cookie loved me,” Goodman says.

It is easy to see how beloved Cookie was to him, though now he has Emma to keep him company.

Goodman still visits the local dog park twice a day. Now he brings Emma instead of Cookie. But Fridays are special. It started back when he still had Cookie. In her honor, he would bake cookies to bring to the dog park on Fridays — and he continues today. Each Friday there’s a small gathering of dog owners who wait to sample the cookies he brings with him, earning him the sobriquet Cookie Bill. I can personally say they are very, very good cookies that he bakes for his Fridays at the dog park.

“I am almost a phenomenon,” Goodman says about his longevity. “I take very little medication. I have no pain or aches. I will be 92 in February, if all goes according to plan.”

I can see that sparkle in Goodman’s eyes again. They almost say, “A Mercury convertible might not be so bad, after all.”