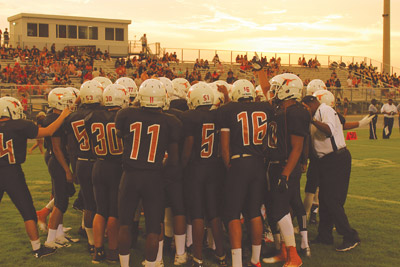 Lennard hosts Chamberlain Sept. 12 in an attempt to extend the team’s best-ever start to a season. Jacob Council photo.

For the first time in school history, the Lennard Longhorns are 2-0 to start a season after a tight 20-17 victory over King High.

But while pleased with the progress his team has made, coach Keith Chattin, now in his third year leading the team, is not getting carried away.

“You have to be happy, but you also have to keep it in perspective,” Chattin said. “It’s only two games but it’s a better feeling than we have had in the past.”

King, a fast and aggressive team, reminded Chattin of his own squad. “They play a lot like us. It was just a great high-school game. As I told the King coach at the end of the game, either team could have won,” Chattin said. “It was just a real hard-fought mental contest, and we just pulled it out at the end.” 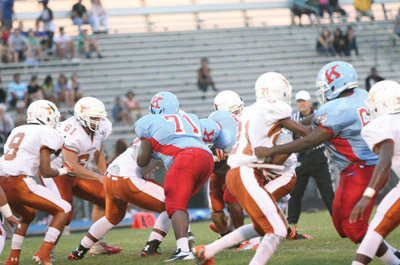 Lennard came from behind to beat King in a game either team could have won.

Chattin was impressed that the Longhorns won despite facing a tough opponent that gave his team all they could handle. Having not lost a game so far in 2014 — Lennard also won its spring jamboree game against East Bay earlier this year and trounced St. Pete Catholic in a preseason game — the King game was a real test of the team’s character, Chattin said.

“I don’t want to sound cocky, but we have not had to face any real adversity so far. But in this game we went behind, and the team really showed their mental toughness and backbone. In the previous years that I have been here, we would have never pulled that game out, but this team has a little moxie about them and even on the sidelines their heads were never down and they never complained.”

The team now understands they can not only win a blowout game as they did against St. Pete but also win close games, Chattin said. “Now they have that confidence. We are not finished by any means, there are still lots of things to clean up, but you have to be proud of them the way they responded the last couple of weeks.”

With a 100 percent record under their belt and a raucous home crowd promised for their next game, against Chamberlain, the Longhorns have never been in a better position.

“As long as we are grounded and motivated, we have a chance,” Chattin said. “Chamberlain has some athletes to match up against our athletes, and whereas in the past two years they ran the ball, now they throw it a lot more, so they are going to test our defense. It will be a hard-fought contest.” 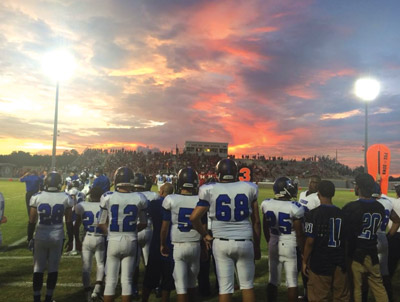 Lennard came from behind to beat King in a game either team could have won.

East Bay, who was looking to rebound after losing to rivals Lennard in their previous game, beat out another rival, Riverview, in last week’s matchup.

“The defense on both teams played hard in a hard-fought game,” said coach Frank LaRosa. “There were some big plays that were made, but we just got that one more point.”

“After that, it just became a game of big plays by both teams,” LaRosa said.

With just a few minutes left, East Bay tried a field goal, but it was blocked, and except for a last-ditch tackle, Riverview almost converted the block into a go-ahead touchdown.

The win was some solace for East Bay after the previous week’s disappointing loss to Lennard.

Alonso is up next for LaRosa’s team. “Alonso is a very talented playoff-type team, and they are very well coached. They beat us pretty bad last year at home but had some key guys injured then. It is going to take a very well-executed game from us to get a win.”