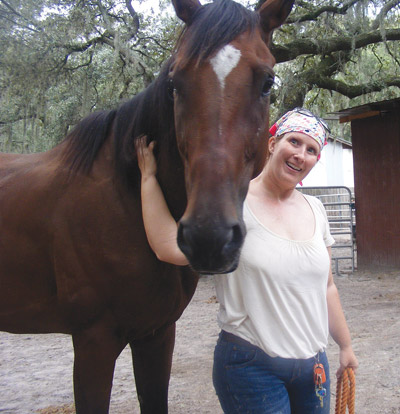 Tara Knapp shows off Mason, a rescue who was due to be slaughtered the day he was rescued. He is the great-great-grandson of the famed racehorse Secretariat, but Mason was injured and could not race anymore. Penny Fletcher photo.

At times, rain and lightning spooked a few of the horses. Robert Walker, general manager of Sonny’s Barbecue in Brandon, held down the top of the food tent when the wind gained strength.

Still, “Shave 4 Life” not only met its goal of $1,000 but exceeded it with a final profit of $1,300, which will be split between the two hosting organizations: RVR Horse Rescue in Riverview and Relay for Life team “Smoke out Cancer.”

Despite the rain Saturday, Aug. 23, the two nonprofit organizations stayed the course in good humor at the horse rescue on Hayes Clan Road in eastern Riverview as the wind blew and the hair flew.

The hair loss was deliberate. Shawn Jayroe cut hair and shaved heads in support of those going through medical treatments such as chemotherapy that cause  them to lose their hair. Jayroe is a stylist at Hair Perfection and also is founder and president of the horse rescue. 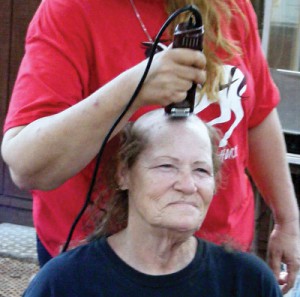 Shawn Jayroe shaves Sandy Johnson. Shawn is a professional stylist and the two women are the co-founders of RVR Horse Rescue in Riverview. Penny Fletcher photo.

Sonny’s restaurant donated and dished out food and drinks before the event as horse jewelry was sold, tours of the ranch were given, desserts by LeRoy Vanek were consumed and Memorial Stars were sold for $1 each by Donna Lee Fore, founder and president of the Riverview Woman’s Club and current candidate for State Representative in the Florida House seat for District 59.

Constance Daniels, candidate for Circuit Court Judge in Group 34, was also on hand to talk with eventgoers.

Before the haircutting began, Tara Knapp, a volunteer at RVR in charge of fundraising, showed off some of the horses, including her own pride, Mason, the great-great-grandson of the famed racehorse Secretariat.

“Mason was injured and couldn’t race anymore and was headed to slaughter the very day we found him,” Knapp said. She said she and Mason took to each other immediately, and she gave him a home.

Then there was Dominick the donkey. Dominick walks in front of his blind friend, a horse named Charity, paving the way and warding off trouble so Charity won’t get hurt.

“Donkeys are wonderful herders,” Knapp said. She also told how many of the horses were rescued and talked about the wild herd of 25 or 30 loose in the acreage behind the rescue that often shows up for food. 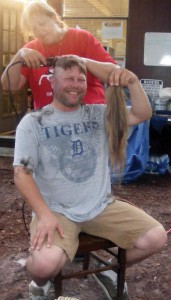 Chris Cowell loses his ponytail for the cause. Penny Fletcher photos.

When the haircutting began, Chris Cowell was the first to hit the chair, losing a good 12 inches of a ponytail. He was followed by Dawn Radomski of Tampa, who got a close cut in memory of her mother Mary Breen, who died of cancer in 2009. Sandy Johnson, co-founder of RVR, got shaved. And Stefanie Powell started with hair halfway down her back. After her cut, her hair reached to just above the shoulders.

Hand-painted wine glasses made by artist Brenda Scott were auctioned following all the hair cutting.

The event was a joint effort between all the members of the Relay for Life team and RVR volunteers.

To find out about the rescue, to volunteer or to adopt a horse, visit http://rvrhorserescue.org.

Support for team Smoke out Cancer may be offered by emailing 1specldy@bellsouth.net. 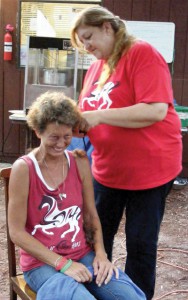 Dawn Radomski of Tampa gets a shave in memory of her mother Mary Breen, who died in 2009. 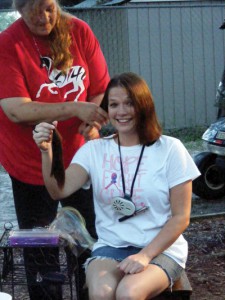 Stefanie Powell gets a short haircut in order to donate her hair and also to benefit Relay for Life in support of her mother, Karen Lewendowski, who is a survivor and has been the keynote motivational speaker at South County’s relay for several years.