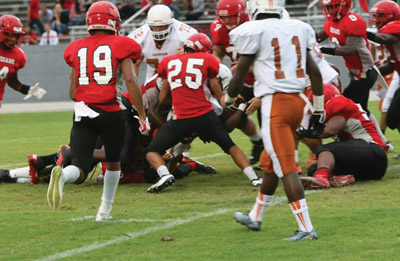 East Bay turned the ball over five times in the loss to Lennard.

It was a while coming for the Lennard Longhorns, but that made the 28-7 victory all the sweeter for coach Keith Chattin.

Chattin, in his third year as Lennard’s coach, had never beaten the school’s bitter rivals East Bay before but confessed to not even knowing the score of the game until the final whistle, so focused was he on each down.

“I didn’t even know the score until the game was over,” Chattin said. “East Bay is a very good team and very well coached, so I just had to keep my mindset on the game and running the game. I knew we were ahead, I just didn’t know what the score was.

East Bay, a team in a rebuilding year after losing 24 seniors to graduation in May, left lamenting critical errors.

“We had to battle our own mistakes and also a rival,” said coach Frank LaRosa, who led East Bay to an impressive 8-4 record and a playoff appearance last season. “We didn’t give ourselves a chance to win. We had five turnovers and some blown assignments on defense. We killed ourselves.”

There will be little respite for East Bay. Rival Riverview is up next for LaRosa’s crew.

“The kids are excited about that one because it’s another rivalry game, another border war,” LaRosa said. “Riverview is a very well-coached team but hopefully having that extra game under our belt (Riverview had a bye last week) will also help us physically. I just want to play a clean game and execute and give ourselves a chance to win. We will take a look at the film [from the Lennard loss] and see the miscues and see what we can do to fix those.”

A week after thumping St. Pete Catholic 57-0, Chattin predicted the “most physical game of the season” against East Bay, and his prediction rang true with both teams battling in a matchup that didn’t disappoint fans who filled both stands at East Bay.

“I am happy for the kids,” Chattin said. “I told them to enjoy it. They worked hard and they deserved it. Now, a lot of people are talking about them, and all that hard work is finally paying off.”

Next up for Lennard is an away game at King High. Chattin said King “reminds me a lot of us. We run a similar offense with speed and some athletes, and we both play at a fast tempo. I am not trying to be cocky but I like our chances because I know we will prepare and have a good week of practice since we didn’t get anyone banged up Friday [against East Bay] so we are in good shape.”

Chattin, who has always preached a three-year plan at Lennard, has no problem with expectations from his team that went 1-9 last season.

“We don’t even put up a schedule in the weight room or locker room,” he said. “We always say it’s a one-game season every week. Last week is over, so now everyone knows our focus is on King. This success has come pretty quickly for these kids in the last month, so we will talk about it in our morning meetings before practice about taking it a day at a time and we will be fine.” 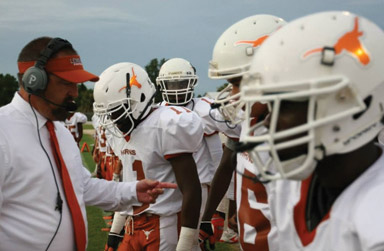 Lennard coach Keith Chattin, above, doesn’t want his players thinking too far ahead, reminding them that each game is “a one-game season.”