Florida residents to save $40 million, thanks to efforts of locals 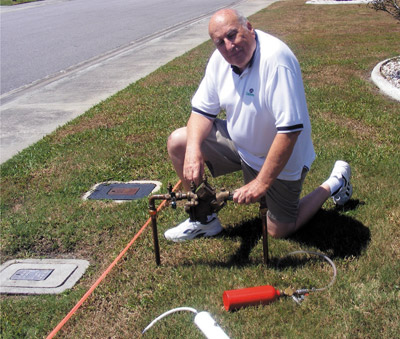 Dave Brown led the charge with help from all over South County, and now he’s receiving thank-you letters from all over the state.

“I’ve gotten letters from an HOA in Valrico and Valencia Lakes, and from as far away as Miami,” Brown said in an interview Aug. 28.

But Brown didn’t take on the issue of “backflow valves” for thanks, or even to save the county and state money.  In the beginning, he fought against the way Hillsborough County’s policy for backflow valves read because he said it was unsafe.

A backflow valve is an outdoor valve that is used for the purpose of preventing wells, lake or pond water from getting into the drinking water supply where homes have irrigation piping from them as well as from the county water supply. The intent is to keep the two water supplies separate.

As of 2009, when Brown first began his crusade, the state had very inflexible regulations that required valves that cost between $500 and $800 to be installed for commercial and residential properties alike; and required expensive annual testing and maintenance.

While residents of Sun City Center and Apollo Beach were complaining the valves were expensive and unsightly, Brown was stressing that they also were dangerous.

His argument was that the way the valves were constructed made them a target for deliberate contamination of residents’ drinking water.

So in 2009, Brown led a campaign to change the regulations but soon found himself dealing with the State of Florida as well as Hillsborough County.

The Florida Department of Environmental Regulation is responsible for setting the overall regulations for safety, but not for how each county implements those regulations.

For six years Brown and a group of local residents have been working with both the county and state to get the regulations changed.

Finally, on June 5 this year, the state enacted its new regulations for 24 different categories, with one category for residential dwellings and 23 others for various industries from dairy to hospitals and labs to metal manufacturing.

Regulations now allow residents to have a $30 dual-check valve that can be attached directly to their water meter and will be owned and maintained by the water utility. Commercial properties, however, will need to install more expensive systems to prevent extreme pressure that could cause bursting or backflow into the public water supply.

According to a DEP report, savings for Florida residents total $40 million a year. With more than six  percent of the state’s population, Hillsborough County residents account for $2.5 million of that savings each year.

Now that state regulations are in place, Hillsborough County can make its new regulations. It is using its new eight-member Cross Connection and Backflow Board and three specialists who are not on the board — Bob Tisdale, Scott May and attorney Ed Helvenston — to help interpret the state regulations and write a local ordinance. The board is composed of four members from the county’s water, plumbing, building services and health departments; an attorney; a plumber; an irrigation installer; and Brown, who is its citizen representative.

Information about the board may be found at www.hillsboroughcounty.org/index.aspx?nid=141.

Since the beginning of his actions to improve safety and save residents money, Brown has earned two prestigious awards: Hillsborough County’s Moral Courage Award in 2008 and the Florida Senate Medallion Award of Excellence in 2009.

“Residents from Sun City Center and Apollo Beach and many others from all over South County were with me in this and helped to accomplish it,” Brown said. “The Observer News has been extremely instrumental in helping with this, following it in detail. The county commissioners and state representatives making the decisions have been reading the continuing story as recorded, and I feel the excellent news coverage they’ve given it helped make it happen.”

At last, the final steps for change are in motion.

An ordinance will be presented to the Board by early November and, when reviewed and tentatively approved, will go to the County Commission in 2015 to be set in stone, as each county is still responsible for implementing state regulations in its own way as long as all state regulations are met.