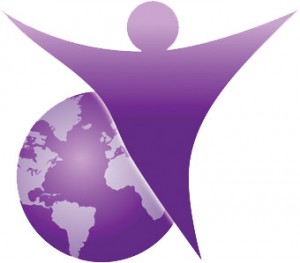 The Purple Angel has become the international symbol for all types of dementia.

Imagine a loved one rushed to the hospital after a fall in the home where she still lives by herself. Let’s call her Mary. Imagine that Mary is your mother and has been suffering from dementia for about two years. Mary can still make her breakfast in the morning and wash her clothes. Mary is unable to drive. What if she became lost? It’s nice to have a day out for food shopping, or find a new pair of shoes, so her daughter picks her up one day a week, her son the next week.

One day Mary falls in the kitchen and injures herself. Mary is able to reach her children by phone. But she does not remember her daughter’s or son’s number. Unfortunately, because she is frightened and in pain, she cannot remember to call 9-1-1, either. As she struggles to remember a phone number, any phone number, she accidentally dials zero and the operator is able to call emergency medical dispatch to get Mary help.

Paramedics arrive at the front door, which is standing open. These first responders take Mary to the emergency room. The doctor, or the nurse, approaches Mary’s bed and begins firing questions at her. What is your name? Is your family here locally? What is their phone number? What medications are you on? Are you allergic to any medications? What is your address?

Mary is a dementia patient — and they don’t know that. There is no way they can know she may not give them the right information on her medication, or allergies. Mary is confused, and the beeping medical equipment and the barrage of now-bewildering questions make her more and more confused.

“A dementia patient has been admitted to the hospital. Medical staff is asking them questions about their medications,” says Debbie Caneen, SunTowers retirement community director of admissions, “when they may not even know what they had for breakfast that morning.”

Gary Joseph LeBlanc, “Common Sense Caregiving” writer and activist, had three separate hospital experiences over a period of time with his father, who was diagnosed with Alzheimer’s disease. Then it dawned on him, LeBlanc said, that something needed to be done. LeBlanc was shocked by how little was known about handling the patients with dementia. He created the Alzheimer’s/Dementia Hospital Wristband Project, so that dementia patients could wear a specially designed wristband to alert others.

“Education is without a doubt, the most important facet of this program,” LeBlanc wrote in an email to a number of health-care professionals in the Tampa Bay region. “It is crucial to realize that one of the symptoms surrounding dementia is poor decision making … It is important to understand that these wristbands only stand for the patient being at risk of cognitive impairment. They do not stand for a diagnosis. They are similar to the yellow wristbands placed on patients that are at a risk for falling. They are meant to alert the staff to take precautionary measures.”

Upon admission, there will be a dementia screening in hopes of identifying cognitive impairment, and a Purple Angel logo can be attached to the patient’s wristband. This has become the international symbol for all types of dementia.

A magnetized Purple Angel can also be placed on the door frame, and hospital staff and the community first responders will receive dementia-care training. A “sitter” will be encouraged as standard practice, so families can take much-needed breaks.

LeBlanc says that after running the wristband education project at the hospital for the past six months, Bayfront Brooksville staff say that they do not have to use restraints on their dementia patients anymore, that there is no need for a sitter, and health-care professionals have a better way to communicate with dementia patients. 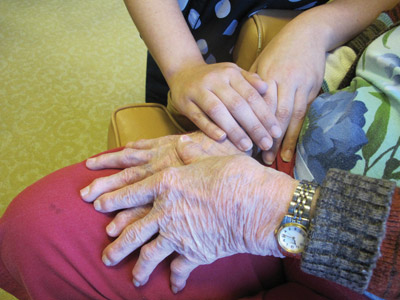 “It is in their routines that they have their safety,” Caneen says. “The wristband is not a diagnosis, it’s a precaution.”

Caneen has been arranging caregiver symposiums annually. This year, after meeting with LeBlanc, she decided to have a dementia wristband education symposium instead.

The Dementia/Alzheimer’s Hospital Wristband Education Project will be held in Sun City Center at the SCC Community Hall this year instead of the caregiver symposium, Caneen said. It will take place from 9 a.m. to noon on Tuesday, Oct. 28, and will provide needed education and information to the professional health-care community at large. Health-care workers can get credit for attending if they register by calling 813-633-0561. This educational symposium is not open to the public, but to health-care professionals in the area. They will receive information that will be invaluable in meeting the special medical needs of residents having Alzheimer’s disease and other dementia-related illnesses.