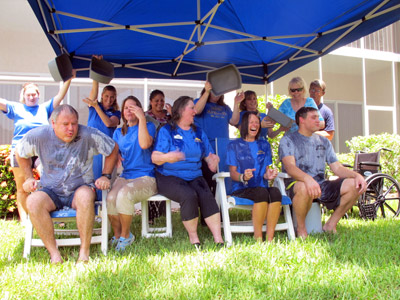 Nancy Anspaugh said she began having pains in her left leg and her hands in January 2013. Uncertain about exactly what was wrong with her, doctors eliminated the possibilities one by one.

It wasn’t until she was being treated by her gastroenterologist for another ailment that doctors determined she had ALS, or Lou Gehrig’s disease. It is difficult to diagnose.

The disease is not contagious.

Some 5,600 people are diagnosed with ALS in this country each year. The average life expectancy after diagnosis is two to five years, though 20 percent of those diagnosed live longer than five years.

Nancy Anspaugh became a resident at SunTowers Retirement Community on March 10, with her husband Jack, though they have been living in Sun City Center for 18 years. It was getting hard for Jack to help his wife with her increasing disabilities. And then he had a bout with pneumonia, which put him in the hospital.

With their daughter Karen living in San Diego and their son Steven in Michigan, the Anspaughs decided that SunTowers was a good choice, particularly because of its physical therapy department.

“In the last test she had,” Jack said, “her lung capacity had increased.”

Nancy also goes to the University of South Florida clinic for physical and occupational therapy and support. She and Jack spend three hours there every time they go and are seen by a number of medical professionals, including a neurologist, though Nancy can call her own medical doctor anytime she wants.

“What we’re doing is treating the symptoms,” Nancy says. “I love to go to physical therapy, and there is a social part I like, too.”

“She is doing very good and is a hard worker,” says SunTowers physical therapist Ellen Cirello. “We are trying to keep her walking.”

A registered nurse on the SunTowers staff, Cristine Martinez was responsible for issuing an ALS Ice Bucket Challenge to administrators.

“I started at the top,” Martinez said about starting an ALS Ice Bucket Challenge that took place  at SunTowers last week. 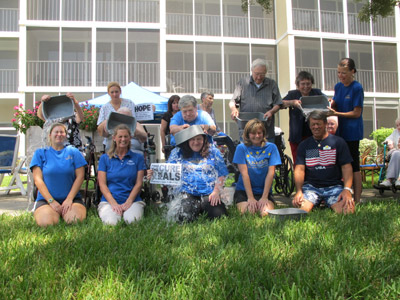 “We have all worked with ALS patients before,” Vicki Kosky, SunTowers director of therapy, said. “We know the effect it can cause.”

The Ice Bucket Challenge dares participants to have a bucket of ice poured on their head to raise awareness for ALS. Participants then challenge people or businesses to donate money for ALS research. The donation must be contributed within 24 hours and often the challenge is videotaped.

According to Wikipedia, the ALS Ice Bucket Challenge has gone “viral” on social media and has become a pop-culture phenomenon this year.

“Residents of SunTowers lined up to witness the dousing by the lake. As each participant offered the name of the individual who they were then challenging to take the plunge, I was surprised to hear my name! Needless to say, I was happy to take my place under the ice. The event raised money for a great cause, our residents had a terrific time, and, well … my clothes will dry eventually.”

SunTowers Director of Nursing Lisa Stewart had previously worked with ALS patients at a hospice. She said these patients will always have a special place in her heart, especially because of an ALS patient she worked with in hospice.

“I think it’s to show our support and acknowledge our support,” Stewart said about accepting the icy challenge.

Because of Nancy’s devotion to making her body strong and working so hard at her physical therapy, Jessica Roca, assistant director of physical therapy at SunTowers, said they decided they wanted to join the SunTowers administrators who had been challenged.

“The physical therapy department was not formally challenged,” Roca said, “but we wanted to support Nancy.”

At the end of the event, Nancy Anspaugh was asked how she felt to be honored in a very specific way during the Ice Bucket Challenge.

“It was heartwarming,” Nancy Anspaugh said. “It made me feel good.” 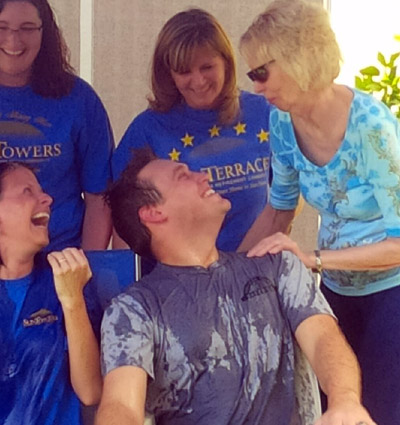