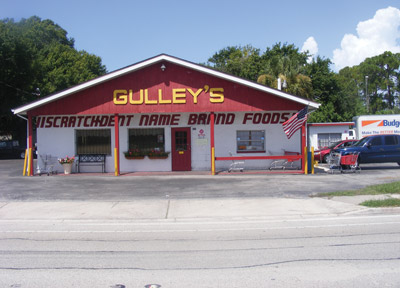 Just about anyone who’s been around the South County area in the last 30 years knows about the chain of Gulley’s Discount Scratch & Dent Name Brand Grocery stores. Gulley’s has had stores in various areas of South County — on 50th Street in Tampa, and in Plant City, Bradenton and Lakeland. Seven of them, in fact, plus a farm-and-feed store in Riverview.

But it all started in Ruskin —  quite by accident, which is a story that, until now, no one but Jack Gulley and his family has known.

After growing up in Indiana, Gulley entered the Marine Corps and fought in Korea.

Following that, he had a plethora of jobs, was a basketball referee for 17 years and attended the Reich School of Auctioneering in Mason City, Iowa.

“I sold cattle and automobiles and, after a while, I ended up buying the local Chevy dealership,” he said in an interview Aug. 20 at his Ruskin store. During that time he also bought a leasing company in Florida.

In 1984, he and his late wife Carol, son Dennis and daughter Linda moved to South County from Camden, Ohio, and operated a small Chevrolet dealership at 720 U.S. 41, where the Ruskin Gulley’s now stands. They chose Florida because that’s where his leasing company was located.

“I got in the grocery business quite by accident,” Gulley said. “One day I was talking to a friend in the grocery business and he was telling me about all the things that got wasted. If one bag in a package is split open during delivery, or some cans in a crate dented, the whole [package or] crate is considered damaged goods and tossed.

“I knew there was a market for these things at a discount rate,” Gulley said, “that people needed to be able to buy them.”

One day a sign appeared in the building next to the small office on the Chevy lot. 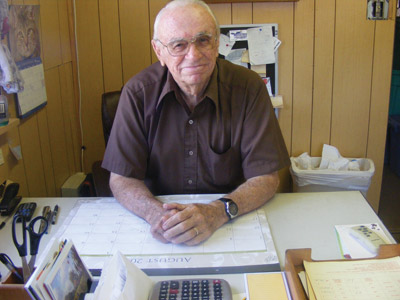 Jack Gulley got into the grocery business by accident. Now, after owning seven stores in the area, he has closed all but the original store located at 720 U.S. 41 in Ruskin. He is semi-retired, and the story of how he got into the business is one that, until now, had never been told. Penny Fletcher Photo.

And that’s how the chain of Gulley’s Discount Scratch & Dent Name Brand Grocery stores was born.

There was so much business, Gulley said, that he finally got to the point where local suppliers couldn’t keep up with demand and he had to start going out of state as far as South Carolina and New Jersey to keep his shelves filled.

One after another, seven stores were opened within a 35-mile radius of the original Ruskin store. Now, all Gulley stores but the one in Ruskin have been closed, as Gulley, now 85, is semi-retired and living in Freedom Plaza in Sun City Center.

Gulley’s daughter Linda Arlington takes care of the paperwork, ordering and deposits, while manager Kathy Davis, who has been with Gulley’s for 28 years, manages everyday operations, pricing and staff.

Things fly off the shelves so fast Gulley has to have warehouse space and a place to park his four semi trucks; that’s at the former Kmart building on the corner of U.S. 41 and 19th Avenue.

Gulley’s loyal customers come in brand-new Cadillacs and rusted-out pickup trucks; on foot, bicycles and in SUVs. No matter what rung of the economic ladder they’re on, once they enter the store, they’re all equal: they’re there for a bargain.

“I’ve been coming here as long as Jack’s been open,” said Kenny Davis.

Ellie Kennedy of Ruskin says she has been there almost every week the entire 30 years the store has been open.

Mary Ellen Gray was initiating her mother Delores Gabbert in what’s available at Gulley’s at discount prices at the time of the interview leading to this story.

Gabbert, a recent widow, now lives with Gray in Ruskin.

“I had to show her this store, it’s a favorite place of mine,” Gray said.

No special celebration for Gulley is planned on the day of his 30th anniversary. But those who remember his opening in 1984 and others who have become loyal customers since, said they just might stop by for a special visit.

Eat a box lunch Oct. 12 and feed a needy family