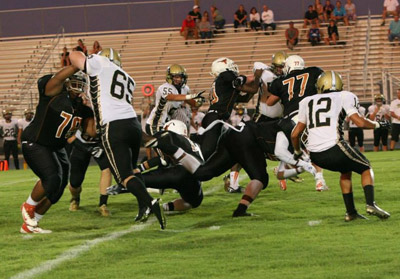 Lennard and Riverview high schools both celebrated big wins on the gridiron Friday. East Bay could have made it a trifecta, losing by only a field goal to Chamberlain, 14-11.

Lennard put up the biggest numbers of the weekend, stomping St. Pete Catholic, 57-0, a morale-boosting win for the Longhorns ahead of the Friday, Aug. 29 game against local rival East Bay.

Lennard High football coach Keith Chattin said, “We got what we needed to get out of it. We got the kids a lot of reps and we had a lot of freshmen play and we got a few surprises because we found out some of the freshmen could actually play, so we are in good shape for this weekend.”

With “persistent consistency,” Chattin’s mantra, he was pleased with how the squad played. “As long as we can do that, I think we have a chance to be pretty good.”

In his third season as head coach, Chattin has been preaching that the third year is the year the effect of the work in the weight room will start to pay off, and that’s what he is now seeing on the field. “At one point in the second quarter, the other team was bending over and just tired and I told my kids: ‘Look at those kids, now this is what those summer workouts are about.’ We are now seeing the fruits of our labor.”

Chattin is expecting a physical game against East Bay on Friday. “They are our big rival and they have beaten us the last two years I have been here, so I expect it will be intense on both sides and probably the most physical game we will play all season,” he said. “But we are going to go there with the expectation to win, not to be cocky, but if we do what we can we should be all right.”

After posting a 2-8 record last season — a deceptive number because Riverview led in the fourth quarter in at least three of those losing efforts — coach Mike Thornton was glad to get off to a winning start this year, beating Leto 35-12.

“The thing I was most proud of was that we got out of the gate early in this game and had a great start,” said Thornton, whose Sharks scored on their first two possessions of the game. Those early scores “gave us some confidence and a nice cushion to be able to make a mistake here or there and not have that pressure to play mistake-free and still hold the lead,” he said.

The home-field advantage also played a part in the victory, Thornton said.

“It’s always nice to play at home, to have the home support and avoid the stress of travel and riding the bus. Leto is a long way away, so it was good to be at home just to save on that long bus trip.”

The victory was also a good learning experience for Riverview players, Thornton said. “Our kids found out what they were going to be asked to do and how much playing time some of them are going to get.”

With several Sharks playing offense and defense, no easy task on a humid August night in Florida, Thornton said he was glad to see how his players handled the situation.

“There’s a big difference between practice and a game, so this was a great opportunity for them to be in a game situation and see how tired they were actually going to be and what they would have to do with taking care of their body during the week with hydration and those types of things. It was a great learning experience from the football part of it, but also great for the guys to see how much would be demanded of them and what they would feel like during the course of the game,” Thornton said.

With a bye week coming and two weeks to prepare for their Sept. 5 game at East Bay, players are feeling good, the Riverview coach said.

“We are going to spend that time fixing our mistakes and trying to get in shape and hopefully we stay healthy and are ready to go.”