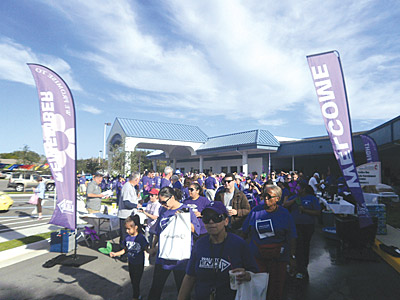 Someone we love begins to experience memory loss, or may have trouble following a recipe for the first time. Or they have forgotten how to drive to the market, or they lose track of dates, have difficulty reading, stop in the middle of a conversation unable to continue, start losing their car keys, pay less attention to their grooming, may withdraw from a social or work life, or become depressed, or confused for no apparent reason.

They could be showing the 10 symptoms of beginning Alzheimer’s disease, or dementia.

Dementia is a general catchall term that demonstrates a person’s mental ability decline, which is interfering with their daily life. Dementia is not a specific disease. It describes a wide range of symptoms.

Alzheimer’s disease is the most common form of dementia and accounts for some 60 to 80 percent of dementia cases. Vascular dementia, which occurs after a stroke, is the second-most-common dementia type.

Alzheimer’s disease is not a normal part of aging, though most people who get it are older than 65, but it can begin as early as age 40. It impacts memory, thinking and behavior, and gets worse over time.

The cost of care for those with Alzheimer’s and other dementias is estimated to total $214 billion in 2014, increasing to $1.2 trillion by mid-century, according to Natalie Kelly of the Alzheimer’s Association’s Florida Gulf Coast Chapter. Nearly one-third of all seniors who die each year has Alzheimer’s or another dementia, Kelly says.

What is important to understand about the Alzheimer’s Association is that it is the global leader in Alzheimer’s advocacy, research and support. It provides a support system for those affected by Alzheimer’s disease or a related disorder and to their caregivers through patient and family services, education, advocacy and research.

“Our priority services include training and community awareness. We are excited to participate with the Alzheimer’s/Dementia Hospital Wristband Education program by training hospital personnel and first responders,” said Gloria J. T. Smith, Florida Gulf Coast Chapter president and CEO. “This groundbreaking program ensures the highest quality of care for an individual with Alzheimer’s disease when  admitted to a hospital that supports the Alzheimer’s/Dementia Hospital Wristband Education program.”

One service offered by Alzheimer’s Association here locally through the Gulf Coast Chapter is a 24/7 Helpline available by dialing 800-272-3900. If anyone has questions about Alzheimer’s disease or memory loss, or how the association can help, this is the place to call. They also can give caregiving tips and respite-care options. And they can give referrals in the local communities.

Caregiver’s Day Out is a planned activity once a year organized by the local chapters of Alzheimer’s Association. Respite care is provided by local donors. It could be a cruise, a ballgame, or any other activity where area caregivers have the day off together.

The Memory Mobile service is an outreach service that travels to low-income, rural or isolated groups, providing education, support and prevention services.

Other services include: Alzheimer’s Association TrialMatch®, which helps people find clinical studies;  Alzheimer’s Navigator®, a free online tool that provides individuals with Alzheimer’s and their caregivers step-by-step guidance and customized action plans; and an online Community Resource Finder providing instant access to community resources and services.
Alzheimer’s Association is a sponsor of the 2014 Sun City Center

Gary Joseph LeBlanc is the founder of the Alzheimer’s/Dementia Hospital Wristband Education Project and weekly columnist for “Common Sense Caregiving.” LeBlanc will provide the education for the Oct. 28 event.

To help provide these free services to individuals and families dealing with Alzheimer’s, the Florida Gulf Coast Chapter hosts its annual Walk to End Alzheimer’s®. In Sun City Center, the Walk to End Alzheimer’s is scheduled for Saturday, Oct. 18, at the United Methodist Church, 1210 W. Del Webb Blvd. Registration begins at 9 a.m. and the walk begins at 10 a.m. For more information, call Tiffany Kane at 727-578-2558, or email walk@alzflgulf.org. You can also go to their website at alz.org/walk. The Florida Gulf Coast Chapter is at 14010 Roosevelt Avenue, Suite 709, Clearwater, FL 33762.