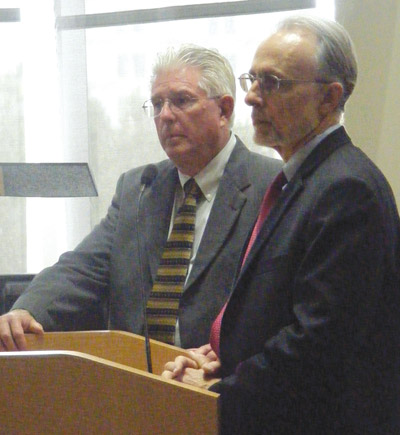 Consultant Herb Marlowe, left, and Hillsborough County Administrator Mike Merrill listen to comments from the audience Aug. 12 during a meeting to hear the progress of the Transportation Plan for Economic Development. Penny Fletcher photo.

With growth, industry attraction and eco-tourism all taking center stage on South County’s agenda, new studies are being done to show exactly what problems now exist and how to best eliminate them.

County Commissioners received a detailed briefing from consultant Herb Marlowe and County Administrator Mike Merrill on Aug. 12 as to how public opinion polls and studies concerning transportation should be conducted.

Transportation studies for the area have been done before, but Mike Merrill, who has been administrator for about three years, said they were not successful enough to move forward because only “concepts” were shown to the public and not “exact choices” for the things they want and need.

Merrill and Marlow engaged all the commissioners in public discussion in front of a large audience in the Commission boardroom, followed by a Q & A period for residents who had signed up to speak.

“Phase One will be to ask the public what needs and values they have on specific points,” said Marlowe. “We want to engage the chambers [of commerce], trade associations and transportation interest groups as well as individuals to see that we reach all residents. It is a problem that those with busy lives and jobs and kids going to school can’t always get to meetings, so we have to find a way to see they are also represented by those we do speak with.”

The two concluded that the county has an obligation to find solutions to complex problems to help its residents.

“We must ensure that we deliver the exact same message no matter where in the county we speak,” said Merrill. “The residents must know what we propose and let us know what they think before we proceed.”

They spoke of an “aggressive” effort to get residents’ answers by beginning on Labor Day to go out into the streets and get comments and report back to the Commission again in late October or November with those ideas so a plan may be drafted.

Handouts of money spent and suggested spending (with things earmarked as already determined necessary) were delivered at the meeting, and all are available online at the government site, www.hillsboroughcounty.org under “transportation.”

After the first results of the study are given to the Commission, Phase Two will be to get an in-depth comparison and measuring of what the people have said.

“A mini survey will only be a start,” said Marlowe.

Commissioner Kevin Beckner got right to the core of the matter by asking if what Marlowe was saying meant categorizing exactly what the problems are, where they exist, and how they differ in different districts of the county.

“I feel it would be valuable to get someone in the private sector to engage the questions and answers,” Beckner said. “This is not in our area of expertise, and I feel we should have someone who knows exactly how to get the kind of specific answers we need to proceed.”

Marlowe suggested having public meetings where the people could text directly and results could be tallied right there. Meetings of this type have already been done on some projects in parts of Hillsborough County, including South County in 2013.

Some commissioners called attention to the fact that agencies other than theirs were in charge of projects like state-owned roadways, and that meant that the Florida Department of Transportation and developers would have to be engaged in the project as well.

“The cities will also have to be included in these talks,” Merrill said. There are three municipalities in Hillsborough County: Tampa, Temple Terrace and Plant City.

Merrill said he had been working on this project for the past 18 months.

A meeting will be held Friday, Aug. 22, at 9 a.m. at the County Center, 601 E. Kennedy Blvd., Tampa, to address transportation needs and issues for disadvantaged citizens. Commissioners will receive briefings on Medicaid nonemergency transportation changes.

Meanwhile, planners are gearing up to begin asking questions of residents and groups around Labor Day.

Observations: Behind the mask