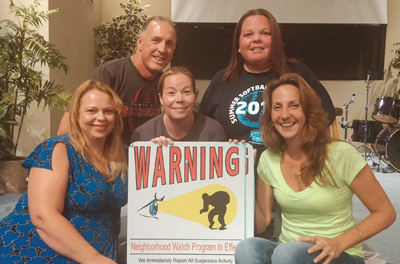 It was the purse that broke the camel’s back.

Kimberly Gill was about to pick up her granddaughter from an after-school program on U.S. 41 in Apollo Beach when she saw a police car in the parking lot. Thieves had just smashed out the window of a car and snatched a woman’s purse.

“It happened in the middle of the afternoon,” said a disgusted Gill.

Coming on the heels of the theft of bicycles from a poor family in her neighborhood and then her own bike being stolen, Gill decided she’d had enough.

The idea had been percolating for months, but after the purse was stolen, Gill decided she wasn’t waiting anymore: She would form a Neighborhood Watch group for Apollo Beach.

“I literally went home that afternoon [after the purse theft] and made the Facebook page,” said Gill, who lives in the F streets area of Apollo Beach — where all the streets begin with the letter F.

Since forming a Facebook group June 10 — Apollo Beach FL Neighborhood Watch — Gill has been overwhelmed by the response. The page already has more than 3,000 members, with residents regularly posting their own reports of local crime on the page.

“A lady just called this morning [Aug. 7] to report that someone had walked into her house and took her purse,” Gill said. “I am encouraging people to post these things because we [the community] can be the eyes and ears, and we might see these people walking down the road with your stuff.”

Hillsborough County Sheriff’s Deputies Diana Watson and Patrick McClean addressed the group, giving tips on how to spot and report suspicious activity, advising residents to take pictures of their valuables and write down serial numbers in case anything is stolen.

“Neighborhood Watch is an eyes and ears program,” Watson said. “We are here to help, but this is your program.”

Both deputies urged a “better safe than sorry” policy when it comes to calling the police non-emergency line, 813-247-8200, if there’s suspicious activity in the area. “Don’t be afraid to call,” Watson said.

Joslayn Villnave, a block captain in the new Neighborhood Watch, decided to join the group when she first moved into Apollo Beach.

“I have small children, and I saw some things that I didn’t like, and I want this area to be safe for them,” Villnave said. “I don’t want to see things in the neighborhood where bikes are getting stolen or children are being harassed. We moved here because it was a safe area; it’s a nice, family community, and I just want to keep it that way.”

Resident awareness will be a big part of keeping things that way, according to deputies McClean and Watson, resource deputies assigned to the Sheriff’s Office Neighborhood Watch program.

According to the deputies, there have been 101 incidents of thefts from vehicles in the Apollo Beach area in the last 12 months. In addition, 75 incidents of grand theft (thefts of at least $300), 52 residential burglaries and 40 incidents of vehicle theft were reported during the same period, with 20 bicycle thefts and 12 aggravated assaults.

“This is not about being a nosy neighbor; it’s about you being the eyes and ears for the community,” Watson said. “Don’t be afraid to call the Sheriff’s Office non-emergency line, 813-247-8200, if you see something suspicious. Of course, if it’s an emergency, call 911. But we would rather come out to find out it’s nothing than not be called and it’s something serious.”

While he has not personally been the victim of crime, Ralph (he did not want his last name used) is glad to see the program taking off in Apollo Beach.

“There have been some break-ins in our community for different sorts of things, so I think this is a good area if only just to raise awareness,” he said.

Kimberly Gill would like to see the idea spread throughout Apollo Beach, with Neighborhood Watch groups covering each community.

“My hope,” she said, “is that each community becomes responsible for its own community. For example, I can’t watch every street, but I can encourage my street to get involved, and as we communicate from community to community we are bridging the gap.”

“There’s so much we can do with this. We have elderly folks who are not able to care for the property [who] need help and empty houses that, left unattended, kids will hang out in. So although we can’t fix everything at once, we at least have a direction.”

Overall crime numbers are down in Florida as reported by The Observer News last month (“Florida summer crime” by Lia Martin, July 2), with the Florida Department of Law Enforcement reporting a 3.8 percent drop in overall offenses committed between 2012 and 2013.

But Gill said some areas, especially gated communities, may not be reporting crimes for fear of how it would impact property values. “For the sake of the property values, they tend not to let people know what is going on in a lot of these subdivisions,” she said.

Gill was pleased at the initial  turnout for the event. Her block captains plan to spread the word further and hope to pepper the area with Neighborhood Watch signs that will, they hope, deter criminals.

For more information on the group, visit the “Apollo Beach FL Neighborhood Watch” page on Facebook.