Nearly seven decades after victory, another kiss in Times Square 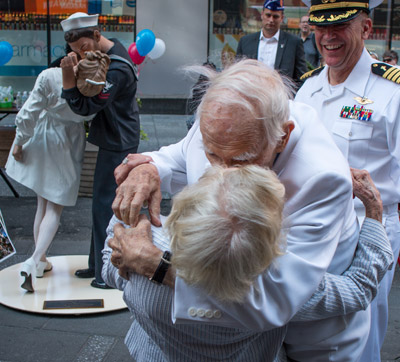 In Times Square on August 14, the 69th anniversary of the end of the war, World War II veteran Sydnor Thompson, 90, reenacted the famous kiss with his wife, Harriette, 91, both of Charlotte, N.C., in front of the just-unveiled sculpture of the kiss. Their son, U.S. Navy Chaplain Sydnor Thompson Jr., looked on with joy, along with a crowd of applauding onlookers.

The 1945 photo of the original kiss on what is known as VJ (Victory over Japan) Day is considered one of the most famous of the 20th century. It was taken by Life photographer Alfred Eisenstaedt of the celebration that swept the nation with the news of surrender and was most aptly summed up with a U.S. sailor spontaneously kissing a nurse in Times Square.

The reenactment was part of the unveiling of a six-foot sculpture of the kiss. The sculpture is titled “Unconditional Surrender” by artist Seward Johnson and the Sculpture Foundation. The event also kicked off a yearlong campaign by the groups Spirit of 45 and the United War Veterans Council to raise awareness, particularly among young people, of the contributions in both war and peace made by the Greatest Generation. The color guard for the event was provided by the U.S. Coast Guard. The Thompsons have been married for 67 years.

Afterward, other couples also got into the act.