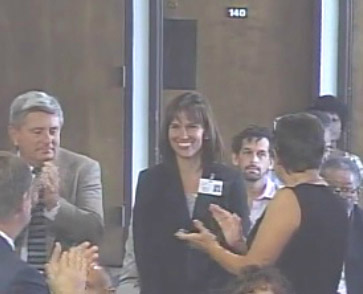 The new principal at Riverview High School is coming back to a school where she was mentored as a young math teacher.

“So really I am going back home,” said an ebullient Shotwell. “It really has come full circle.

Shotwell is replacing Bob Heilmann, a fixture at Riverview High since it opened. After the retirement of Riverview’s first principal, J. Vince Thompson, Heilmann became principal in January 2001.

“To be able to follow in the footsteps of the two previous principals, whom I consider mentors, is an honor, and I just want to carry on the traditions that they have set,” Shotwell said.

“Riverview is a great school that, from the first day it opened, really focused on building a connection with the community and school pride, and I think those characteristics are still there today. I am really looking forward to the opportunity.”

Parents and students will have a chance to meet the new principal at Riverview’s Open House from 5 to 8 p.m. tonight, Aug. 14.

Shotwell’s journey to Riverview began in 1995 at the University of South Florida, where she earned a bachelor’s degree in mathematics education before earning a master’s in educational leadership in 2000. She also has an educational specialist degree, also from USF.

Her teaching career began at Brandon High School, where she taught math before moving on to Sickles High. She was also a charter facility member at Riverview High when the school opened in 1998 before she moved to Bloomingdale High three years later to take the job of assistant principal. She stayed at Bloomingdale until 2012, when she was appointed principal of Eisenhower Middle School in Gibsonton.

Candidates to replace Shotwell at Eisenhower were interviewed Aug. 7. An announcement on a new principal was expected this week, according to Hillsborough County School Board officials.

Shotwell praised her predecessor as someone who always put his young charges and educators first.

She said of Heilmann: “He always made his decisions based on what was in the best interests of the students and teachers.  He truly cared about people.”

Establishing consistency is, Shotwell believes, her biggest challenge as she warms to her new position. “With a change in leadership, which is sometimes not easy for students, I want to set the community and students’ minds at ease that Riverview is still going to be the same community school and we will continue with the traditions that have already been built here.”

Describing the new appointment as the pinnacle of her career, Shotwell’s enthusiasm for the job is clear. “I am thrilled to be here and hope to be here for a very long time,” she said.

School Board members praised Heilmann at the July 29 board meeting announcing Shotwell’s promotion.

“You are taking the baton from an outstanding leader who has done many great things for this district,” said Board member Stacy White, who congratulated Heilmann on a “well-earned” retirement.

“I know there are many, many students and staff members that can look back through the years and know that you have touched their lives in big ways, so, thank you,” White said.

“You could ask anyone in this room (the School Board meeting chamber) about us (board members) and I am sure some would say good things and some would say bad things,” Griffin said.

But when it comes to Heilmann, “we have never had anybody say anything but ‘he is one of the most amazing people.’ I have heard nothing but good about you from this community. This district’s loss is going to be felt by everyone, so, thank you for what you have done for students because that has always, I know, been your number 1 priority. You are a shining example of what a principal and administrator is.”

Board member Susan Valdes said while Shotwell has “some big shoes to fill, I know you will fill them very well.”

Board chairperson Carol Kurdell complimented Heilmann on his “exceptional run” at Riverview High and cited him as a “shining example” of what “can happen, and we certainly appreciate it.”