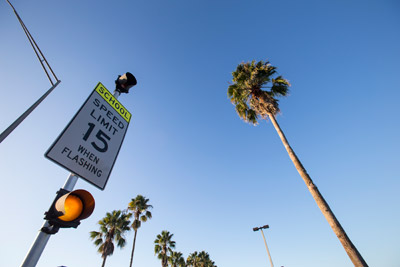 On Aug. 19, more than 200,000 students will return to Hillsborough County schools. With elementary school start times coinciding with the morning rush hour, drivers are urged to be especially vigilant of school crossing zones and of children crossing streets and highways. Mitch Traphagen photo.

On Tuesday, August 19, more than 200,000 students will return to classes in Hillsborough County, many of whom will be crossing busy roads during the peak of the morning rush hour.

While all South County schools have marked school zones, Gibsonton and Ruskin elementary schools, in particular, are located on busy, high-speed roads leading to I-75 that require a significant decrease from the normal speed limit.

The Hillsborough County Sheriff’s Office will be on patrol that day. Fines for exceeding a school-zone limit start at $143 for a mere mile per hour or two over the speed limit and can run in excess of $500 for greater infractions.

According to deputies, steep fines are in place to ensure that drivers appreciate the safety factor involved in children crossing roads to go to school. After a summer without the flashing school zone signs, and with expected traffic backups around schools, authorities urge commuters to think, look and drive with extreme caution, particularly beginning on Tuesday.

The Florida Department of Motor Vehicles also emphasizes that motorists must wait to resume normal speed until notified by the “End of School Zone” signs. Also, drivers should remember that passing a school bus stopped to load or unload children is illegal and a serious offense.

School crossing guards are hired and managed by the Hillsborough County Sheriff’s Office. Crossing guards are charged with reporting the license plate numbers of cars that do not slow down for active school zones or stop for children in the crosswalk after being instructed to do so. Crossing guards are on duty from 7:10 to 8:25 a.m. and from 2 to 2:45 p.m. for most area schools.

The Tampa Bay area has long been in the news as one of the most dangerous metropolitan areas in the nation for pedestrians.  Nationally, the number of pedestrians killed has been on the rise with 4,743 deaths in 2012, according to the National Highway Traffic Safety Administration. “Children age 15 and younger accounted for six percent of pedestrian fatalities and 18 percent of all pedestrians injured in traffic crashes,” the NTSA said in its most recent annual report.

While, in contrast to national statistics, the number of pedestrian fatalities in both Hillsborough and Florida has decreased slightly, the total still remains above the national average. According to Smart Growth America, a nonprofit national neighborhood advocacy group, there were 874 pedestrian fatalities in the Tampa Bay metropolitan area from the past five years of available data.

And with the continued growth of the county, particularly in South County, new and changed school zones could be in place.

With the 2014 school year, Thompson Elementary School will join Ruskin and Cypress Creek elementary schools to serve the growing South County population. Both Ruskin and Cypress Creek have been running in excess of district standard capacity for the past years. Thompson Elementary is located near Lennard High School on Shell Point Road. The school is the district’s first LEED-accredited school, with enhanced energy-efficient lighting, increased use of natural light and resource-efficient plumbing fixtures. The school was built for a capacity of 950 students. Named for famed Hillsborough County educator and administrator Vince Thompson, the school’s mascot is The Trailblazer.

According to Stephen Hegarty of the Hillsborough County School District, the new school’s initial enrollment is projected to be 750 students on the first day, rising to 800 students within the first few weeks.

The Hillsborough County School District is the third-largest district in Florida and the eighth-largest in the United States.

“Overall projected enrollment this year is 205,000,” Hegarty said. “We won’t hit that number until a few days or weeks into the school year.”

That would be a record high for the district, which first surpassed 200,000 students last year. 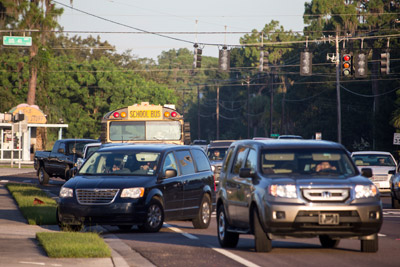 Congestion at the corner of US 41 and SR will be the daily norm once again beginning next Tuesday as Ruskin Elementary School opens its doors for the new school year. Mitch Traphagen photo.

Beginning on Tuesday morning, after a long summer, students in South County will again return to classes. Keep an eye out for children and school zone warning signs. Your careful driving may not only save your pocketbook but, more importantly, the life of a child.