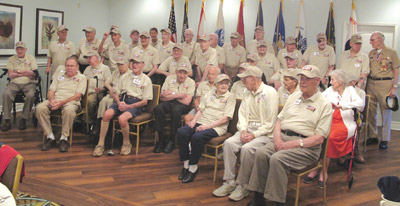 SunTowers resident retired Army Air Corps Lt. Col. Paul Swofford, who was a B-24 bomber pilot in World War II, was unbelieving and joyful as he and 36 other World War II veterans passed through the doors of the Plaza Club at Freedom Plaza last Friday. They were the guests of Honor Flight of West Central Florida, Freedom Plaza and the Retired Officers Corporation, who had decided to bring the National World War II Memorial from Washington, D.C., in the form of a virtual tour, to Sun City Center.

Swofford is 94 years old and was a heavy-bomber pilot for 24 years. After training, he graduated from the Army Air Corps flight school as a second lieutenant. He flew with the 445th Bomb Group and flew a B-24 bomber named the “Sweetest Rose of Texas.” 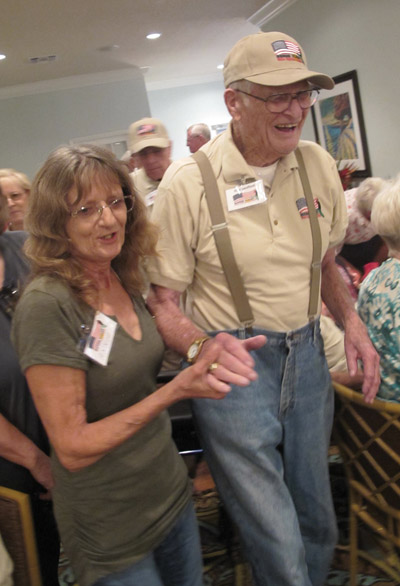 Paul Swafford served in the Army Air Corps during World War II. He was one of the 35 pilots with the 445th Bomb Group given the mission to bomb Kassel, Germany, where the Germans were making weapons. It was one of the most disastrous air battles fought in military history. Thirty-one out of 35 B-24 bombers were shot down. Swafford and his crew were among those who survived. Swafford was awarded a Silver Star.

The 35 B-24 bomber crews were assigned to bomb Kassel, Germany, where the Germans were building weapons. Attacked by waves of German fighter planes, the U.S. mission lost 116 crew members, and 122 crew members were downed, captured and held in prisoner-of-war camps.

Two other veterans, John Williamson and Judith Joyner, were glad to be among the honored guests Friday. Williamson served in China. Joyner helped to evacuate Germans from the occupied territories in central and eastern Europe.

“I missed my family and my children, but I was glad to serve my country,” Williamson said, as he reminisced about the war so long ago. 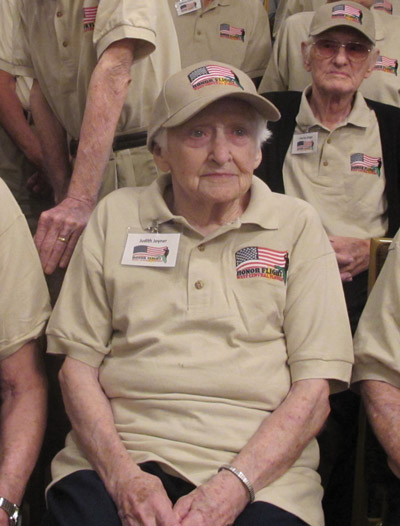 Judith Joyner, a veteran of World War II, helped to evacuate Germans from the occupied territories in central and eastern Europe.

A reveille was heard, followed by breakfast. The honorees were wearing khaki pants, shirts and hats provided by Honor Flight and were proud to be there. To have the chance to relive their war experiences and be with those of like kind, who had gone through similar experiences together.

The clamor of conversation reached a high pitch as they ate. It was a happy occasion, an exciting opportunity for them.

Connie Lesko, Freedom Plaza business development coordinator, said she had been a guardian twice with Honor Flight and fell in love with the program. Bruce Ford with Honor Flight stopped by to see Lesko in her office one day. He had an idea, she said: Why not plan the first “non-flight” honor flight for veterans locally, who could not make the trip to the memorial for one reason or another?

“Bruce Ford stopped in my office and told me what he was thinking,” Lesko said. “He and Corrina Fristad with Retired Officers Corp. worked tirelessly to make this happen. They [the veterans] love being with their comrades.” 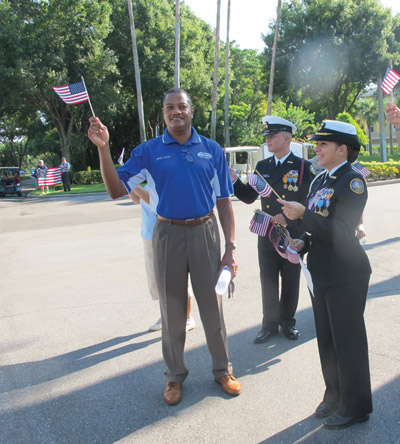 Later, the veterans crowded into trams to the Freedom Plaza auditorium, where they were surprised again with a patriotic event honoring them and their service. As they rode, the well-wishers along the route honored them by flying flags and wearing red, white and blue.

The first Honor Flight tour took place in May 2005, when six small planes flew out of Springfield, Ohio, taking 12 World War II veterans to see the memorial in Washington, D.C. By August, commercial airline carriers were used to transport as many veterans as possible at no cost to them. Partnering with Honor Air in Hendersonville, N.C., the Honor Flight network was created.

One man made it possible. Earl Morse, a physician’s assistant who retired from the military as an Air Force captain in 1998, was hired by the Department of Veterans Affairs to work in a small clinic in Springfield. His patients began talking about the Washington, D.C., memorial, after its creation in 2004.

Morse realized many of these veterans could not make the trip either physically or financially. He was also a pilot and a member of an aero club located at Wright-Patterson Air Force Base in Dayton, Ohio. Morse offered to fly a veteran to the memorial. The veteran broke down and cried for joy, he was so touched.

That was the first step in a dream that has been realized. At the end of 2012, more than 98,500 veterans had traveled to Washington to see their memorial. It is thought we are losing 800 veterans daily. It costs approximately $400 to take a veteran to the National World War II Memorial, or $50,000 to $60,000 per flight.

The Honor Flight Network is a 501(c)3 not-for-profit organization. For more information on Honor Flights or how to volunteer, email Honor Flight of West Central Florida at info@honorflightwcf.org, or call 727-498-6079. Donations may be mailed to P.O. Box 55661, St. Petersburg, FL 33732.

Locally, this memorial event was made possible by Honor Flight of West Central Florida, Retired Officers Corporation and Freedom Plaza. 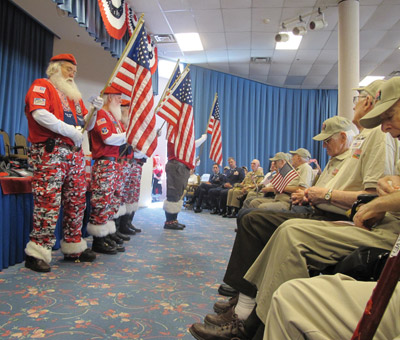 The Santa Drill Team gave a salute to those who fought on Iwo Jima, the first invasion on Japanese soil, resulting in a huge loss of life.