With a tagline of For Authors By Authors, Penny Fletcher opens Soaring Eagle Books. 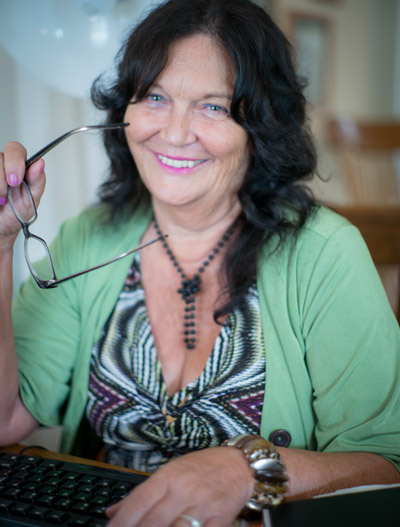 Penny Fletcher opened her eyes and gazed with weariness out the window, a weariness that she was too young to possess. She looked past the steering wheel and dashboard of the rusted-out car that she and her three children called home. Along with $300 in her pocket, the car was all she had. She had nowhere to go, had no idea what tomorrow would bring. She knew it could be bad, but she counted on something good. She felt it. Penny is an optimist — even when things seem dire. If she had any doubts, and it would have been hard to not harbor occasional doubts, she quickly pushed them aside. She knew she had things to do. She just didn’t yet know what they were.

Penny Fletcher looked up from the glowing computer screen, the browser showing the homepage of Soaring Eagle Books. It has been 35 years, and the rusted Ford is long gone. So much has changed since she arrived in Florida with an old car, a handful of cash and children in tow. She became a writer, and then an editor for one newspaper and then more than one, and now is a freelance writer with the Observer News publications. Despite her success, she is always looking forward; she has ideas and plans. Being an optimist is a trait that requires hard work to fulfill and maintain. Although past what some would consider retirement age, she looks a good decade or two younger. Her energy level would suggest three decades younger. At the end of last year, she founded and became the publisher of Soaring Eagle Books.

Soaring Eagle Books, by design, is a unique publisher in an industry that is in upheaval. Through her company, Penny is finding a path through that upheaval, hoping to bring success to budding authors who may not make the radar of the big publishing companies, companies that are increasingly under stress in a rapidly changing world, companies that increasingly appear to want to play it safe, promoting existing big-name authors for the best-seller lists, as well as to Amazon and the world’s remaining bookstores such as Barnes and Noble. Like the changing world of publishing, she decided that authors needed a new paradigm.

The first book out of the company’s gate was her own; it was a book that was the impetus for her new company. It was her sixth book, she already had three written under another name, and last year finished the third under her name. An agent represented her and all looked well. For a time.

“She had that book for six months and didn’t do anything with it,” Penny said.

So she decided to take matters into her own hands. And, in doing so, founded Soaring Eagle Books with several associates, including Liz Bleau, her former co-worker at the Tampa Tribune. In the long road that took her from that rusted-out Ford to becoming a successful and well-known South County writer, she had done many things, from managing a convenience store and driving a truck to being an editor. But this was her first foray into publishing. She knew she had a lot to learn and decided to use her own book to climb the steep learning curve.

“I made mistakes,” she said. “I made thousands of dollars in mistakes, with a video and other things. I couldn’t have done that to another author.” 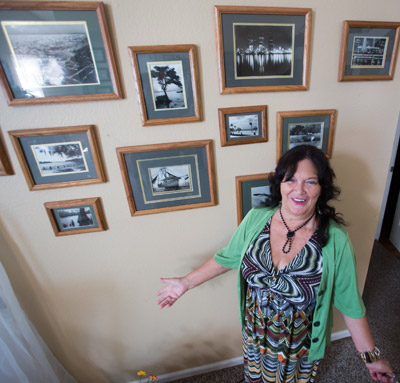 Thirty-five years ago, she arrived in Florida with $300, three kids and a rusted-out car. Things have changed considerably for Penny Fletcher since then. Being an optimist requires a great deal of work. Mitch Traphagen photo.

But now her book, Trial By Fire, is out and the learning curve appears more like a road upward. Since then, Soaring Eagle Books has published two more books with a third slated for release in November. Her core mission is unchanged. She intends for Soaring Eagle Books to be an entirely different kind of publisher.

“Nobody gets an answer these days,” Penny said of large, traditional publishing houses. “You send something out to a publisher and the vast majority won’t even answer. That’s the first big difference. With us, you get to talk to a live person. We are upfront about your work. Anyone can submit to us and we’ll read it. We are putting one author a month through the traditional publishing channels.”

According to Penny, Soaring Eagle Books will select 12 books per year to publish and promote at no cost to the author, much like a traditional publishing house. The company will then take a percentage of the sales. It is a risk, of course, and essentially the company is placing a bet on those authors and their books. Publishing, even in this technological era, is not cheap.

For the rest of their authors, the company provides a fee-for-service program. Both sides receive the same attention, the same treatment, and the same push for success. According to Penny, they treat all of their authors with the same dedication and commitment.

“We do the exact same things for the people who pay and the people we personally publish,” she said.

Before becoming a publisher, Penny was also a freelance editor for many hopeful authors.

“I had all of these editing clients coming through that were so good but they had to self-publish and no one even saw their books,” she said. “You can’t get into Baker and Taylor by self-publishing. And then you can’t get into bookstores.”
Baker and Taylor is the world’s leading distributor of books. Soaring Eagle Books, and thus their authors, is listed with that company.

Although eBooks are considered the future of publishing, physical books still play a large and even dominant role for many authors. For bound books, the company uses “print-on-demand” services, and Fletcher helps her authors by sharing the publisher’s discount she receives.

The company provides instructions for how to prepare manuscripts for submission. According to Penny, all of the costs involved are clearly spelled out upfront. They handle everything from formatting and pagination to book-cover design to the sometimes confusing requirements of barcodes, ISBN and EAN codes. And then, she said, they work to help sell it — through Baker and Taylor, through their website, through social media and, if desired, through book trailer videos.

“Everything is where they can see it,” Penny said of both the process and the costs involved.

The company tries to reply to authors within 10 days of submission. The process to create a book can take a few months. The process to gain sales can sometimes take a few years. According to Penny, she welcomes all new authors, but she is specifically looking for those authors with new ideas, who aren’t afraid of non-politically correct speech.

“We are breaking down old traditions,” she said.

Authors are signing up for their services and the company’s fourth book is on the way out. Since that day in 1979, looking out the windshield of the rusted-out Ford, so much has changed. She did what she needed to do, which included more than three decades’ writing and editing — a half-dozen books of her own, dozens of books for others and thousands of newspaper articles. And now, as a publisher, she has gone the distance.

Penny Fletcher looked up from her computer in her comfortable home in Riverview, Florida, and smiled; there was no weariness in her eyes, there was fire. She is more than just an optimist. She is a force of nature.