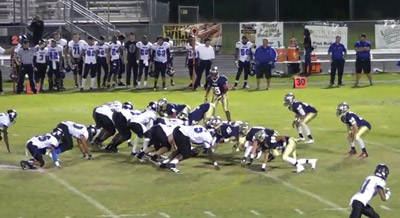 Riverview, in white, playing Alonso last year in a game they lost 42 to 13. The Sharks hope to be able to finish off some games this year. The team lost three games in the fourth quarter last season.

“There are three kinds of lies: lies, (darn) lies, and statistics,” according to 19th-century English Prime Minister Benjamin Disraeli in a quote popularized in the U.S. by Mark Twain.

So, to look at last season’s 2-8 record it might seem that Riverview had their heads handed to them on more than one occasion. But if they had been able to finish out some games, the Sharks could have been 5-5 — not a bad record for a young team facing powerhouse programs like Plant and Newsome in District 8.

But while he rues the missed opportunities of last season, Thornton knows the Sharks are in the process of building a team. “When you are rebuilding a program, you have to be close before you can win, and that is where we are now: where we have to start finding a way to finish games,” he said.

With a relatively young team, Thornton, entering his fourth season at Riverview, did not lose too many starters to graduation in May, but he did lose several important squad members to school transfers.

On the positive side, the team has a core of young players with experience.

“Some of our better skill players are still going to only be juniors this season, and we do have some senior offensive linemen for whom this will be their last year, so we are looking forward to them playing this year, so it’s a good mix.”

With a tough schedule this season, Thornton just wants his team to be able to compete with the big boys.

“We have a very, very challenging schedule,” he said. “When you look at it on paper, we hope we can just play well and execute and be competitive in all the games. When you are talking about having to play Plant — a nationally ranked team — Alonso, Wharton and Newsome, those kinds of schools, we just want to play well and see what happens.”

Thornton is looking for a strong performance from his offensive and defensive lines this season, with several returning starters. “We’ve got some decent size on both sides of the ball, and if we can get in shape we might use some kids sparingly to play in two positions,” he said. “Our linebacking corps is also a position of strength. We have a bunch of guys there that are all returning with experience. My question marks are going to be in the secondary and in the backfield, where we need to find the right mix of guys; that’s something we have to take care of right away.”

Experience will be key for Riverview’s hopes this year, Thornton said.

“When you are talking about playing high-level, state-of-Florida football and competing against schools with 2,000 students and above, there’s not a lot of inexperienced guys on the field, so when you have been through those games [against larger schools] and you are battle-tested, obviously that will be to your benefit. We are forced to play a lot of young kids, but when you line up against a traditionally powerhouse program like a Plant, they are not lining up a lot of freshman.”

Hal Roberson is one of those returning players with experience that the Sharks will be relying on this season.

A third-year starter on the defensive and offensive lines, Roberson said the Sharks can feel confident.

“I expect us to finish off our games and be a more physical team as far as returning kids with more experience,” Roberson said.   “I think we should feel we have an advantage over other teams and will win more than we have in the past.”