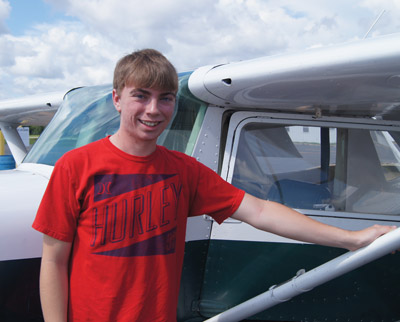 Florida teenagers usually can’t wait for their 16th birthday so they can drive a car by themselves.

Ryan Schultz of Ruskin earned that privilege on his 16th birthday, July 25.

The same day, he also earned the right to fly.

“I’ve been interested in flying planes since I was about 11,” he said in an interview the day after his accomplishments. His mother, Lynn Schultz, said he has been playing flight simulator video games as long as she can remember.

Yet, Ryan says his interest didn’t start with video games. A friend of his grandparents had his own plane and that seemed really cool to him.

“For his 12th birthday, my parents, Jackie and Steve Browning, got him a ride in a stunt plane, and he loved it,” said Ryan’s mother. “I was nervous, but I knew it was what he really wanted.”

His first lesson finally happened on Aug. 8, 2013, and covered (as Ryan put it) “simple things like ascending and descending. I was excited but I was a little nervous,” he added.

Most of his flying lessons took place in a Cessna 152, which is a two-seater, but a couple of times Ryan flew a Cessna 172, which is more powerful and seats four.

“His instructor, Dave Crew at the Plant City Airport, said he was ready to fly solo after 10 hours [of instruction],” his mother said. “But he couldn’t legally fly alone until he was 16.” 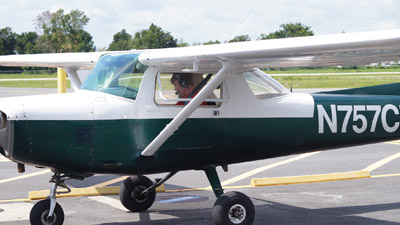 Ryan Schultz of Ruskin got his driver’s license and his student pilot certificate on his 16th birthday, July 25. He can now not only drive on the road by himself, but also fly through the sky.

So he counted the days until his birthday, and did the solo flight right then.

He’s thinking about college but has not yet made up his mind.

His long-term goal is to fly parcels for UPS.

“It’s a really good paying job, and there’s a lot less pressure with cargo instead of a lot of people on board,” Ryan said.

As for now, he can fly by himself but can’t have passengers until he’s 17, when he can get his private pilot’s license.

“The minimum age for that is 17,” he said. That, he said, will be doable next year but not flying as a job. “I would need a commercial license to fly for money. For any job,” he said.

Getting that would take another type of instruction and test, regulated by the FAA, his father said.