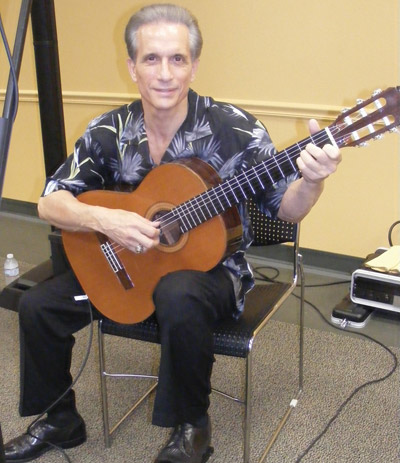 As a teenager, Charles Calandra taught himself to play guitar by ear but couldn’t read music.

“I’d listen to something and then pick it out,” he said as he was setting up for his performance at the South Shore Regional Library, July 18. “I played in a band when I was 12 or 13, but then I gave it up until just a few years ago.”

He gave it up to attend Valparaiso School of Law, Valparaiso, Ind., and now lives in Tampa and is licensed to practice law in Florida and New York.

One day a woman at a party in his house noticed he had guitars and asked if he played.

Yes, said he, so she brought her violin over and introduced him to classical guitar and the beauty of a blend of the two stringed instruments.

“It was always as though I heard music in the air. It’s just out there,” he said, gesturing around him. “I had heard of the Suzuki method, where people play music while their child is in the womb, and then expose it to the same music in the nursery and again a few years later so that when he or she is given the first music lessons, the child already has an appreciation of the music, and can feel it.”

He kept hearing music in his mind, and knew that somehow he had to learn to write it.

“But I’d never studied music, and I couldn’t notate,” said Calandra. “I couldn’t even read music, let alone write it.”

Since music was already in his head, he knew he had to learn to get it out, so painstakingly he taught himself to read notes.

“There are only seven notes. Seven! Twelve, counting the sharps and flats. I knew I could do it,” he said, almost breathlessly telling his story. “From those few notes, musical combinations are infinite.”

Once he learned to read music, he began to teach himself to write it.

He looked for the best program and finally settled on one called Finale.

“I understood it because it was based on math. It just came to me,” he said, snapping his fingers, remembering a light-bulb-moment.

“It was very exciting because now I could write the music I heard in my head down. I didn’t name my songs, I numbered them. That’s because I might start one, go on to another, then hear another part of the first. Each time I finished a piece, I’d give it a permanent number and move all the others up.”

Now some of his songs are named, but not many.

Always having played on a steel-string guitar, now he was also playing acoustic and other types of guitars. He bought sound equipment and decided to record a demo.

All the while, he kept practicing law.

One day that he was at the Emerald Recording Studio in Oldsmar, a concert violinist came in with her resumé — and that’s how he met the other half of his duet team “Tandem,” Ellen Fackler. 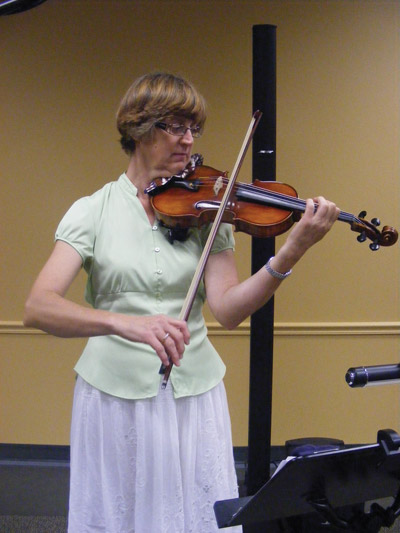 Fackler is a classically trained violinist who received her master’s degree at the University of Northern Colorado and had been playing professionally for 30 years when she and her husband Scott moved to St. Petersburg, where they now reside.

“We moved here from Portland, Oregon, where I had been playing with the Vancouver Symphony — not Vancouver, Canada but Washington State,” she said. “I was at the studio to see how to break into music here when we met,” she said of Calandra. “He came in and said ‘I need a violinist’ while I was there.”

While still seeking work with a symphony, Fackler says she is enjoying playing with Calandra in a duet they call Tandem. The two have played around the county and came to South County after a performance at the new Central Avenue Library in Tampa in June.

He now has 18 songs finished.

“My songs have no words, but each one has a story,” he explained. “First, I tell the story, then I play the music. Hearing the story helps people understand the music.”

For example, song Number 10 is about the beauty of the cactus flower that opens every night only at midnight and then closes.

“I have never taken a theory lesson, and I am now studying music at a college level,” he said. “I hear the music but I want to learn more about the notes. All I can learn about the music of the 1700s and 1800s. Music demands crescendos. A start and an end. I love learning about the Masters.”

Guitar and violin make a beautiful combination of strings, he said.

To book Tandem, people may email Calandra at cscesq@tampabay.rr.com.

At the SouthShore Library, reading to four-legged friends