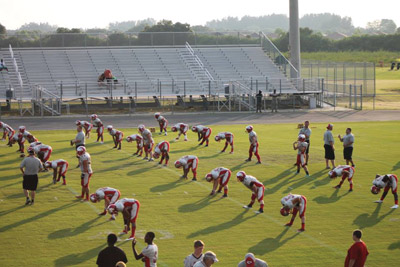 East Bay football took a body blow in May, losing 24 seniors from the first team by graduation, but coach Frank LaRosa and his players are confident they can repeat as District 8 champs this year.

After consecutive 4-6 seasons in 2011 and 2012, East Bay compiled an impressive 8-4 record last year, the team’s best record in a decade.

“After the successful season we had last fall, I would like to take the next step. We need to raise the bar,” said LaRosa, who guided the team to a 34-14 postseason victory against Gaither last year. East Bay went down 27-0 in the next round of the playoffs against Sickles.

It will be a big task for a team that lost so many players. “There’s definitely a lot of new faces, a lot of inexperience,” LaRosa acknowleged. He said replacing players, many of whom were multiyear starters, is no easy task — not just on the field “but replacing their leadership and that team chemistry will be the hardest part.”

LaRosa said he won’t be measuring success by wins and losses this season.

“If we are getting the best out of our kids and coaches, the rest will take care of itself. We just need to put the best product on the field possible,” said LaRosa, who has a 16-16 record in three seasons at East Bay.

Eric Latortue and Marques Ford, defensive stalwarts and three-year starters, will serve as co-captains on this year’s team. Both say East Bay is more than capable of defending its district title.

“It’s not about what we have lost but what we can do now to better the players that we have,” said Ford, a defensive end. “We’ve been practicing and training as hard as we can. We are going to be fine as long as we train hard and do what we need to do to get better.”

With the team now doing weight training, Ford said they just need to practice to improve. “As soon as we get in the helmets and shoulder pads, we will be fine as long as we are focused on getting better.”

“Our expectations are high this season,” said the middle linebacker. “Our schedule looks good and we are confident because we are the district champions. We just want to get back on the field and do our thing.”

While improving team speed and strength during the offseason has been a priority, LaRosa wants to see the team develop its own character.

“The most important thing is team chemistry,” he said, “just how the kids work and interact with each other, pick each other up and help motivate and inspire each other.” While football might look a battle of the biggest and strongest, LaRosa said chemistry is the intangible that separates the good from the great.

“Coaches know it’s key to success. If you ever listen to a successful team’s postgame press conference, you will notice they always talk about team chemistry in the locker room. It’s the media that doesn’t understand how important it is.”

The team’s offensive and defensive line look to best weather the storm of graduating seniors, retaining several starters from last season. “Those guys have been busting their guts in the weight room and are helping lead us,” LaRosa said.

To the East Bay’s loyal fan base, LaRosa is asking for their continued support and made a promise. “We will put the best product we have out there, and we will definitely make it exciting, that is for sure.”

Understanding Medicare: Parts A, B, C and D