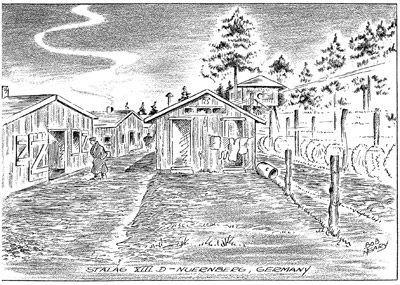 Bob Neary, who bunked with Donald Durant at Stalag Luft III, wrote and drew about the details of camp life there. Contributed by Sallie Durant

World War II veteran Donald Durant, who retired as a lieutenant colonel and as a member of the Joint Chiefs of Staff in the Pentagon, spent 10 months as a prisoner of war at Stalag Luft III in Sagan, Germany. The camp was moved to Nuernberg, then to Moosburg before the POWs were liberated on April 29, 1945, when Gen. George S. Patton marched into the Moosburg camp. [Nuernberg is better known in the U.S. as Nuremberg.]

Bob Neary, who bunked with Durant, recorded the events that led up to their liberation that day.

“Sunday, April 29, dawned and the air was tense with excitement. The artillery apparently was just over the hill, north and northwest of us. As Sunday Mass in the middle of the recreation field ended, bullets began to whistle through camp amid the chatter of machine gun and rifle fire. We then knew that our boys were beginning to push through the area. During the next few hours the majority of men lay low to escape the bullets coming through camp; but a few were injured slightly despite this precaution, as action continued around the edge of the camp toward Moosburg,” writes Neary. “Early in the afternoon, resistance ceased and Moosburg fell. As I recounted earlier, Patton’s Third Army came into camp and was welcomed almost tearfully by the thousands of prisoners, who couldn’t realize that they were free men again. The barbed wire embrace was not to be forgotten so easily.” 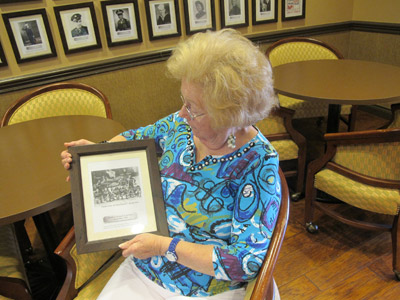 Sallie Durant, Donald Durant’s wife, holds a photograph of the plane and the crew before it was shot at and hit by the German Luftwaffe in April 1944. Lia Martin photo

Sallie Durant has provided a glimpse into Durant’s military career and Stalag Luft III because her husband, Donald, is unable to speak for himself. Originally from Buffalo, he is 91 years old and suffering from Alzheimer’s disease. Both live in Sun City Center. She feels his record with the military is one that should be shared, so that all who read it can honor the men who served their country as POWs.

Parts of the written record she has that tells this story were contributed by her husband Donald Durant, and by Neary in the form of words and drawings. Donald Durant wrote down in a small book the titles of all the books he read while a POW, a list of Red Cross rations, two drawings, and songs written and sung by the 10,000 soldiers at Stalag Luft III. 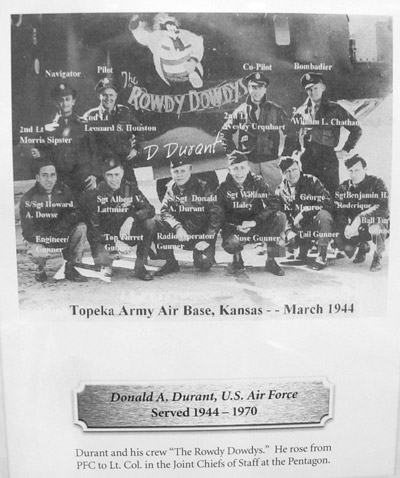 According to Sallie Durant, her husband flew with the “Rowdy Dowdys,” the 450th Bomb Group, on a B-24 bomber flying to Germany. Donald Durant was a radio operator and gunner. The plane he was in was fired on and hit by the German Luftwaffe, but it was able to continue flying. The airmen began throwing everything out of the plane to lighten the load, so it could climb over the Alps. Four men, including Donald Durant, parachuted out of the plane on April 25, 1944. The rest of the men stayed aboard and survived, spending the remainder of the war in Switzerland where the B-24 had landed.

“Don said that he went down on the side of a mountain and he was burying his parachute when a beautiful, buxom woman weighted down with pistols came up to him and asked him for his parachute,” Sallie Durant said. “She was with the Italian Underground partisans. She was a tough woman. They were with the Underground for six weeks and went from mountaintop to mountaintop with them” until they were captured by the Germans. 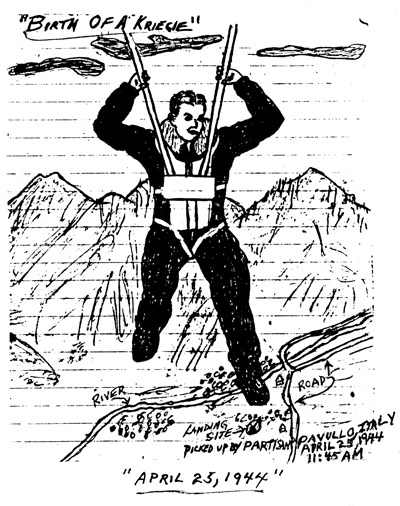 Donald Durant later drew himself parachuting from his plane with three other men. Contributed by Sallie Durant

Stalag Luft III translated is “Camp Air Three” and housed flying personnel prisoners. The original Luft III camp was situated at Sagan in lower Silesia, 100 miles southeast of Berlin and 75 miles northwest of Breslau. West Camp of Luft III comprised 17 barracks, a cook house, theater, shower building, laundry building and fire pool. Each barrack had a central hallway with rooms on both sides. In addition to the 13 rooms, which would accommodate from two to 15 men each, was a washroom, tiny kitchen and latrine.

“Each cooking group was assigned a scheduled period, usually rotating, on the communal stove. A limited amount of pressed coal was supplied by the Germans for cooking purposes,” writes Neary. “Each night German guards made the rounds at 10 p.m., barricading the barrack’s doors with a wooden bar that may be seen in its withdrawn position in the drawing … The Germans enforced this rigidly and on several occasions fired into lighted rooms to impress its occupants with the gravity of their offense.”

There were also shallow tunnels that ran the length of each barrack building so that the German guards could listen to the airmen’s conversations.

Red Cross food parcels were issued, one parcel per airman each week at Sagan until a shortage cut the amount to one-half parcel per week by Sept. 11, 1944. The parcels were sent from the United States, Canada, England, Argentina and New Zealand through Switzerland and Sweden. The favorite and most frequently issued parcel was the U.S. No. 10, which contained cigarettes, Army ration chocolate, oleomargarine, Army K-2 crackers, cheese, sugar, soluble coffee, corned beef, salmon, powdered milk, one cake of soap, pâté, jam, meat roll and prunes or raisins.

“At this point, I wish to take the opportunity to express my gratitude for indispensable service rendered by the Red Cross during the hectic days of internment in the Reich,” writes Neary. “I feel sure I am speaking for the other thousands of prisoners of war, who to mention one of many instances watched the arrival of several American-made Red Cross trucks laden with food parcels at a time when morale had reached a new low and food was practically non-existent at Nuernberg. To the Red Cross, my humble thanks.”

By January 1945, the Germans evacuated the camp and marched 10,000 airmen from Sagan, Germany, as the historic Russian push into eastern Germany threatened the camp. According to Neary, the German Luftwaffe, who were in charge of the camp, were determined at any cost to prevent the liberation of highly trained airmen by the rapidly advancing Russian armies and resorted to a “last ditch” effort and marched the men toward the southwest as a blizzard and below-zero temperatures prevailed.

“Artillery fire was audible to the northeast. The rate of march was very rapid at first, but soon slowed … That first night will be remembered for the relentless drive into the teeth of the snow,” Neary writes in his journal on Jan. 27, 1945. “There wasn’t sufficient room to shelter all the men that were constantly arriving, so groups took turns warming themselves inside while others waited in the blizzard.” 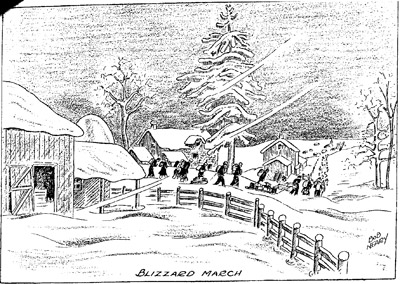 Snow fell for four days. After six days and 62 miles, the airmen were loaded into French boxcars for the next two days to Nuernberg. Fifty men were packed into each boxcar. Their destination was Stalag XIII-D, on the edge of Nuernberg. This camp had been evacuated by Italian officers’ prisoners of war to accommodate the evacuees from Luft III.

For four months, the prisoners of war lived in a nightmare of large-scale air raids, lice, bedbugs, fleas and food shortages. The “green death” soup was a concoction of ill-tasting worm-ridden dehydrated vegetables and the “gray death” soup was made with flour and water.

According to Neary, on April 4, 1945, invading American armies caused the second evacuation — to Moosburg and Stalag VII-A, nearly 30 miles north of Munich and the same distance from the ill-famed Dachau concentration camp. He said his group made the 91-mile trip in 10 days.

A week before their liberation by Gen. Patton on April 29, 1945, the airmen could hear artillery fire in the northwest. German ME-109 Messerschmitt and FW-109 Focke fighters were seen every day “hedge-hopping” over the camp at treetop level as they attempted to escape observation from higher-flying American fighters.

It is little wonder that the POWs of Stalag Luft III began to meet after World War II ended. Sallie Durant said that the last time her husband Donald met with Bob Neary was in California some 48 years ago.

On that occasion, Durant wrote in a book: “The Germans moved us out of the camp on that date due to Russian advances in the East. I last saw Bob at ‘Camp Lucky Strike’ in France on our way back to the USA during May 1945.” The entry by Donald Durant was signed March 15, 1993.

Donald Durant was 19 years old when he jumped out of that airplane over Germany. He met and married his wife some 40 years ago, but his time as a prisoner of war will serve as inspiration to others. 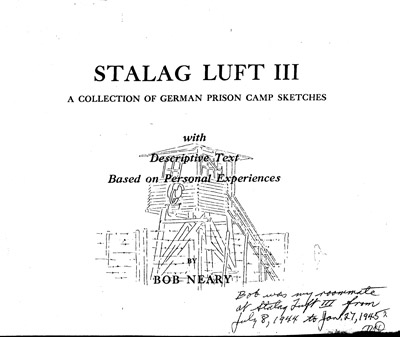 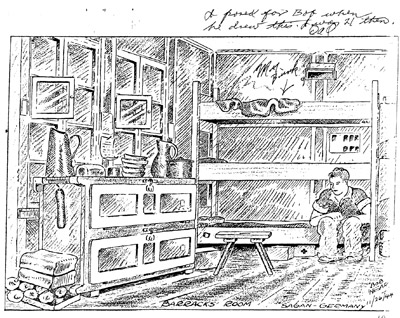 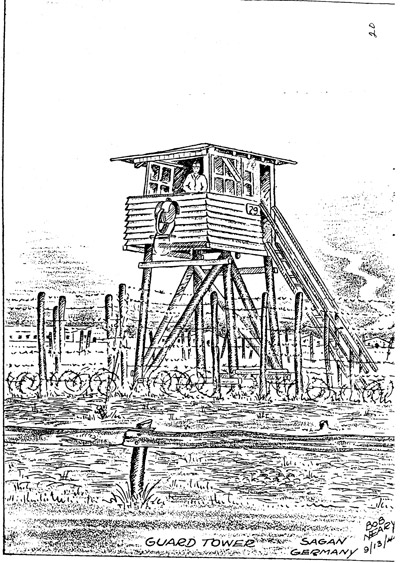 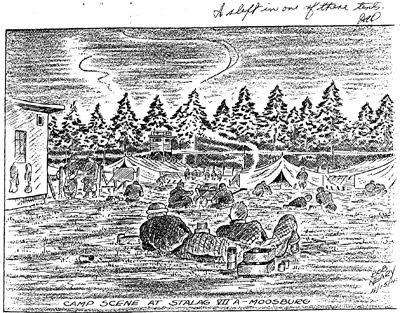 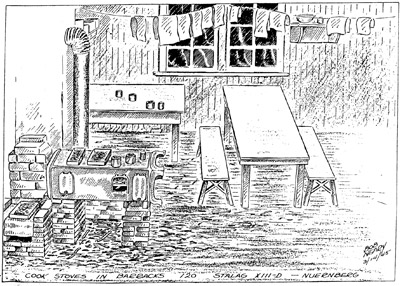 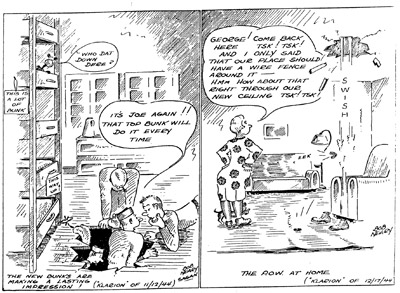 Southeastern Guide Dogs for the sight-impaired