Home News Riverview mom in fight of her life
News

Riverview mom in fight of her life 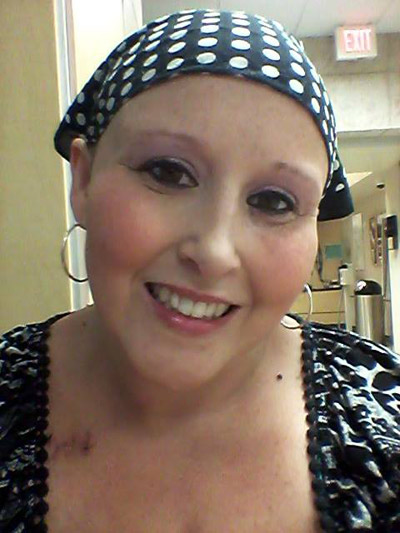 Sherry Lynn Meek has been battling cancer for almost a decade.

Dunk a basketball or hit a few home runs and you are lauded nationwide as some kind of superman.

And then there’s Sherry Lynn Meek.

The Riverview mom has been in and out of hospitals so many times in the last decade that she could have her own bed there. But despite being unable to work due to her illness, and a clutch of medical bills that would choke an elephant, you rarely see her without a smile.

“Even though it’s stage 4 [cancer] she still has that hope and faith that God is going to heal her and see her through this,” said Sherry Lynn’s mom, Stephanie Meek, while caring for her daughter after a difficult bout of chemotherapy. “She’s up every day, moving around, drinking lots of fluids, but it’s not easy.”

Sherry Lynn was diagnosed with cervical cancer at 24. Within a year, and after regular cancer treatment, it was gone. Then, at 28, she found out she had stage 2 breast cancer. A newly single mom with two young children, Sherry Lynn had surgery only to find out the operation had missed a tumor. Finally, after many treatments, she was told she was cancer-free in October 2010.

Feeling good, working and taking care of her children, Sherry Lynn was enjoying a normal life. “Then I started to get bad headaches and my neck started to swell,” she said. “This went on until I finally went to the doctor and was diagnosed with Hodgkin’s lymphoma.” The illness is characterized by swelling of lymph nodes in the neck, armpits or groin, persistent fatigue, fever and unexplained weight loss.

Now 33, she’s in her third battle with cancer.

“I’ve lost everything I had and I am now staying with my mother for around-the-clock care,” she said. “All I want is to beat this and have a normal life with my kids and family.”

Fighting cancer for almost a decade has taken a financial and physical toll, but her indomitable spirit and faith remain intact.

“There are times I want to give up, like now. I have nothing: no car to get around for my kids, I had to sell it to get medical treatments and medicine. I can’t work because my hands won’t hold still long enough. I lost my home because I couldn’t pay bills, but I’m still trying to keep the faith.”

She is praying this is the last time she will be in the fight of her life.

“This isn’t my first time fighting cancer, but I pray it’s my last time,” Sherry Lynn said. “I’m really fighting my hardest this time, but my body is rejecting the chemotherapy, and yet it’s working.”

Sherry Lynn must rest for seven days after treatment, such is the power of the therapy. This has left her unable to work, leaving her depending on family and friends.

Now saddled with medical insurance issues, Sherry Lynn said her friends came up with the idea of a car wash to defray some of those costs. It was held last month at Autozone, 7418 U.S. 301, and sponsored by the Riverview High Parent Teacher Student Association.

Mayte Ortiz-Lleras, who helped spread word about the car wash, said seeing Sherry Lynn’s family rally around her has been a privilege to watch.

“Sherry Lynn has a great fighting spirit,” she said, “and her mom is the nicest person you would ever want to meet, but she is like a lion caring for her cub the way she looks after her daughter. It’s an awesome family. They have been willing to do everything and anything to help Sherry Lynn,” said Ortiz-Lleras, who first heard about Sherry Lynn’s struggles through her daughter, who attended Riverview High School with Sherry Lynn’s son.

“It’s sad because they are fighting cancer, but it’s a beautiful thing to watch the way the family has come together to help,” said Ortiz-Lleras, who used social media to spread word of Sherry Lynn’s battle.

“She has a great spirit, considering this is not the first time she has battled cancer,” Battle said. “She has lots of energy and a great family around her. She’s a strong, persistent person. She seems more worried about what is happening to her family than what is happening with her.”

For more information or to help, visit Sherry Lynn’s page on Facebook, https://www.facebook.com/sherry.lynn.399041.

Pioneer partnership could prove a big boon to area

Enjoying the puppy days of summer