Pioneer partnership could prove a big boon to area 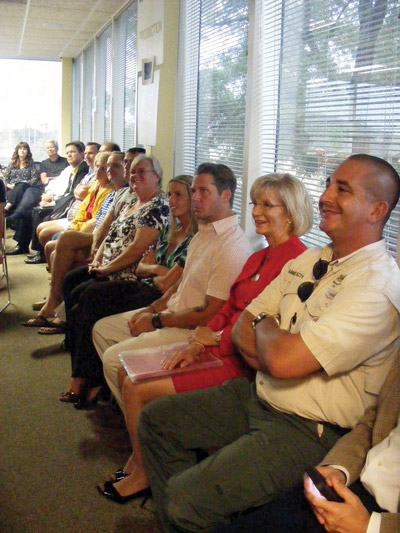 County Commissioner Sandra Murman, second from right, and members of the Hillsborough County staff from various planning agencies await their turn to explain a multifaceted project in Apollo Beach. The plan includes what is considered a first-of-its-kind partnership between business, the private sector and a nonprofit organization.
Penny Fletcher photo

A  business, county government and nonprofit agency partnership is the first of its kind in the area and could be a pilot for other projects both here and in other areas of the country.

Several things were crowded into the July 16 meeting of ABWIG, or Apollo Beach Water Improvement Group, held at Century 21 Beggins.

The house was packed to overflowing with ABWIG members who have raised more than $250,000 in private donations and community projects to dredge the Apollo Beach canals that sometimes are so dry, especially at low tide, that boats are landlocked at their docks.

Len Berkstresser, ABWIG’s president, explained that although the money to dredge the canals had been raised by the public through donations and projects, there was still more work to do because new conditions of permitting and compliance had drained more than was expected from the funding total.

“We never want to have to go through this again,” he said. “And we don’t want other residents to have to go down the same road 10 or 20 years from now, either.”

When the current board members took their seats in 2011, permits were already in place to do the ABWIG dredging, but the new board saw immediately that the area where the work was permitted would be beneficial only to the developers of one particular property.

“We had to change things for the benefit of the community as a whole,” said Berkstresser. “What we saw that had been permitted in 2009 wasn’t going to affect anyone except a certain piece of property. But since then, new things like seagrass mitigation and endangered species that were not a part of the original permitting had been put in place, and we had to abide by them. Finally though, we have received our new county permit, and expect our State and Army Corps of Engineers permits any day.”

When completed, the canals will be 9 feet deep and 60 feet wide, and the focus of the whole project will have changed to benefit the community in both the short and long run, he said.

It was explained that on May 15, County Commissioner Sandra Murman requested $771,000 for a new breakwater project and that it had been approved by Hillsborough County. This project is different than those done in 2010 and 2012 because it is designed so that the fill sand will not go back into the Bay with the tides and storms as has happened in the past.

Projects costing $51,000, $9,800 and $270,000, respectively, have already been completed during the last four years to reduce erosion in the Apollo Beach Nature Park.

The new project is designed so that sand washing away during storms will be redirected back to the shorelines instead of out into the Bay.

Between 10,000 and 11,000 cubic yards of dredged material will be brought to the beach. Because both affect the local waterways, the county’s beach erosion project and the community’s canal dredging project are being discussed simultaneously.

The dredging work will begin with the southern canals and work north because of the dates they must each be clear due to the danger of manatees seeking refuge in the warmer waters TECO’s discharge provides.

“It must be finished by Nov. 15,” explained Stuart Messman of the Florida department of Fish and Wildlife. Early in the program, Messman had discussed boating hazards and other safety issues. He stayed to talk about waterway improvements, especially those involving channels from the canals.

A third project was surprisingly put on the table during the meeting when the Tampa Electric Company and the Florida Aquarium became involved — setting the stage for a unique three-way partnership.

Mark Haney, John Muller and Margo McKnight, all from the aquarium, explained what the aquarium plans to do with 18 acres of nearby land donated by TECO.

“We’ve been looking for an offsite area for special projects because we have no space to grow except to go straight up,” said Haney. He says they plan to use part of the acreage to give children from throughout the state hands-on experience with marine life.

“We send 100,000 kids a year through programs now,” Haney said, “and we teach teachers how to teach about marine life. Even though they’re not funded for this, they’re required to learn it. We’ve gotten $5 mil [million] from Fish and Wildlife and $2 mil from the state to go forward with this,” he added.

A coral greenhouse where endangered species of coral are being brought from the Keys and other places will be built, along with a fishing pond for youth, and this will be combined with walking trails and other areas already being developed and donated by TECO.

It will also include hatcheries and have a goal of eventually returning some animals to the wild, the aquarium’s McKnight said.

Why take on all three of these projects in one meeting: the canal dredging, the restoration of Apollo Beach and the use of nearby land by the Florida Aquarium?

“South County is not using its waterways to attract tourism,” said Commissioner Murman. “In fact, this is the reason I am also supporting the ferry project being discussed near the Schultz Preserve. I can see sightseeing eco tours going all along our shoreline from Tampa through Apollo Beach and Ruskin, enjoying all the beauty we have here.”

The aquarium is also thinking about providing kayaking and other attractions that would appeal to tourists.

“This is a very unique thing for a business, a county and a nonprofit agency to partner together,” Murman said. “I’m hoping it will be a pilot for other areas of the country to do the same.”

People who want to learn more about ABWIG or donate or assist with the canal-dredging project may visit abwig.org

Riverview mom in fight of her life